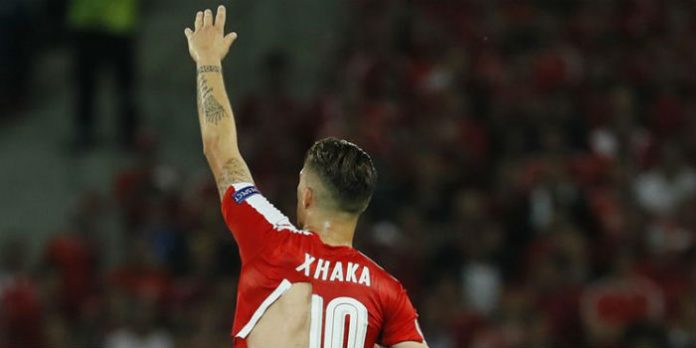 The final round of Group A matches saw Laurent Koscielny’s France take on Granit Xhaka’s Switzerland, here’s how they got on…

Laurent put in another solid performance as France secured their second clean sheet of the tournament. The centre-back had the measure of young Swiss striker Breel Embolo from the off and was decisive in his marshalling of the France back four throughout. A clumsy collision on 83 minutes earned him a booking, but as it’s the end of the group stages that will be wiped before Les Bleus’ first knockout game.

Olly sat on the bench for the full 90 minutes as Andre-Pierre Gignac laboured up front in his place. The French probably had more cutting edge than their opponents in the final third but the woodwork denied Paul Pogba and Dimitri Payet in either half. There’s a decent chance Giroud will be thrown back into the fray come the knockout stages. He also gave Granit Xhaka a big hug at full time.

Granit ran the game for the Swiss from his position at the base of the midfield. As the link man, it’s hardly surprising he made more successful passes (84 / 89% completion) than anyone else on the pitch – 26 more than Johan Djourou in second place. In the final third our new boy completed all 15 passes and his 10 ball recoveries is also a notable stat. (Stats via @StatsZone app)

He also had his shirt ripped twice – four Swiss Puma jerseys were torn in total – on a night when the ball went pop…something Arseblog News has never witnessed before (in the professional game).

Arteta: Xhaka will be missed but injury could have been worse

Granit’s passing was so sharp and incisive. To think he found his man several times, when all routes were apparently blocked off to him.
Looks like we’ve go a player here lads.
CYOG

According to Neil Lennon, Granit is the new Charlie Adam!

Wow, high praise from a pundit who clearly knows his stuff.

Thought Xhaka was excellent, played that metronomic role with ease, keeping things simple when necessary and mixing his passing when given space.

He also has the technical ability to get himself out of trouble in tight areas – typical Wenger signing in that respect.

That said, he’s not what I expected. From what I’d heard before the Euros I thought he’d be charging around wiping people out, but he’s definitely more Arteta than Coq.

Oh no no, he can be ferocious when he needs to be. He’s a combination of Arteta and Coq. He’s got a great shot as well on that hammer of a left foot. Really excited about next year’s midfield. It’s certainly going to be a fight for places when everyone is fit! Coq, Elneny, Rambo, Wilsh and Santi vying for 2 CM positions… exciting!

Such a bro moment, that gif. Memories of bro-ness came flooding into my head. I imagine Blogs and James sharing a hug like that after every successful Arsecast Extra.

What a shock !!! Arsene bought a decent player to Arsenal ?? I would never have bet on it. That Arsene is a dark horse, aint he..

we are just too lucky to get this guy signed, what a smart move for us.

midgunner
Reply to  Me So Hornsey

Agreed, what the fuck is Dier doing anywhere near the England team while Jack’s on the bench?

I know I’m biassed but if he’s anywhere near fit, Wilshere is England’s best midfielder by a mile…

I think Dier’s been very good for England as a defensive midfielder, good passing and disciplined. He’s got good height so handy defending set pieces and scored a good free kick.

He’s the kind of player we’ve missed for the pass 5-6 years.

A Different George
Reply to  midgunner

Be serious–they offer entirely different things. I am a great admirer of Jack; he is the only England player who can drive forward and take people on, and he offers great vision, but he cannot play the Busquets role. Dier is the closest England have for that.

Dier is a specialist defensive midfielder thats why lol…

I showed this to my mom, she confirms that that was a genuine hug. Kudos.

Definitely more of an arteta than a charging bull. Watched him intensely in all their games so far and I like what I see. Composed and controlled. Rarely crosses the center circle, clearly heeding the instructions.
I think playing elneny next to him will give us so much motion and simplicity that will leave teams confused. He makes keep it simple an art

From what I’ve seen of Xhaka so far, he reminds me of a young Fernando Redondo. And he was one hell of a player in his day.

Redondo…now there’s a memory. Forgive me if I’m wrong but he did some sort of back heel whilst running forward around Neville in champs league.
If I’m wrong il get my coat and apology will be on the side…

NO I was right…except it was May I think. But still what a player. I see from the other videos what u mean by comparison

Obviously, like the rest of you guys I’ve been paying close attention to Xhaka’s performances after having only seen him play a handful of times last season (impressing everytime). Love his distribution, he has that ability to play a forward pass between the lines which not many central midfielders actually have, can imagine those passes finding Ozil’s feet quicker than we currently get him the ball, which will hopefully bring about more space for our magician! We have the best midfield on paper (don’t mean a thing I know) in the league, add a clinical striker to our ranks and… Read more »

Some people will never be satisfied. I now see post complaining that Granit doesn’t do anything and merely passes the ball around and all we need is another pass master. I guess the casual amateur does not see the sort of 90 yard raking pass this bloke is capable of and the defensive positioning he takes up that afforded the Swiss team plenty of possession. Koscielny had a good game too. He’s such a technically talented defender. Did not get to see Giroud of course as they were protecting him with the yellow away from a suspension next match. That… Read more »

It was an interesting contrast watching Pogba and Granit.

Granit plays a more quiet consistent game particularly with positioning where he plays the other side into a tight corner. Its his decision making which is exceptional. He elects the most effective course rather than the spectacular acts more like a quaterback (in American sport) but has the ability to find you up field with a long pass.

Both were excellent and different.

I agree that both midfielders played well.

However, I think Pogba needs to improve his decision making in terms of
when to run with the ball, and when to make a simple pass instead (and
let the ball do the work, as it were).

Let’s hope Granit hugs Ozil in the absence of The Flamster?
😉

Seen the ball burst in a bayern match once. Think it was Van buyten.