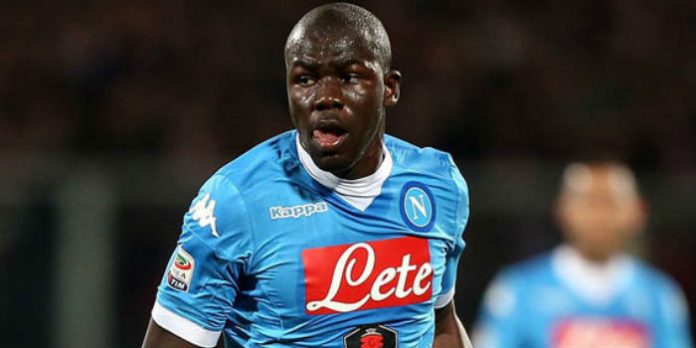 Last month a couple of reports in the Italian media linked Arsenal with a move for Napoli defender Kalidou Koulibaly.

We weren’t the only club touted as a possible destination for the 24-year-old Senegalese international, Chelsea, Manchester United, Bayern Munich and Real Madrid were also listed as interested parties.

The player himself has now gone on record saying he expects to leave the Stadio San Paulo this summer after receiving a number of offers.

“My situation? I have three years on my contract,” Koulibaly told L’Equipe.

“I was very happy at the time when I signed a five-year deal but now I had a great season and I have many offers on the table.

“I want to make the right decision from a financial and sporting standpoint.

“Many great clubs want me and I have no news from Napoli. I get the impression I may leave. I want to keep growing perhaps by going abroad.

“Have I spoken to [new Chelsea manager] Conte? No, but it could happen. If Napoli doesn’t contact me I will start talking to other clubs.”

Napoli have already suggested that the player isn’t for sale so this could well be a ploy to secure a new lucrative contract. Either way it doesn’t look like Arsenal are in the driving seat.  Our poo-o-meter rating is high…

Our poo-o-meter rating is high…

“Not truth at all” – Arteta dismisses links with Stones & Kessie

damn it. liked his robust style a lot having watched his youtube video. knew it was too good to be true.

Arseblog and Arseblog News – could you put the number of poos in the title of the post (Koulibaly plays up exit talk (8)) so we don’t have to look at ones like this if we don’t want to.

An 8 is pretty unlikely to happen. He has a long contract, has not mentioned Arsenal and it is probably him trying to get a raised contract offer from Napoli, so nothing to see here.

I agree if it is 5 poos or less ie there is a chance of a signing.

Otherwise the surprise is why the highly unlikely transfer has been posted up here. And I’m happier not to have that waste of time.

Why not put the entire article in the header so arseblog gets no clicks at all. They’d be like a charity!

Yes that works well, you must be a SEO expert with that quality of recommendation.

We can all go to http://www.newsnow.co.uk/h/Sport/Football/Premier+League/Arsenal if we want to waste our time reading rubbish about Arsenal transfers that aren’t going to happen.

I’d rather visit a news site that has news, not unlikely speculation.

I am always quite surprised by my own poos

If your time is so very precious why don’t you skip to the end and count the poos yourself?

Some people honestly can’t count. They depend on someone else giving them the total figure.

Sounds all too similar like Rooney ripping United off of that 250k/week.

BUY ALL THE PLAYERS

Dang it, I read that as eight tasty looking pool.

“If Napoli doesn’t contact me I will start talking to other clubs.”

Hah, they did speak with you.. 2 years ago when you signed a 5 year contract.

Apparently he hasn’t gotten his birthday cake yet.

I doubt we will buy him and Rodriguez in the same window. Besides we probably bought Rob Holding to cover for CB. Monreal can also cover for CB if we get Rodriguez. I would splash the cash at Mkhitaryan and a striker.

Our transfer activity seems have gone quite after the Vardy saga started!

No one really knows what arsenal is up to. Just like the vardy thing took everyone by surprise. If u have been a fan for a while, you will know we usually don’t buy anyone everyone expects.
That doesn’t imply our transfer activities have collapsed. They are usually more discreet

Dingo John
Click to flag and open «Comment Reporting» form. You can choose reporting category and send message to website administrator. Admins may or may not choose to remove the comment or block the author. And please don't worry, your report will be anonymous.

Think the only really predictable transfers we’ve had recently are Alexis and Cech, and it was very obvious they were on the move before it happened. Much less obvious right now.

With the players at their International duties it’s naturally going to slow a bit. Just remember we all got blindsided by this Vardy party, so quiet obviously doesn’t mean anything.

Arsene’s probably got his little black book out and is working on new pick-up lines.

would be our best signig in my opinion. always felt too good to be yrue though. Wenger probably settles for another younger medicore defender

That’s a lot of poo…from start to finish.
Pass the Andrex.

the pooo metre says it all is not going to happen

I would very much like Bartra from Barcelona
Striker: I still want Cavani

1 week too late :S
Dortmund already picked him up

Good passer-Likes to bring the ball out, decent dribbler- unusual attributes for a CB-check

I’ve felt for a while now that we need cover/competition for Koscielny, he plays alot of games, and fans are always nervous when he’s injured.

A guy with the physical attributes of Mertesacker with some leadership ability would be a great partnership with Koscielny.

The way he reacted when those Lazio cunts were being racist was great too, if I was in his position I would have flipped them the bird and cursed their mothers in perfect Italian

Obviously highlight reels don’t tell you anything, so if anyone on here is a Serie A/Napoli watcher I’d love to hear your thoughts.

So I REALLY REALLY hope Wenger goes for this lad.

Considering Bailly wen’t for £20m plus, and Koulibaly is better known, we better move fast for this one.

I watch SerieA and Koulibaly isnt someone you can put in a clip or something. he doesnt make mistakes. he is so dependable even midfield players look for him when things get out of hand and even that kind of dependable that Sarri’s team played a 4.3.3 without a defensive midfielder and an ultra attacking approuch, the winger didnt track back and they rarely had to worry because of this beast. and for many (me for 1) their best player was Koulibaly and not their extraordinary in form striker.
short story he is a more technically gifted Campbell

Thanks for confirming what I thought, really appreciate the insight.

It’s intringuing that Napoli didn’t use a DM

Second best in terms of goals conceded, only 12 more than a 3 man Juve defence with Chiellini, Barzagli and Bonuchi.

welcome. Im afraid if we dont buy him this summer (no matter he goes elsewhere or stays put ) he would cost a lot lot more and leave us with lots of “what if”s

Katy.
Click to flag and open «Comment Reporting» form. You can choose reporting category and send message to website administrator. Admins may or may not choose to remove the comment or block the author. And please don't worry, your report will be anonymous.

One Koulibaly and a Mario Götze please, Arsene.