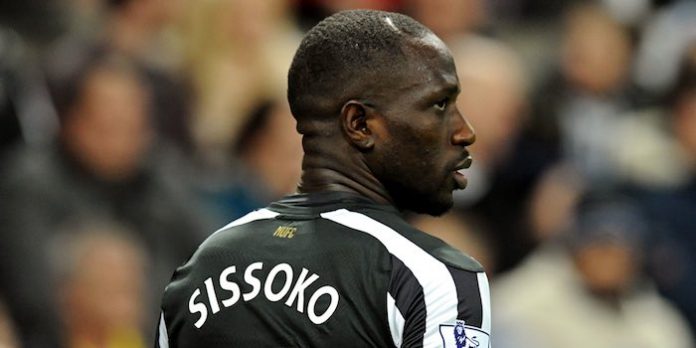 Moussa Sissoko says he’s flattered by reported interest from Arsenal as he confirmed his desire to leave Newcastle.

The Magpies were relegated from the Premier League last season, despite a final day annihilation of Sp*rs, and the midfielder told Foot Mercato that he wants to stay in the Premier League, fearing his international chances will be affected by playing in the Championship.

He’s a player that has been linked with Arsenal in the past, and when it was put to him that North London might be a potential destination, he seemed keen on the idea.

“It is very flattering,” he said. “Arsenal is one of the best European teams. To be watched by that sort of club, that proves that you are a quality player. It is good to know. I hope that I will have the chance, soon, to play for this club or for a similar club…

“It is a very big European club. I think that very few people would refuse to play for this club.

“Everyone knows, I often said it when I was young, Arsenal is the club of my heart, because there were quite a few French players there like Thierry Henry, Robert Pirès, Sylvain Wiltord, Patrick Vieira who was my idol.

“The beautiful Arsenal. We will see. I cannot tell you if I am going to go to Arsenal. For the moment, I am focused on the French national team and the Euros.

“I have advisors who are dealing with all of that and I hope that things will go well with as little difficulty as possible for me to find another club.”

It’d be a big surprise if Arsene Wenger still had his eye on Sissoko, so we’re giving this one a sloppy 8.

Dude arsene is not interested, quit the flirting, it’s not working for you.

Alex is a Goon

So is it a stinkyssoko?

would you take him though for less than 10 mil? He can play all across the midfield and would fill one of those squad positions vacated by Rosicky Arteta and Flam.

Thumb up for ‘i suppose i would yeah’
or
down for ‘nah not really’.

John C
Reply to  Per Flirtesacker

Wouldn’t touch him with a barge pole

Harsh
Reply to  Per Flirtesacker

i don’t think he is gonna go for 10 million.

we are overstocked with central and attacking midfielders.

Vardy with whiskey, Szczesny with cigar
Reply to  Jamie Vardinho

With Flamini, Arteta and Rosicky gone?

Jack Lewis
Reply to  Per Flirtesacker

I’m flattered when my mates suggest a beautiful barmaid is interested in me too, but everyone knows it’s going nowhere. Doesn’t mean I won’t mention it if someone asks though.

These “mates” how many drinks you buy them for them to say that?

I too dream about playing for Arsenal. Sadly it doesn’t mean it will happen

Vardy with whiskey, Szczesny with cigar
Reply to  ut

You’re not in french national team though.

RJgooner
Reply to  Vardy with whiskey, Szczesny with cigar

is he the new Solomon Kalou?

Pretty sure he’s very interested in Arsenal and the feeling is not mutual. At what point does it become harassment/stalking?

8 on the poo-metre? That can’t be. This guy is French and will be cheap. And will still need 2 or one more for the departing Arteta, Rosicky and Flamini! So don’t the poo-metre this high.

Wasn’t all that flattered with his performances last season!

Players seem to be using us to get good deals, the club should just come out and say “No! We aren’t interested in you” , sometimes

8 on the poo-metre? That can’t be. This guy is French and will be cheap. And we still need 2 or one more body for the departing Arteta, Rosicky and Flamini! So don’t run the poo-metre this high.

I’d rather any remaining midfield roles be filled by Toral, Zel, Iwobi etc. Plenty of options already with Granit, Mesut Wilshere Ramsey Coq Santi and Eleney in the center. Focus should be on CB and Striker.

Except Ramsey, Wilshere, Coq and Santi spent most of last season out injured. Happens every year the annual Arsenal Player Maiming. So, the more the merrier I say. Remember how our title challenge stuttered when Flamsey took over in midfield? That was the beginning of the end of our title challenge.

My NUFC friend next to me at work says “you can have him, he has delusions of grandeur, thinks he is far better than he is”

has the wiff of Bentner to me

The wiff od Debouchy to me…

Fuck that for a game of soldiers!

Don’t call us, we’ll call you.

He is the kind of last minute 11th hour signing that Wenger may make. For now we have to bring in quality players who are far superior than Sissoko (am looking at you, Mahrez)…..

I’d be pretty pissed off if we got him. He’s not even the best midfielder in a relegated team.

It’s a bit like being on a night out and the ‘big’ girl on the resident hen do making constant eye contact and smiling with you.

We’ll try to ignore it to avoid the awkwardness.

Quite like the guy. Would be tempted if Joel Campbell wanted away

And swap a defensive central midfielder for a wide player? How does that help?

Strikes me as one of those who has too much natural ability and no hunger or work rate. Powerful player but when the chips are down as they often are at times with us he doesn’t seem the type to roll up his sleeves. Sing when your winning mentality I think with this one, pass

I’m NUFC fan, please take him!! He’s the kind of player who will have one game where you’re like wow this guy is top class and then disappears for 6 or games.
In all honesty you can do a lot better than Sissoko. Remember when you signed Debuchy from us? He was similar class of player to Sissoko who looked good in a poor Newcastle team but was found wanting at your level.
He’d be nothing more than a squad player for you.

as an Arsenal Fan, it is my right to know what an NUFC fan is doing on Arseblog?? I’m seriously confused….

Please buy him, he’s a fab player, honestly, and only £12m….We can even arrange delivery.

I’ll drive him there for you. 1 good game in 10. Reputation runs off his highlights reel. Hes got no backbone at all and for a big lad ges soft as the brown stuff you mention. Newcastle got relegated for a reason… Players like him.

Why the hell is this news? – paraphrased Mencia.

would anyone be sad if we sold Ramsy for 30+£ and brought Sissoko for 10? please use the fucking thumbs below to express your opinion.

What a modest fellow

Could be a decent squad player with his utility of playing in any midfield position, And he is a big lad whom could provide some added steel to the midfield when need be. And he is still only 26 yrs old.

If we could sign him relatively cheap I would not be against it.

Vardy with whiskey, Szczesny with cigar
Reply to  Martin Finley

Better than Ox, Ramsey and Chambers in central midfield.

Ben
Reply to  Vardy with whiskey, Szczesny with cigar

Really don’t get the hate for Ramsey. Had one season where he wasn’t quite at the races and we’re slating him like he’s a championship midfielder.

Ramsey is better than Cissoko on the wing or behind the center forward. In center midfield Cissoko is better.

The only place Sissoko may be better is in driving the bus.

I would buy him without question. In some regards, he reminds me of Miller who can run for days and work in all areas of the midfield, or up front. Sissoko can be quite useful to Arsenal. Wenger can do much worst than buy a player of his ability.

Sorry I meant James Milner — not Miller… I like Milner a lot, and I also like Sissoko. They are better than you think they are.

Even if we were going to pick from the bones of this terrible Newcastle squad I would have thought Perez or Wijnaldum the more likely targets?

Loan with option to buy. We need squad players.

I really like sissoko. He has a lot of talent and physically he’s a beast. I think I’d he went to Aigner team he would do well.
And I think he really has a great attitude, would fit in with us.
Who knows, but he wouldn’t be too expensive either..

Went to a bigger team*

People are acting like he’s the worst player on the planet. I’m not saying break the bank for him but at 10 mil would be a great addition to our bench. To be fair on his day he can be unplayable but no way would he start for us though. He’d need to understand that.

Remember he’s very versatile. He could pretty much play anywhere bar cb any when goalkeeper.

off topic: sorry to hear about that mugging James from Arsecast, feckin bastards.

Decent player. Let’s have a big squad for a season or 2 and detach ourselves from those offering least contribution after that.

Sign him and see if our current midfield are good enough to keep him out.

city are negotiating for aubemayang as sky sources understand. they are gonna play him on the wings.we are waiting on vardy. man i am pissed right now. 50 mil and we could have gotten him.

Unless we can buy Pogba for 35m + 1 quid, Granit is a fantastic signing.

Coquelin is also an excellent player whom I hope will make the French team in the coming world cup two years down.

He was MOTM, IMO, for the Euro final, despite the loss. He completely bossed from defensive midfield to attacking midfield and made Pogba all but disappear. Wenger is just the sort of manager to get the best out of his fellow Frenchman. Almost everything exciting from France in the final had his stamp on it.