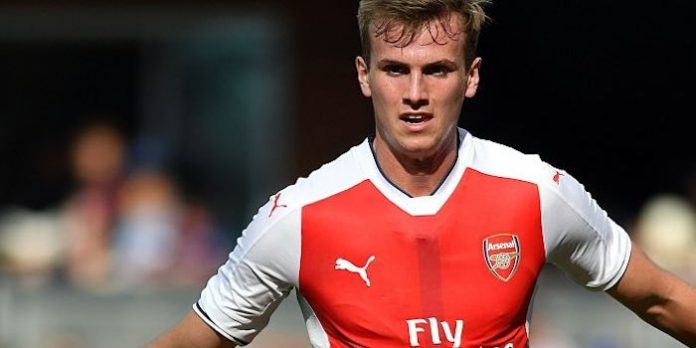 Arsene Wenger was impressed with his two new signings as Granit Xhaka and Rob Holding made their first appearances for the club.

The 20 year old defender was the only player to play the full 90 minutes of last night’s 2-1 win over MLS Allstars, and his assured performance was warmly welcomed by the Arsenal boss.

“He has adapted surprisingly in a very good way,” he said.

“He reads the game well and understands what’s going on. He anticipates well and that’s a quality, at such a young age, that you don’t find a lot.”

The Swiss international was a second half substitute, showing an impressive range of passing.

“He did adjust very well,” said Wenger. “His passing was clean and technically he did well. Overall I believe his first game was encouraging.”

On the game overall, the Arsenal manager was pleased with the performance of his team after some tough training in the California heat.

“I believe it was tough for us,” he said. “We are in a very hard training programme at the moment.

“You never know how tired the players are going to be in the game. So it was good to see we are in good shape. We had two hard days in the training sessions before we played today so we did well.”

Positive thing for Arsenal. Bodes well for the team.
Now with Mahrez and Mustafi we are all set to rock n roll.

Still need that striker though… I did hear a rumour suggesting that Arsene is potentially interested in trying Sanchez up top instead of out wide, so if we get the wide player that’s what he will do. So it will be an either or sort of situation, and use Alexis as the ‘in case of no striker break glass’ option.

I can give it some credence considering that Alexis was fully open to leaving in the summer, so maybe Arsene said stick around, I’ll give you a bash up top.. or words to that effect.

I thought Willock Adelaide Akpom Zelalem and Iwobi all looked really good. Bounced off each other well and played with boatloads of confidence. I have doubts about Willock and Akpom making it here in the long run but in the past few seasons our youngsters have looked more promising than in wilshere’s generation in my opinion.

How many of them do you have in first team? Iwobi only and perhaps Barcenal boy Bellerin? Compared to Wilshere and Gibbs and also Ramsey (if you count Bellerin as part of the NextGen), it is not necessarily a better generation.

Akpom, maybe, but I thoroughly diasagree with you on Willock. He’s an accomplished dribbler, dogged runner and intelligent on the ball.

Please dun call him Adelaide
Call him The Jeff™

I thought our centre backs looked great, unlucky on the bounces for the Drogba goal. Doesn’t he just always score on Arsenal…

Xhaka’s over the top passes are exciting. Rob Holding performance was encouraging but Chambers deserves a shout too! Chambers played with confidence.

Theo still does not convinvces me he’s a striker (or a winger) and think he should be sold.

I agree about Chambers…..i think we (myself included) sometimes are guilty of forgeting what a prospect he is, probably because of that one stinker he had against whatsthename. When we bought him, young as he was (19?), he was already an established premier league first team centre half,even was ahead of John Stones back then in England’s squad pecking order, so the potential was, and is still there. we just need to nurture it carefully, and i think that’s what Arsene is trying to do

It’s never good to read much into these friendlies, but I thought Xhaka did relatively well. His long range passing is great to watch, and it’s interesting that both him and Elneny like to take long-range shots.

This would provide us with another ammunition for sure.

Don’t worry, Arsenal’s analytic team will knock those long range shots out of their game in no-time

That answers my question as to where Arteta’s long range shots of everton vanished to the moment he signed for Arsenal.

I remember in Arteta’s early years at Arsenal (not sure if it was his first or second season?) but he scored 2 or 3 screamers over a one month period. Left me thinking, fantastic we’ve got our own Roberto Carlos at last – a long-range threat to pull defenders away from stacking the area…

And then he never did it again!

Artera of Everton was different to arteta of Arsenal man.

In the back and forth that goes on about shots from distance, while it is true we don’t take them often and it is also true that they are largely ineffective, having a few players who will take shots from distance from time to time will actually help overall, because defending teams will have to be somewhat aware of that, therefore possibly opening up the back line enough for us to do what we really enjoy, which is walking the ball into the net (that was a long sentence and I apologize). Essentially, having variety in attack is always good,… Read more »

An enjoyable game to watch. Don’t know if blogs is planning on doing player ratings for a friendly but here’s my opinion: Cech: Some good stops. Solid. Looked like a ninja in his new goalie strip. 7.5 Debuchy: Is he actually a professional footballer? 5 Holding: I don’t want to hype the kid up / get ahead of myself here, but I’m 99% sure we’ve got the next Beckenbauer on our hands. Great debut. 8.5 Bielik: looked decent until giving the ball away for the goal: 6.5 Gibbs: Looked pretty sharp. Hope he stays and challenges for that LB spot.… Read more »

Xhaka and Holding did well, but Mahrez and Lacazette were completely invisible the whole match. Hope they turn it around.

And Giroud, that’s the second match in a row without a goal.

I found the performance relatively encouraging- considering we are still finding fitness and playing with a makeshift side against a team of players who are in the middle of their season and at peak conditioning.

There
Reply to  badaab

Let’s not forget that almost all the A Stars are in the twilight of their careers, so there had to be a difference between AFC and their work rate

Andy Mack
Reply to  There

But they did only play 45 mins.

i did not watch the match but it soothes me when i read about our new signing’s performance. Holdingxhakaboooom

Xhaka was immense when he came on, looked like he was playing for us for years, can’t wait to see him play with likes of Sanchez and ozil

I didn’t watch the match either, but I thought they were all excellent.

I didn’t need to watch the match to know Theo will never make it as a striker.

Both Theo and the Ox looked lost as usual. Theo has the touch of a crash dummy and the Ox gives the ball away repeatedly and has no clue in the final third. If we go into the season with these two as our main winger and forward options (aside from Giroud and Alexis), kiss the 4th place trophy bye bye.

While i agree with you on Theo, I disagree totally on the Ox. did you watch both matches? I don’t know which pre seasons you’ve been watching, but if it’s the same ones, then for me, the Ox has been one of our best players so far, and i will suspect by the amount of thumb downs you got, compared to thumbs up, that the majority here disagree with you (on Ox, because i think we are all agreed on Theo!)…….Ox scored a glorious goal against Lens, and in both matches, every time he got the ball, he looked dangerous!….he… Read more »

Theo should stay in the US and play there.

What s the point of giving him and De-douche game time. Neither have a future with the club… So why waste precious preseason game time on them.

I can’t wait for the start of the new season. The exciting prospect of watching a bunch of average players plod their way through to a possible fourth place is excruciating. And it’s great to see that Theo is still with us. Even though Wenger and everybody else on the planet now knows that Walcott will never be anything but average, it’s nice to know that he’ll be picking up his totally unearned 150k every week. I guess nobody else wanted “the new Thierry Henry.” I’m just stunned that we haven’t signed a world-class striker: it’s not like Le Prof… Read more »

How can you call all of our players “average”?? For goodness sake Fats!
You should continue to follow cricket and not The Arsenal.

Fats you have really pissed me off this time when you say:
“The exciting prospect of watching a bunch of average players plod their way through to a possible fourth place”
Is Ozil average?
Is Cech average?
Is Alexis average?
Is Jack average?
Is Aaron average?
Is Santi average?
Is Xhaka average?
Is Hector average?
..and many more….COYG!

Bet you they won’t win the title!

So every single player and team who won’t win the title is average? OK

You are either a troll or a spoilt kid.

A good performance from the team I thought.
Yes Theo is lacking and Ox needs to do lots of passing practice…but COYG!

I’ve just realised all the fun to be had with Holding and Coq.
Nice one Arsene.

Mahrez to go? To Arsenal? Please?

The missing link is a striker spearheading this awesome squad . I love Giroud so we need a mobile striker to offer options.
Lacazette, iCardi ou Jesé fit the bill. Having watched Lacazette the last 6 months he is my favourite. 24 goals in 34 games is pretty decent.

N.B: Holding is sheer class! Hope he keep it up.

Why do we always look outside for what we have inside. If Sanchez puts on top, we have plenty of players to play the wide area. We have Chuba waiting in the wings for his chance. Hector took his chance, who is to say Chuba wouldn’t. Mahrez had one good season and beside most of I bet have never heard of him before Leicester city bought him. Our youth ranks are bursting with talent ready to be unleashed. I can’t wait for the season. Exciting players we have. Watch Chubas movement for the goal yesterday and throughout the match. In… Read more »

Arsenal Transfer Daily
Ivan Gazidis to Robbie
“We’re not stupid we know what we need to do and we’re getting it done”
Answering a question from Robbie about transfers afta the Mls game in San Jose.
Better not be more rubbish from Ivan the terrible interviewee!!

Can someone please tell me why Cazorla hasnt been playing ?