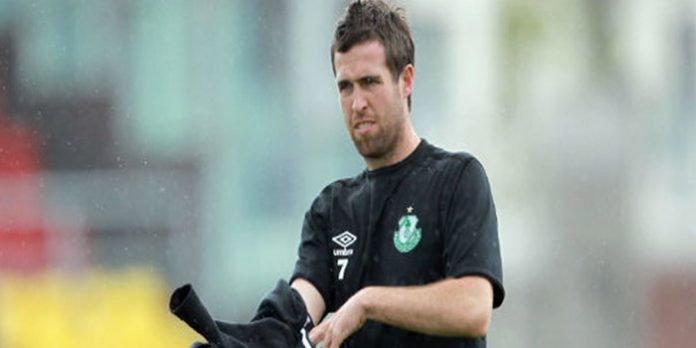 Arsenal’s chief scout for Ireland, Stephen Bradley, has been given Arsene Wenger’s blessing to take up a caretaker manager role with Shamrock Rovers.

The 31 year old has been asked to step into the breach following Rovers sacking of Pat Fenlon, although he can only carry out the role for 60 days as he hasn’t yet got his UEFA Pro Licence.

Bradley will continue his scouting work at the same time, having spoken to Wenger and Steve Rowley, Arsenal’s Chief Scout.

“I spoke to Arsenal, I spoke to the boss, and he’s given me permission to do it until the end of the season,” he said.

“He’s happy. He told me I must take it as it’s great experience. He said, ‘Go with your gut, and with what you feel’.

“The boss, as I call him, and Steve Rowley, who is the chief scout, gave me permission to go and do it.”

Bradley was a highly rated young talent as a player, and signed for Arsenal in 2004 after Liam Brady played a part in bringing him from Dublin to London. However, he never made the grade at the Gunners, and played most of his football in Scotland and the League of Ireland.

Arsenal do have a rich history of Irish players, with the likes of Liam Brady, David O’Leary, John Devine, Pat Rice, Sammy Nelson and Pat Jennings representing from both sides of the border.

However, in recent years the pickings have been slim. The last Irishman to play a first team game for the club was Conor Henderson, who played 90 minutes in a 5-0 FA Cup win over Leyton Orient in March 2011.

There might have been one more recently, but David O’Spina opted to play for Colombia rather the country of his father, Seamus.

Hi, if you are going to comment, please use English.

Nice, a language nobody will understand

he sits in the corner of pubs here in Dublin, waiting for someone to mention Arsenal, so that he can tell the room that he has the record number of appearances

Can you direct me to some of those pubs?

we still have Mesut Ö’zil with some mixed heritage, but there’s definitely some Irish in there…

why did we have a scout in ireland in the first place? never found anyone from there :S

I hope you’re joking, if we find a player with half the talent of Liam Brady I’d be happy.

So we can get potatoes for the players.*

*Meant as a joke. Please don’t kill me with dislikes.

Sorry, am I the first to mention the great Eddie McGoldrick!?! The man who Bobby Pires once said “his hair makes mine look like a Mitchell brother”.

Wenger did not require he does the scout job full time? Surprised, probably because he is no Arsenal legend.

Thought we would get another Irishman in Mickey Taryan before he opted for Man Utd.