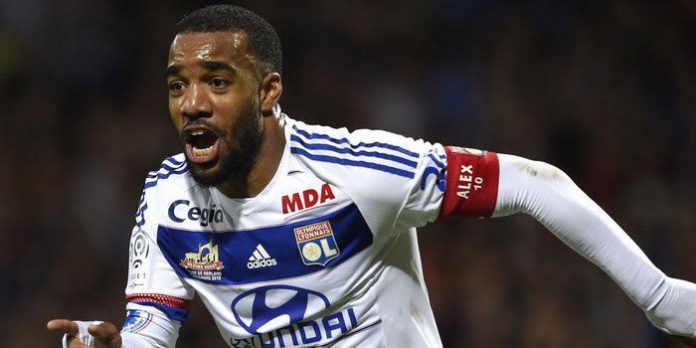 Quite how much interest Arsenal actually have in Alexandre Lacazette is anyone’s guess.

He’s a decent French striker, so it’s probably fair to say we’ve done our homework on him, but whether or not he’s the man Arsene Wenger wants to lead the line next season is the question.

And that question appears to have been answered by Lyon’s President Jean Michel Aulas who told Canal+, “We have had a few calls, but Alexandre will stay. I think it is his desire and the coach [Bruno Genesio] counts on him.”

Now, Presidents say a lot of things that don’t always come to pass, but he probably does have some insight into this particular situation.

Are our sights set elsewhere? Probably, even with the announcement that we’ve signed Japan international Takuma Asano – a player who is most definitely one for the future, and not the answer to our striking problems just yet.

I have a feeling that Wenger is not very keen on him. Had he been really interested he would have snapped him up last season when everyone knew we needed a striker.

He must have a plan. Or at least I hope so.

Could improve as he reaches his peak years but is he really the answer? We need a clinixal first-choice striker woth Giroud as a solid bench weapon and rotation option, but Giroud’s starting for France ahead of him and the chubbier and significantly less talented version of Giroud that is Andre Pierre Gignac appears to be the main sub option from the French bench.

Yeah, but we’re not getting anyone to flatout replace him, I don’t see anyone on the market like that. Lacazette could however offer something different and could have potential. The hype around Lacazette and thuis his price also seem to have dropped, so I think he’d be a good punt. Then again, if there is someone who can judge a striker’s potential, it’s Arsene Wenger and I’m not sure how keen he is.

I feel like his pecking order in the France set up has more to do wuthering fact that he is a stroker in the same mold as griezmann and martial. Whereas Giraud is the only real target man so deschamps elected to bolster his options with another big guy instead of having three quick forwards and only one real hold up player. Perhaps of he played for a bigger club he would get in ahead of martial but who can really say .

In other news we have just signed an unknown 21 year old striker from Japan!

What’s the scene with Chicarito? Not a top top striker but needs must.

He now lools like a transvestite lol Google him!!

He looks like a cross between Decland Donnnely, a hedgehog with maybe a tiny bit of young Michael Jackson in there

Chicharito is like the antithesis of an Arsenal striker. He’s purely a poacher, and doesn’t contribute anything on the build-up. He’s really not great in anything but a counter-attacking team; but then again, you could say the same of Vardy, and we almost signed him.

What we need is a poacher to win those matches where the team does not turn up.

Aulas is as tough a negotiator as any in world football. Possibly only us, Seville and maybe (dare i say it?) Spurs get as good a value on sales.

Common guys, we don’t need a striker. We have Giroud, who has Ben great in Euro, then there is Walcott and Welbeck. Walcott is wc player, he just didn’t turn up last season and welbz was injured.
And moreover there is no striker available. Lacazette is no improvement, hinguain is overpriced and so is auba, morata, lukaku, icardi.
As they say money bank is better than two on field. So we should wait another year or two for right striker to be available.

Are you fucking serious????

Or, are you seriously fucked??

Or fucked down jokingly

We need a reliable striker even Arsene knows that, hence the Vardy disaster. I think Vardy would only have been support for Giroud rather than someone better, so we keep looking.

A lot of could and should, I think its 79 players, the so called in the know don’t know. It is all attempted hype for no other reason than to wind up fans. In actual fact, only about half a dozen forwards are suitable for Arsenal, 2 of which are stupid money and only Man U are that stupid. The rest are happy where they are and have no gain in coming to this country, others who are any good are still on secure contracts and wont be coming. Arsenals only hope is not money but persuasion or a well… Read more »

As Arsenal fans, what signings do we think the squad needs?

Striker, centre back and maybe a left back?

I hate the coverage and rumours in silly season, it seems to unsettle even the most rational of fans.

Giroud and Benzema had a son together and he is now called Gignac.

If we were willing to drop 20 mil on a 29 yr old striker of questionable character, why not bring in 30 y/o Mario Gomez. Underrated imo, having a good euro and his reverse pass to set up the goal for Özil yesterday was class. Definitely one for the present and would jump at the chance to come in from the cold that is the Turkish Lig and have another shot at the big leagues.

If no strikers are available it will be interesting to see if Wenger will buy a striker he doesn’t want just to shut us up?

I wanted to see Koulibaly come in but apparently Chelsea already done that deal. As for the striker situation Why don’t we just go big after Lewendoski!

Can’t we execute our buy back clause on Park?

We seem to be finding out who we will be signing by process of elimination. It’s not Batshuayi, it’s not Lacazette, it’s not Ibrahimovic and it’s not Vardy. Nor Vincent Janssen or (probably) Mauro Icardi since nobody would got to Spurs over us, particularly when they already have Kane. It probably won’t be Aubameyang since a) city were rumoured to have agreed something although that has gone quiet and b) Dortmund have already lost 3 players and he has a contract until 2020 or something. It doesn’t really look like we’ve ever been in for any of these. So who… Read more »

Just out of curiosity, why do we need a traditional no. 9? Atletico has had a couple great seasons with an aging Fernando Torres. Chile just won the Copa with Vargas. The Euros are about to be won by a team with either Mario Gomez or Giroud (all apologies to Iceland, Wales, and Portugal). The keys is that each of those sides has (1) a front four that work well together and (2) Griezmann, Alexis, Mueller, and Griezmann (again) making up the difference. I just want more goals. I’m not particularly upset if Giroud and Ozil set them up and… Read more »

Trez
Reply to  Daniella No. 9

Because we have piss poor finishers in our team. Atletico have Griezmann who has scored over 40 goals in the league alone for the past 2 seasons. Who in Arsenal can get more than 20 in the league?? Certainly not Giroud. When last have we had a player who has scored 20 in the league? 2012. RVP. It’s been 4 years.
We need a mobile striker to get the best out of Ozil. Our best goal scorer Alexia struggles to score when he plays alongside Giroud.
We need a goal scorer. Even Wenger knows this.

RVP is available, can we forgive? He’d be a great 33yo back up to world-class ??? or just have another 20-goal season for fun. And it would piss off Jose AND THE SCUM.
PS: Arsene won’t buy or announce until after the Euros.

Anonymarse
Reply to  Daniella No. 9

Happy to see a change is system provided it works, but at the moment we only have Alexis who seems capable of scoring 20+ and nobody else is really scoring anything at all.

We certainly need something.

Daniella No. 9
Reply to  Anonymarse

I absolutely agree. Just saying why does that something/someone have to be a “world class no. 9” (Benzema, Higuain, Cavani, etc.) who we almost certainly won’t be able to sign? Can think of a lot of tricky, pacy, excellent finishers who play on the wings and are available — see, e.g., Mahrez (who has a release clause and unlike Vardy has now had two consecutive excellent PL seasons). Not saying we should buy him. But him, Insigne, Draxler, Payet, Lucas Moura, Mo Salah, (and possibly Reus as well as others that I am forgetting at the moment) are all more… Read more »

Bosscielny
Reply to  Daniella No. 9

Because there is a difference between playing knockout tournament and league.

Does anyone think RVP could come back and do the job. He knows our system, if we can hold it off with him for 1 year maybe the potential for a prominent striker to move for cheaper might b available? I understand the hatred some people have for him, but I think under wenger he could have a pretty good season

What, so Welbeck has some company in the treatment room?

RVP wouldn’t care, that’s the problem. He left us to win a championship with one of our rivals. He got what he wanted, I doubt he would come back and actually want to care to help us win it.

I’m not going to panic until AW starts talking up theo Walcott circa early August, at which point we will know we’re fucked