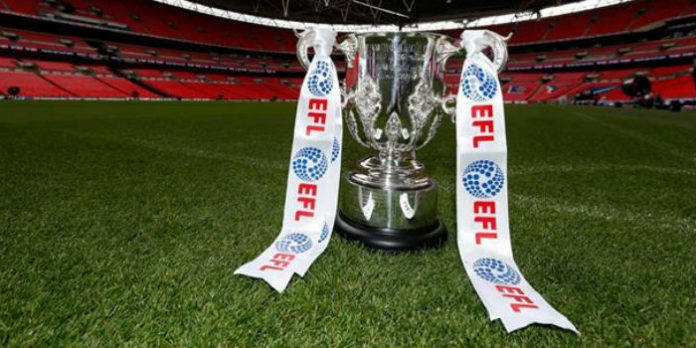 Arsenal will play Nottingham Forest in the third round of the League Cup.

The competition, now known as the EFL Cup, remains the only domestic trophy to elude Arsene Wenger, in part because we’ve always used it as an excuse to blood youngsters and give minutes to fringe players.

No doubt the likes of Chuba Akpom, The Jeff, Krystian Bielik and Chris Willock will hope to get game time as they look to build on their pre-season integration into the first team.

The match will take place in the week commencing September 19, and may feature a reunion with Arsenal old boy Henri Lansbury.

Well that made me laugh

My mind’s eye curses you

Well who the hell are we going to play at CB? The kids? Ha! They’re our starters.

No we’ve realised we need experience at the back even for EFL games. We’ve learned our lesson after previous years……so Bould and Wenger will step in. Solid.

Can’t see the wood for the trees.

Always liked Lansbury and wish he had more appearances for the club.

However I’m also happy to see that he established himself as a professional player. He may not have been at the level needed for Arsenal, but he is still a solid player.

Scored against Spurs. Good enough for me.

yep me too, he always played a good Mrs Marple

Does Bryan Roy still play for them?

At home or away ?

We should buy Oliver Burke off of them, he is going to be good. Is actually pretty good right now, I hope he doesn’t score against us.

Oh yeah!! Exciting young player! Looks very promising and would be a great youth player to have on the books. Arsenal should buy him then loan him with Forest til the end of the season.

I watched their game against Sheffield Wednesday and Lansbury looked like the Commander-in-chief.

I liked lansbury. Hope he doesn’t do to well this time tho.

It would be interesting to see what kind of team Wenger puts out! A mix between youth and experience or just the youth to see what they can do.

Don’t be silly. The youth will get hammered, Forest are a Championship side, not conference league.

Ahht his is good – the club that charitably gave us enough shirts so we could turn out as a team way back when we were Dial Square FC.

And that’s why we play in Red today.

Goonertilidie
Reply to  Bring Back Seaman

Does Archie Gemmill still play for them? He was quality.

Also Shilton always plays well against us. Let’s hope he has a bad game this time round.

the only sam is nelson
Reply to  Vaseline Gang

Shilton got a merciless roasting from the North Bank when Forest played at Highbury the week after his marital indiscretions had been plastered all over the tabloids… now of course everybody would be tweeting abuse rather than shouting it, but that’s the onward march of progress, mumble mumble bah

Vaseline Gang
Reply to  the only sam is nelson

Yes i recall taking the mick out of him after an indiscretion with “Shelia” I think? There is no humour in the stands any more….

“Forest’s charitable approach to the sport helped teams like Liverpool, Arsenal and Brighton & Hove Albion to come into existence. In 1886, Forest donated a set of football kits to help Arsenal establish themselves – the North London team still wear red.”

From Arsenal.com: In 1886, before the Club became professional, a small group of Nottingham Forest players, Fred Beardsley, Bill Parr and Charlie Bates, joined Dial Square FC, (the Club’s first name) and brought their old red kit along with them. Working to a tight budget, the Club decided the most inexpensive way of acquiring a strip was to kit out the team in the same colour as the ex-Forest players. This original kit comprised a dark red shirt with long sleeves, a collar and three buttons down the front. The shirt was worn with white knee length shorts and heavy… Read more »

“The competition, now known as the EFL Cup, remains the only domestic trophy to elude Arsene Wenger, in part because we’ve always used it as an excuse to blood youngsters and give minutes to fringe players.”

And because we put in a turd of a performance against Birmingham City. That still makes me sick.

Forest under clough wow what a team, would love to see them back in the prem

the only sam is nelson
Reply to  JOHN

two European Cups (back when it was contested by actual champions) certainly pisses all over Leicester’s chips, that’s for sure. And didn’t they win the league immediately after coming up from teh second division as well?