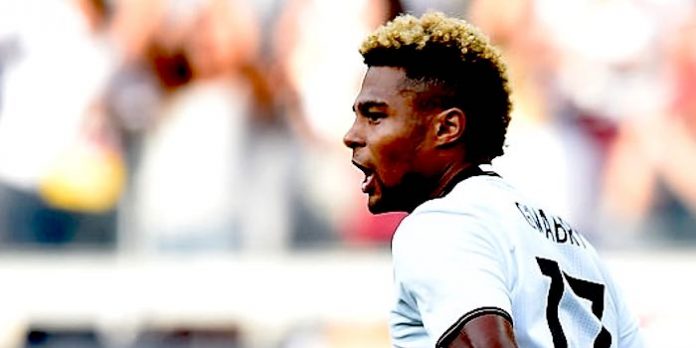 Serge Gnabry’s fine form at the Rio Olympics continued as he got two more goals for Germany last night.

Admittedly it was against inferior opposition as the Germans gave Fiji a 10-0 tonking, but it brings his tally for the tournament so far to five. He scored in the opening game against Mexico, and bagged a brace against South Korea in the previous game.

Young German Serge Gnabry is on fire at the #RIO2016 games

His second game from a free kick:

Germany have qualified for the next stage of the competition, leapfrogging Mexico who were beaten by South Korea.

Meanwhile Takuma Asano played for just over an hour of Japan’s 1-0 win over Sweden, a result which wasn’t enough for them to qualify for the knock-out stages.

The 21 year old’s club future remains to be sorted with Arsenal trying to bring him to England on an exceptional talent visa, but the likelihood is that he’ll spend a season out on loan, by which time he’ll have enough international caps to qualify him automatically and allow him to play in the Premier League.

Gnabry has got to be worth an opportunity at some point doesn’t he?

Ahead of The Jeff in my eyes. Personally keep Serge and loan The Jeff out to the Championship or a suitable taker.

A loan at a decent club with similar play style to ours and regular time will do him wonders.

We dont need noooo strikerrr….
*reads in The Wall voice*

I remember a goal he scored against Swansea (or Cardiff) where he took a touch with his right foot to kill the ball, and then drilled it bottom left passed the keeper. I thought that was the beginning of his breakthrough.

Hopefully if we can put a solid run of form together we can blood a few of the close-but-not-quite-there yet youngsters. Those that seize the chance become this seasons Le Coq/Bellerin/Iwobi. There are gaps to make contributions like Gnabry is capable of.

Of the current crop the closest to that breakthrough moment is probably Bielik, Holding, Akpom, The Jeff, Willock, Zelalem, Gnabry, Ainsley Maitland-Niles (where is he? Outstanding prospect).

Somehow at Westbrom the gaffer though this guy is not worth a try!

He probably wanted to pass the ball. They don’t do that over there.

So did the gaffer at Arsenal.

I think we should try and find him a premier league loan where he could get more game time……I know the west brom load didn’t work out but I think that was more down to his injury and their playing style…..Swans, Southhampon and even West Ham could be good options.

Sod the loan, get him involved. I’d rather him playing than Walcott or Ox at this point. Would he need to be named in the Prem squad or can he just flit in and out due to age? Can’t remember the rules, whether it’s 23 or 21.

It’s U21, and he still counts as being in that bracket so all good on that front.

So because he scored two goals against Fiji’s U23 in a 10 – 0 match, you think he is better than Walcott and Ox? I guess Wenger is useless for not seeing this..

Any player is better when they not playing for Arsenal!

Not at all, because in the three months or so he was in the first team a few years back he showed more desire and commitment than Theo has in the majority of his 10 years and arguably more than Ox too. And he’s certainly not short of talent or skill, that much is clear. Still got patience for Walcott? I certainly haven’t. I’m not suggesting throw him straight into the XI nor even the squad, but I’d rather he stuck around, played U21s and had the odd first team run out here or there. Last season’s loan didn’t work… Read more »

If we keep him in the squad I fear he woun’t get enough minutes to consider staying at Arsenal. He is skillfull, but I doubt he is better than Walcott and Ox. I trust Wenger on these things, given he sees them every day, every week.

Weirdly even though he’s german I think he qualifies as home grown, and as he’s under 23 I think he doesn’t have to be included in the submitted squad for the season. Like youth players don’t have to be for champions league etc ?

Given the form of Our wingers this pre-season and having experienced Wenger’s permutations when faced with such unfoldings, I really find the Mahrez rumours hard to believe.

Yeah, I didn’t really notice at first, but the position of the wall and the keeper are both pretty terrible… Move the wall to the right and the keeper to the left just a bit and it would be covered. Oh well, can’t fault the strike, that’s for sure. Sometimes you just have to put it on target!

He’s always had the talent and it really bothers me on a deep level that he went through with that loan-deal to West Brom last season. Like who would voluntarily train under Pulis? That man really destroyed his season. I’m just happy he didn’t kill his confidence.

Giving Gnabry time and believing in him is the best thing we could do now. If we do just that then it wouldn’t surprise me if he powered past a lot of our attacking midfielders by the end of the season.

goonerink
Reply to  Someone's something

did anyone see gnabry last season?
Pulis was right, he was fat and lazy after a season out injured.
the unused loan to west brom did him wonders for his commitment and attitude.
took him down a peg, and now he is tossing pegs like khybers!

As much as I hate Pulis I think you’re right.
Seems like after his injury he let himself go a bit. As much as Pulis is a horrible individual, his teams fully understand the work ethic and necessary requirements to compete in matches – and even in training to challenge for a place.
Hopefully he can come back from the Olympics and show how determined he is to challenge for a place in our starting XI against the likes of the Ox, Theo and even Campbell.
Fingers crossed!

Who’s the coach of the German Olympic again?

‘The Man they call The Monster’

As aforementioned, he needs a loan to a team like Swansea or Saints, La Liga even.

I don’t see the point of him in the Arsenal squad, we’re overstocked in wingers, renew his contract send him on loan to a good squad, he needs experience.