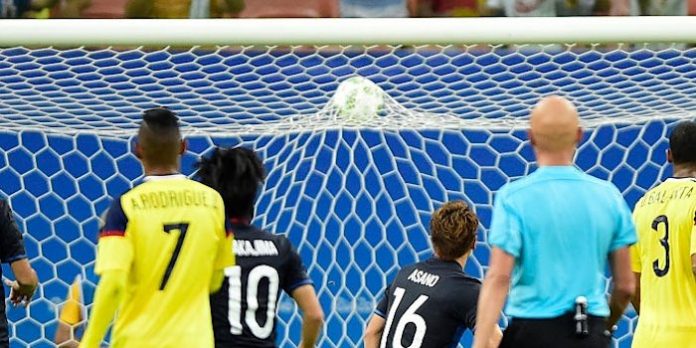 Arsenal new boy Takuma Asano scored his second goal in as many games at the Olympics, helping to spark a Japan comeback against Colombia last night.

Finding themselves 2-0 down, the 21 year old Gunner cracked home a blistering shot to get one back, before a Shoya Nakajima screamer made it 2-2.

It follows his strike in Japan’s opening game, a 5-4 loss to Nigeria.

It’s been a good Olympics for him and Serge Gnabry who scored twice for Germany, sparking praise from his manager.

“You can see now what an important player he can be and at what level he can play at,” said Horst Hrubesch. “He showed that to everyone and hopefully he will now get the opportunities at his club to play in that position.

“Over the last two years he wasn’t always fully fit. What annoys me is that people at his club have never given him enough trust during that time.”

Do we know if he has got a work permit or is likely to get one?

Can’t one of the London Unis let him on their books so he can get a student visa? That’s probably easier, right? I literally have no idea how visas work in the UK, but I know getting work visas for UK citizens is easy enough in Japan, can’t we repay the favour?

Interesting point. Anyone know the answer to this?

I imagine he would have to be on a course, but maybe he can enroll in a uni like Berbick to learn English language and get him round based on that.

I imagine it’s far from that easy.

Theoretically its possible but the case would get way too much media attention & there’s no way the immigration authorities want to set such a precedent.

Student and/or Cultural Visas won’t work, as they don’t allow their holders to work during their stay. I’m sure if Gazidis really wanted to, he could have Arsenal pay Asano off the books. But that’s be financially one step too daring for Gazidis, as we well know.

Have you guys been paying attention at all? The people of the UK have voted pretty clearly for tighter controls on immigration.

Also I think and hope that you are probably right that running the business illegally is not something Ivan and team will want to do.

Glad someone said this – Britain has never been a welcome country for immigration, despite UK passport holders having visa-free access to more countries globally than nearly every other national passport.

And maybe as a result, more Brits live outside their home country than nationals of any other country in Europe. Yet South Americans (for example) coming to Europe mainly head to Spain, Germany or Portugal.

With a study visa, he is only allowed to work 20 hours a week. Playing for Arsenal and studying will be difficult, and the Home Office won’t buy that.

Is he handsome enough to marry a brit girl? Just for lol.

We got our self another exciting young talent imo

He is shining in Rio.

Hope the Ryo connection stops there!

Hey man leave ryodinho out of this. Injuries ruined his career. Still remember that time he destroyed Chelsea while on loan.

Plus I will never forgot his work ethic. Doing cones and stuff.

Do not spoil the lovely pun, buddy.

Normal visa rules don’t apply to EPL, as footballers can get work permits far too easily. The pay requirement for work permit is only 200,000 per year which is nothing for a PL club. thus much harder rules apply, sadly

Can you please explain why that is? Surely the entire point of questioning someone’s immigration status or work visa status is to ensure the said immigrant is not a burden on the state? Surely even youth footballers are better paid than most wrecking class people. Strange rule

Serge gnabry has been unlucky with injuries and the way he was treated by west Bromwich. I’ve never doubted his talent play him arsene and give him a contract extension seàn

I’m really excited by Asano. Hopefully he keeps on silencing his critics as he is doing now. Having a good tournament so far along with Gnabry. Asano is showing that being young, from a not so big league and not a big name player doesn’t mean that you can’t be or are a good player. Best of luck to both Gnabry and Asano in the Olympics.

Arsenal generally perform at their best when there’s no pressure on them. Given the anger towards our lack of signings, its safe to say no one is expecting Arsenal to finish in the top 3. Hopefully we get off to a flier which allows the likes of Ozil, Giroud & Koscielny to be eased in & take us to a long awaited title…

i think both asano and gnabry shine next season.

And people think we need a Striker…

Great goal. Hope he breaks out when he gets his opportunities.