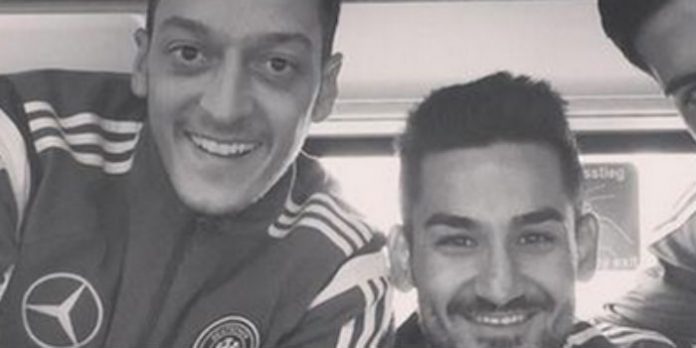 We live in a world where a superstar footballer, still soaked in sweat and with an opponent’s shirt wrapped over his shoulders, can step straight off the pitch after scoring a last minute winner, head to the changing room, pose for a selfie, choose a suitable arrangement of emojis, come up with a top notch hashtag and within minutes share his joy with fans around the world via social media.

Well, that’s what we like to think happens. Of course, in this age of carefully crafted media-friendly brand cultivation, it’s pretty obvious that the biggest names hire a helping hand from time to time. Which is fine, assuming they don’t let the mask slip.

It looks as though Mesut’s people made a bit of a cock-up the other day when a tweet, that was supposed to be sent from our midfielder’s account after the Chivas friendly in California, was posted by Ilkay Gundogan; Manchester City’s new recruit.

Both are top quality German international midfielders born in Gelsenkirchen to Turkish parents…so you can just about understand the confusion. It was quickly deleted, but as is often the case with the internet a quicksilver Twitter user captured a screenshot.

Nothing major, a minor gaffe that’s more likely to cause Gundogan a headache with the fans of his new club. Could have been a lot worse for both men…let’s hope the guy or gal running their accounts isn’t also in charge of keeping their partners in the loop.

We suggest if you’re left ‘fuming’ by this, you may be doing life a bit wrong.

Still, it could have been worse, as some of these examples show:

The biggest takeaway from this:

Even though he’s supposed to be on holiday, Ozil’s with the team and watching them play. In comparison, 100 million rated Paul Pogba is partying in LA while the two clubs sweat over the transfer details.

I know which one I’d have in my team.

Don’t mind me but what is Pogba supposed to do during club negotiations?

God forbid a footballer enjoys himself in his time off after a long season and the Euros. It’s not like Ozil wasn’t holidaying in LA either.

So, the Rooney one is actually real?

You’d think he was more of a La’s or The Farm kind of guy.

Yup, he really did write that.

It couldn’t be real. There’s no way Wayne Rooney is literate.

The Kane one about the slags doing 9/11 made me chuckle. “Slags” being the newest word to refer to scumbag extremists in my experience.

Sam and Rooney’s almost killed me. My colleagues at work wondering why I’m so teary eyed and breathless.

This article made me cry with laughter in the middle of work. Excellent stuff!

Well, whatever works for you.

How can they fit in a cologne

I laughed so hard on this one. And the spurs 1-1 at newcastle hahahaha

Are all of those examples real? Some of them seem too good to be true

Harry Kane has just become more of a cock, didn’t think it was possible.

What has Mahrez been tweeting? *hands still clutched in prayer*

Hahahahaha blogs you are LEGENDARY!!!!

You couldn’t at least change the date and time of these twitter posts?!?! At least make it look more realistic, because you know, nothing you say or do is sarcastic.

Yeah, shit – that would have really fooled people if we’d done that. Wish we had you on board to advise us on SARCASM.

1-1 at Newcastle gets the biscuit! No wonder it’s bound to wind people up. *gets coat*