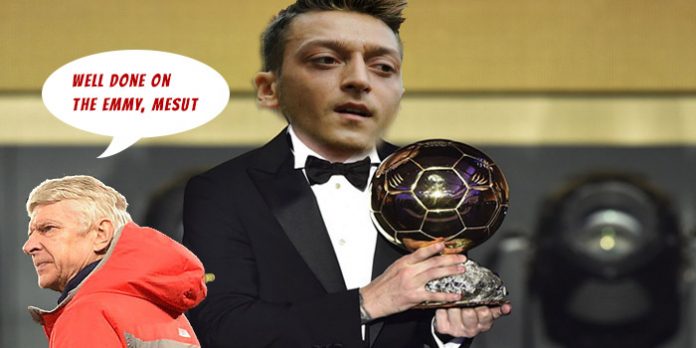 How do you emphasise the fact you’re not really interested in the Ballon d’Or award?

If you’re Arsene Wenger, you congratulate one of your players on being nominated, even though he’s not made the shortlist.

To give some context, the boss didn’t go out of his way to praise the German playmaker, he was instead pressed into making a statement by a journalist who ignorantly believed that Ozil had been included on France Football’s 30-man list.

Here’s how the conversation went down…

No. That has not changed.

I didn’t think it would have…but what’s your reaction to Mesut being among the thirty candidates?

Certainly there is a big satisfaction for [Ozil] and for us as well, but I am against it because I think it gets in the head of players. We have seen many people only thinking about themselves because they are obsessed by Ballon d’Or and not by the team performance and I believe football is a collective sport and we live already in a world where everything is individualised. We want to respect what football is about, first about the team effort.

Do you not even mention it then? Would you not go and say ‘well done Mesut’…

Of course, I encourage and congratulate the players who do well and I’m happy for that. But when you look at the history you do not always think that it has been the most objective decision always and I think that the players who are the best, we know very well about them. Let’s take care of those who are not as much in the glory. The best – we know all about them.

FIFA are no longer working with France Football on the award, does that change maybe reduce the importance of the Ballon d’Or prize?

Obviously, it’s somewhat farcical that Mesut Ozil and Alexis Sanchez missed out on making the 30-man shortlist. On the plus side for the boss, it does give him some leverage to barter down their new contract demands…

“Didn’t make the Ballon d’Or list lads? That’s another £5K a week off if you ask me…”

Was the journalist testing Wenger? What if Arsene figured that out and wanted to pass the test?

The Fifa Ballon d’Or – an award given out by one of the most corrupt organisations in the world, to players who play for either Real Madrid or Barcelona – two of the worlds most crooked clubs.

I don’t understand the fascination with it by the players to be honest. I’d be far more interested in winning trophies with my mates then being anywhere near that ego circle jerk stuff.

It’s no longer associated with FIFA

Thanks blog for acting as if that nullifies what IamaGoober said. 😐

Please guys, there is a way to boost Ozil, the fans need to start using it. He will ABSOLUTELY ADORE YOU for it!

And please guys, what the fans HAVE TO start doing, is to say ALLAH hu AKBAR! when he scores. He will want his daughter to marry YOU, if you do this with FULL appreciation for his contribution. Try it out, what do WE fans have to loose. Dont be all Jihad about it either, there is a way to say these things that is a lot more pretty, lets figure it out. Algamd.

This is great, now we have people willingly writing clickbait comments too. What an era.

What do you actually know anyway?? …hmm. with your fancy football website and general footballing knowledge and stuff..

So in your face.

“FIFA are no longer working with France Football on the award, does that change maybe reduce the importance of the Ballon d’Or prize?”

Why would you put that question to a man who obviously already doesn’t give a shit about the award?

For the same reason you’d ask him about the nominated of a player who wasn’t nominated. Apparently they’ll give a press pass to anybody.

I might apply for one actually. Do my own little stadium tour, a bit of autograph hunting. Too easy.

The transcript doesn’t do justice to Wenger’s response. “I don’t know,” he says. Everyone waits for his next sentence, for him to elaborate. And waits.

Interesting that Aaron did get on the list though. What do people think of that?

That performances in international tournaments are given too much importance. Having said that, if that were true then Alexis should have been nominated too. So not sure what I think of that now.

Why? Ballon d’Or is awarded to the best player in the world. Right? Not just the best in Europe from what I know.

You’re spoiling the fun with your facts.

I think the picture has been Photoshopped.

A Different George
Reply to  Vedant

You’re spoiling the fun with your facts.

I think individual awards in general are rubbish. Great teams are great not only because they have great players, but because those players play great football together. And this award in particular in recent years has been nothing more than a proxy battle of the Real-Barca rivalry.

I’d actually be afraid that the players would use it as a negotiating card, not the manager. “We obviously didn’t make the Ballon d’Or shortlist because we play for a club who never wins any trophies, give us more money.”
And they’d be right, and I’d give them more money.

Thank god you’re not in an important position to negotiate anything.

Wenger probably told France Football to exclude his players? Because he don’t like the idea?

Useless award… as is man of the match… so pointless

MOTD almost always goes to whoever the idiot media chose for interview before a ball was kicked. Utterly meaningless award.

Great idea – we could determine the winners of each through a series of matches. We could call them the Uefa Champions league and the Fifa World Cup.

I’m not sure it’s farcical that Sanchez didn’t make the list. Based on performances last season, which of the nominated inside forwards should he have been ahead of?

True – I don’t think Alexis actually had a particularly good season by his (extremely high) standards – until Iwobi appeared and he moved to the right I actually wanted him dropped most weeks since the new year. Özil not making the list though, that is a farce

The European journalists didn’t even put Mesut on their 57 best players of the season 2015-2016 list. Go figure…

They’re all embarrassed that he isn’t and never has been nicking a living.
Unlike 99% of football journalists.

Majority of the winners are attackers that score the most number of goals. How about the goalies with the most fantastic saves or with most clean sheets, or defenders with the most clearances/blocks or the midfielders with the most creativity etc. These are all footballers doing their jobs perfectly just like the favourite attackers but the world only consider the attackers as the best. they should categorize the award and not just make it Ballon d’Or for attackers.

@chuqu, you are spot on right. Why don’t they? They really should…

Non article related comment. An advert to buy tickets for Liverpool games is featured on this page. Thought you’d wanna know as I doubt it’ll get too many clicks. Viewing the page from Denmark, if that helps.

No idea if it’s a problem with my browser but the Next Match widget has been broken for a while now.

Maybe it’s the same for some others as well?

There’s a new calendar kinda widget now. Is that not working?

All good once again, thanks! (:

Or was AW being slightly sarcastic, as in ‘it’s the best 30 players, so it goes without saying that Ozil will be in it, if he’s not then it isn’t the best 30 full stop’… 😀

I wet my arm pants.

I’d see a doctor about that if I were you.

What’s the point of the golden ball in our time and age anyway? It’s not like it’s a marketing rotation between an Argentine and Portuguese player.