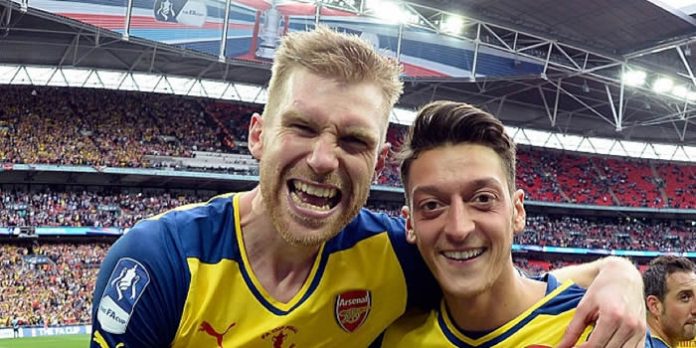 German side Hannover 96 say they’d love a reunion with old boy Per Mertesacker but admit the chances of the Arsenal captain swapping the Emirates for his hometown club are very unlikely at the moment.

The BFG started out at the club 21 years ago playing under his father Stefan, one of Hannover’s youth coaches, and went on to make 82 appearances in the first team over the course of three years after making his debut as a 19-year-old.

Currently sidelined by a knee injury, Mertesacker admitted this week that he’ll turn his attention to his future in January by which point he’ll only have six months left on his current deal at Arsenal.

Asked about the possibility of signing Mertesacker, Hannover 96 director, Martin Bader, admitted his main focus is returning the club to the Bundesliga.

“Everybody knows what Hannover mean to Per. Maybe we can make him enthusiastic about a return.

“But re-signing Mertesacker is not our main priority at the moment. We are playing in the 2. Bundesliga right now and he is Arsenal’s captain. A lot of things will have to happen in order to make a return a realistic option.

“First of all, Hannover will have to return to the Bundesliga. A transfer is still far away now and it seems like a crazy thing to even discuss it. But anything can happen in football.”

Arseblog News wouldn’t be surprised if Per is offered a new short-term deal in the coming months. His experience and leadership qualities are obviously admired within the camp, as evidenced by the fact he was handed the captain’s armband by the boss despite suffering a serious knee injury on the eve of the new season.

What’s more, he’s loved by long-term friend, Mesut Ozil, who told Arsenal Player last week, “I’ve known Per for a while, because we’ve played together in Bremen, for the national team and here too. I can only say positives about him. He gives everything for the team, not just for himself, but for everyone.

“Off the pitch, he watches the games and comes into the dressing room. He’s just a role model and we’re pleased to have him here. I want him to get fit again and back on the pitch as quickly as possible.

“I sincerely hope that he comes back really quickly.”

While I do understand how the dynamics of Arsenal’s game are returning to their more traditional mobile and very lightning fast ways, I’d be very sad if Per was to leave soon. Not only for the nostalgic fact that he and Arteta had a massive hand in steadying our ship when we really needed guidance to our kids, but also because I think there is still something in those long legs to offer for Arsenal. Intelligent as he is, I think Per should stay. At least one more year. Then we see what happens after that. I think even he… Read more »

It wouldn’t be wise to let Per go just yet, Leadership is always a positive, even off the pitch.

Is there a Grammer issue with the article?

“Arseblog News wouldn’t be surprised if Per isn’t offered a new short-term deal in the coming months. His experience and leadership qualities are obviously admired within the camp, as evidenced by the fact he was handed the captain’s armband by the boss despite suffering a serious knee injury on the eve of the new season.”

This paragraph doesn’t make much sense.

what doesn’t make sense buddy? he’s deemed the best fit for captain by arsene even though he has a big injury and other team-mates continue to speak highly of him soooo…

Damn, I’m slow to this party.

What all the other pedants said.

Was waiting for the ‘but’, it didn’t arrive.

Guess that should’ve been ‘would’

Arsenal have the best defensive record in the premier league from when he arrived up till now. 2 golden glove winners least goals conceded in that period Still dont understand how he is a bad defender and cant lead having played alongside Vermaelen, Koscielny, Monreal, Debuchy and Gabriel, who are all unique defenders and somehow made them all look like genuine world beaters. For me he is one of the greatest defenders I have ever seen in my life. His style of play cant even be reciprocated on video games because it is such a subtle and proactive style from… Read more »

Massive fan of the BFG and I reckon he’ll be offered a new deal. Sadly won’t be first choice anymore whereas he will almost certainly be guaranteed regular football at a club like Hannover. It’ll be his choice. Personally I hope he stays.