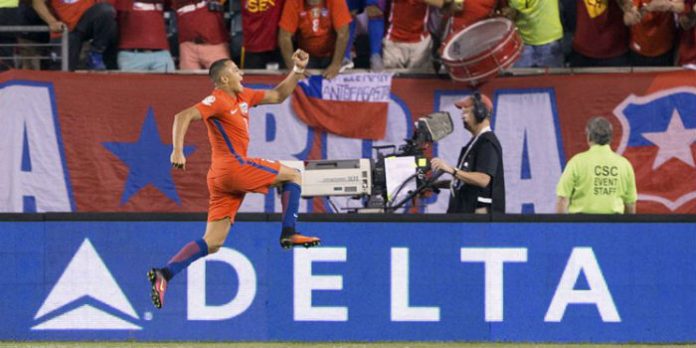 Chile’s international squad appear to be victims of their own success with Alexis and co. likely to have another summer of international duty ahead courtesy of this summer’s Russia-hosted Confederations Cup.

The traditional World Cup teaser – a sort of practice run for the host nation – is set to take place between 17 June – 2 July, just two weeks after the Champions League final. It also clashes with Arsenal’s tour of Australia.

The draw for the tournament is taking place today in Kazan and will see Chile pitted against the likes of Australia, Chile, Germany, Mexico, New Zealand, Portugal and Russia. Africa’s representative will be decided on 5 February 2017.

Alexis signed on at Arsenal in the aftermath of the 2014 World Cup in Brazil and has spent consecutive summers playing Copa America matches, first in homeland Chile in 2015 and then the USA last year.

Assuming La Roja improve their World Cup qualification form and qualify for the Copa America in 2019 he might not get another break until 2020. Remarkable stuff.

Chile are also set to take part in a friendly tournament against China, Iceland and Croatia in January. Thankfully, Arsenal are not at liberty to release Alexis.

Go do that voodoo that you do so well!

if he is running himself too ragged to play for us fully, just sell him man. and get someone else more dedicated to us.

are at liberty not to release sanchez, you mean

Chile vs Chile sounds intriguing. I played that on fifa

Get bent!
Reply to  Pavan

Alexis to play for both sides.

Wouldn’t it be a pisser if he got injured playing against Chile.

I feared the worst with that headline. Injury ends his season and he’s going to Russia for ultra rehab and training. Feel free to down vote my comment. I deserve it, for such horrific negative thinking. I wish I could down vote myself

TGSTEL would never be so negative. You sir, are an imposter.

Don’t be so harsh with yourself. Personally, for a moment I thought he was joining Steven Seagal in receiving a Russian passport from Putin!

Strange you mention Sanchez and not Özil and Mustafi if Germany is in this tournament. Don’t you care also for these ones or did i miss something?

Germany, I think is more likely to give their key players rest and field a weakened team. After all this is just a glorified trial run for world cup.

The problem is the special Copa America Centenario just played this summer. Normally, the Copa is played every four years in the the summer after the World Cup and so most South American players would play two summer tournaments consecutively followed by two summers off. However, the “special” Copa Centenario played in the US was played immediately after the official Copa 2015. Having qualified for the “honor” of the Confederations Cup, Sanchez and Chile have the potential of playing in SEVEN consecutive summer tournaments. If Chile qualify for the WC 2018, Sanchez will for all intents and purposes be playing… Read more »

Sorry that’s six consecutive summer tournaments and seven years of football but I think you get the gist.

I think it was more directed at the fact this would be his third summer in a row with a tournament, as they held a Copa America in 2015 when there was no football action for the likes of Ozil and the other Europeans.

You missed the bit about consecutive summer responsibilities with Chile ever since he joined Arsenal. Keep up Alex!

Chile vs Chile? I didn’t know that was possible!?

Alexis must be delighted -more football in the holidays?? now thats a holiday! If only I have his work ethic..

I doubt he will be an Arsenal player next year so don’t care really.

I have tickets for Arsenal vs. Western Sydney Wanderers. I was hoping to see him in the flesh. Guess I’ll just go fuck myself hah

I am going to both games. Could see Ozil and Mustafi out as well. Outrageous!

FFS. I was hoping to see the lil master in action in Sydney.
On the other hand chile has drawn Australia in their pool at the cup so I get to see him teasing our socceroos defence on telly atleast.

You go right ahead and chew that foot off.. if it means Sanchez gets to Sydney

Play him into the red zone end of the season so his hamstring goes early in Russia and he’s recovered for the new season. Only way to manage his reckless self preservation.