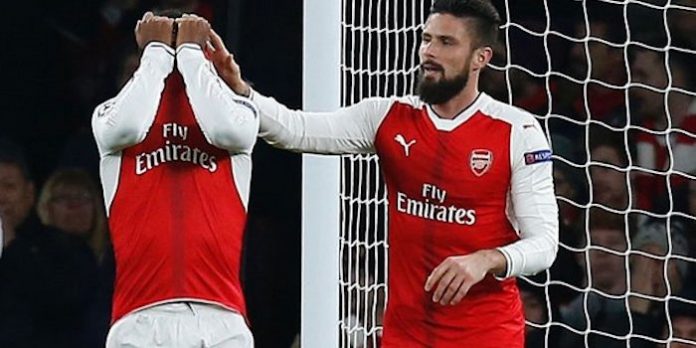 Alex Iwobi has apologised for his own goal against PSG in midweek.

The 20 year old nodded the ball into his own net, and called it ‘the worst thing possible’. He was about to be taken off anyway, so had no chance to make up for his mistake.

“I heard a shout from David Ospina, but I reacted a bit late,” he said.

“I wanted to clear it but was in two minds and ended up doing the worst thing possible. It is my mistake and I apologise.

“I hold my hands up. But I have to move on and be better next game.

“Fortunately I have had a lot of luck and most of it has gone well.”

Can’t fault that attitude, and no doubt he’ll learn from it too. Also, there’s no need for him to apologise, but that he did says a lot about the way he thinks, which augurs well for the future.

Iwobi hasn’t been sharp with his passing recently and quite often our counter attacks break up especially in the last PSG game because of him. Understandably so, as at the end of the day he’s a 19 year old kid trying to make his mark. He will have rough periods. I’d like to rest him a bit and give Ox a chance for a few games.

Iwobi represents the future. Organzational dynamics reveal that change and transitions take time. There is still an element of the “same old Arsenal” lingering about. Iwobi, the Jeff, Miles, the Willocks, Martinez, and so forth have a different about them. It will take time but I do not smell defeat from the top management. We need to win games, but it still feels like a volcano waiting to erupt. Dear me when it does so. Tarry my child.

I still prefer him to the OX starting. At least he works hard and puts himself about especially defensively I still have low confidence on the OX as a started he sleeps through games too much for me when he starts but I like his impact off the bench

Didn’t he come off the line, and should not have? I’m just wondering if enough time had lapsed from the corner kick for him to leave the goal line (he was guarding that post if I’m not mistaken).

Some of the senior players could learn a thing or two from this young lad.

Thaatarsenalguy
Reply to  Andrew with an A

the top earners for example. who just go through the motions.

Keep your chin up, Iwobi! And come on you, Gunners!

Poor lad he looked miserable when he was on the bench! I love his attitude though and would love to see him respond on Sunday!

Gabriel gave him a nice kiss to cheer him up to. Unlucky for the kid, but you get the feeling he comes back stronger.

The rest of them should be apologising for being shit in the last few games.

To be fair, he was shit as well. And it’s not like anyone else’s attitude had a fault. Giroud immediately consoles him and so do the substitutes as soon as he goes to the bench.

Gabriel gave him a kiss! 😀

He is just a kid, he will learn from it

Second in the group is not really bad for this year!!! Bayern Munich, Real Mardrid,,, are in the second too. We can beat Barcelona !!!

To be honest it’s barely an own goal. More a deflection. It happens. Hopefully he has something to prove Saturday.

No need to apologise lad.
It’s always defender first. Even if you heard a shout from the keeper you have to clear it.

We need to play more of Iwobi. In fact we also need to play more of the Ox, Giroud, Granit, Walcott etc. The way I see it, we have two selections for the top 3 at the moment- Iwobi…..Alexis…Walcott Alexis…..Giroud…..Ox The first combination was effective start of campaign. Maybe with some alterations we can switch Ox or Lucas when he returns for Iwobi but this is the mobile unit that puts pressure high up the pitch, exploiting space when teams are intent at coming at us. The second selection should be preferred if we face opposition intent on retreating into… Read more »

Where is Ozil for almost 3 games now??? Leave Ramsey alone because he his not hiding on the field that is why people see lots of mistakes from him. COYG ON SUNDAY. ANY WIN IS WIN AS LONG IS 3 POINTS

Your a funny guy. It’s like saying “where is Henry, leave Denilson alone” ???

He and Theo have apologized for individual errors in the past week. I wonder if the manager/locker room is stressing a greater degree of accountability this year. Would be a good development.

It may have glanced off Iwobi’s head, but it was a team performance that brought that moment about. I get the feeling they’re all well aware of it too.

I genuinely thought it was really sweet when Gabriel gave him a kiss on the cheek as he sat down on the bench. Say what you want about this team (most probably being justified, on current form) but they do seem to have good spirit

We are in November n just a few days before the end and up to this point Wenger seems clueless about the best midfield pairing that can bring balance to our team in the absence of Cazorla!