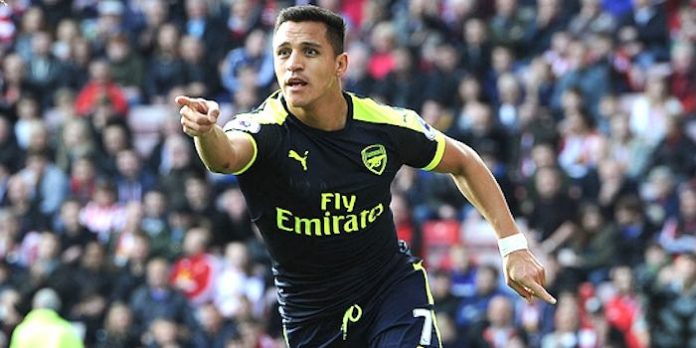 A report by Chilean publication El Grafico claims Alexis Sanchez could still play against Uruguay as his country desperately try to get their World Cup qualification back on track.

The Arsenal striker missed Thursday’s 0-0 draw with Colombia after sustaining a low-grade hamstring tear in training. He remained in Santiago to undergo rehabilitation and his doctors now believe the inflammation has subsided enough for him to play without pain on Tuesday night. .

While that may sound like good news on paper, it’ll no doubt have alarm bells ringing at London Colney.

On Thursday, Arsene Wenger called on the Chilean medical team to share the results of an MRI scan with their Arsenal counterparts claiming any decision to field the striker could prove ‘suicidal’.

Arsenal face Manchester United and PSG after the Interlull and a further eight games across three competitions before the end of 2016. If Alexis were to exacerbate this existing condition on Tuesday it’s fair to say he could well face an extended period on the sidelines.

Last year, Alexis pulled up with a hamstring problem against Norwich on 29 November and didn’t return to the fold for two months.

It’s a newspaper report, so it means fuck all.
Maybe they’ll play him and maybe they won’t…

They will play him.

why not we make chile FA pay for his wages, while we give them a helping hand by allowing alexis to play for us week in week out.

we are helping the chile FA to keep him fit for all their international games anyway.

Alexis has got to take some responsibility too….AFC pay his wages.
He shouldn’t be risking a 6 week injury in an irresponsible way.
If all this goes horribly wrong, it could jeopardise upcoming transfer talks too.

apologies to Chilean fans, but I hope they don’t qualify. This is the only bloody way this guy ever gets a break.

Sorry again Chile fans, but you’ve had so much success lately so I’m sure you’re not offended 🙂

Agreed. Back to back Copa America trophies are enough.

They play him in a position where he doesn’t have to run and can just pass – like a base midfielder – John Barnes in his later years – a position that doesn’t need much sprinting .

Yeah, it suits him well, cause he doesn’t run alot anyway.

1) It doesn’t matter.
2) Alexis doesn’t have a jog or a walk. I’m pretty sure he sprints everywhere he goes.

Play his as the goalkeeper and he will still try running around to score a goal!

Oh God, Chile would play him even if he got crippled.

I was at the 7-0 game v Mexico and he played as an out and out left winger running 80 yard sprints the whole game.

Let’s hope he gets some rest this week and comes back fired up for Manure.

I’ve already got enough work to do in November!

Why do I get the feeling there is a bit of xenophobia in our reaction to this. If, for example, it was the German medical team not Chilean, we would all be reacting with a “Thank God he’s not seriously injured and he’s back playing. If he’s playing for yhem, he’ll definitely be fine for the Manure game. Woo hoo!” But because it’s Chile, the reaction is “Fuuuuccckkkk he will definitely make it worse as they clearly don’t know what they’re doing. He’s going to be out for months”. Let’s just be happy he can play this week and take… Read more »

I have no idea why you would think that. The issue here is that the Chile medical staff is not communicating enough information with the Arsenal medical team. They are not collaborating adequately. Doesn’t matter what country they’re from, that’s highly unprofessional.

rubbish, I remember similar things being said of Wilshere and Thethc (parseltongue) Fabregath a few years back.

With all due respect, that’s complete bollocks. We’re concerned with the fact that this time last year Alexis went through a very similar situation to what he’s going through now and ended up on the sidelines for 2 months. Nothing to do with the country he plays for.

Honestly, I’ve seen some ridiculous examples of playing the racism card in my time but this just about takes the biscuit.

Your trying to be too clever, it clearly don’t suit you.

Best thing maybe to rest him against man utd, regardless if chile play him or not

Why do we have to carry that burden though? It’s a game of give and take I concede but seems like there is only take when it comes to his national team commitments.

Yeah, qualifying for and winning the World Cup is not as important as the EPL title. Arsenal are a club, not a nation of 17 million.The season runs till May. Just pray for Alexis.

Alexis, has to take some responsibility if this goes horribly wrong. I understand he wants to play for his country but at what cost? If there is a significant risk of doing damage to his harmstring, what benefit is that to anyone. His employer will lose him, so would his national team. Be smart about this, Alexis

Shit this is crazy! Surely he’s got to speak up if he’s not fit. Hopefully he’ll come out the other end unscathed!

I think we all saw this happening from a mile away. I think the problem we have with Chile stems from their current desperate situation and their prior lack of consideration concerning their players long term futures. Only a disabling injury would keep them from playing Alexis and even then I think they would do a speed test with him on crutches to see if he could keep up.

Yes. Plus, if he’s out for two months, we’re screwed, but would he even miss a SINGLE game for them (too lazy to look it up)??? Clearly a medium term injury is way worse for us than it is for them. Very bad form. This is the way to poison club-country relations.

He would not miss a game for Chile even if he was out for four months. The next international break is in March.

What a bunch of cunts, and if Alexis is stupidly sacrificing potentially six weeks of playing time for one game, he’s not much better tbh.

If they fuck this up, we should withhold from the next three international breaks, regardless of what the fucking laws are.

… know our luck it would be nothing less than eight weeks. I’d get them to pay his wages too! Fucking wankers.

If it was a game that Arsenal had to win to keep the title hopes then we would have done exactly the same thing I am afraid. Wether we like it or not, if there’s a remote chance that Alexis can play, he will. We just have to hope that we can rest him against United and PSG (may be use him from bench)

“If it was a game that Arsenal had to win to keep the title hopes then we would have done exactly the same thing I am afraid.”

This is because he is an Arsenal employee.

And we season ticket holders pay his salary.At huge expense to ourselves. He owes us Not the other way round.

It’s yet another fault with these international breaks. When is the next one? 3 or 4 months away? So they will play him, after all he’ll be fit and raring to go next time around.

Do they cover his wages if missing for the next 2 months? If not they should do.

I’m not sure Sanchez really cares what Arsenal say to him. He is proud to represent his country and will do so regardless of a potential injury. Wenger is in a corner because if he argues against him it will weaken his chances of getting Sanchez to sign a new contract. If he does nothing and Sanchez gets injured the fans will go nuts.

I’m so pissed I just cried my pants.
November is like an ingrown toenail that just keeps getting deeper n deeper.

Next time we can do like man utd and say all our international players got injured at the last minute and wont be traveling anywhere.

That wouldn’t work with Sanchez, because he’s always desperate to play for his country – you’d have to lock him up to prevent him from going. And he knows that if he gets injured, Arsenal will still be paying his wages,whilst he contemplates his next contract, either with Arsenal,or elsewhere. Frankly, he’s got us by the balls and he knows it.

He’s good but he’s not that good. Arsenal shouldn’t be held over a barrel by anyone.

Guess Giroud is about to get more game time. Walcott and Iwobi/Ramsey/Ox on the wing….maybe Ox steps up.

Chill out! Not sorry 🙂

It’s simple, Chile without Sanchez and Vidal are a bunch of sunday league players. While they’re dropping points another south american NTs are progressing (Perú for exemple), so they need Sanchez, even a ‘half-fit’ one to try to rescue their chances to qualify to Russia.
And tbf, I think the Chileans (and the Chile NT staff) does not give a single frock to Arsenal’s requests.

As nice as it would be for Chile to be responsible, it doesn’t seem like it will happen. If Sanchez can get to the pitch, they’re going to play him.

Arsene needs to find a way to rotate him and give the guy a breather. We have strength in depth & need to find a way to use it. It’s the only way he’ll see rest without an injury setback forcing it.

It’s not popular but we have to rotate against bottom table teams and in the cups to push on for a full campaign.

It.s kinda hard to rotate when Welbz,Lucas and Chuba are all injured and Olly is a very different style of player

As much as we like Alexis I think we have to accept that he will always put Chile first and Arsenal second (just like Wilshere actually). Both will go a long way to keep their place at NT irrespective of what that means for the Club.

I have a feeling this may be where we get fucked. Absolutely dreadung next weekend. No bellerin, sanchez and carzorla massively disrupts the balance of the team. Especially with no perez as back up. I hope to be pleasantly surprised but i cant see this ending well. At least we cant blame arsene this time. Just rotten luck:(

With Alexis not playing this weekend against United, the big question becomes how do we set up? We could keep things simple and plunk Giroud and Jenkinson in for Sanchez and Bellerin (4-2-3-1) and hope we can make the most of our chances in a much slower build up, or we could turn to our only real advantage left and overload the midfield: we’ve got Coquelin, Xhaka, Ramsey, and Elneny healthy, so rather than 2 we could deploy 3 of them to win the midfield and try to control the game (either with a 4-3-1-2, using Walcott and Giroud as… Read more »

Alexis is a great player but he’s not exactly the responsible type. He’ll play even if it could potentially lead to several week injury. And Chile will play him because why should they give a fuck about Alexis and Arsenal’s domestic season, he’ll be fit by the time the next international rolls around and that’s all that matters to them.

if Alexis plays for Chile whilst injured, and against the wishes of his club who pay his wages, in my view he will be in breach of contract…I like him as a player but no one is bigger than the club…

As of today, Monday evening, according to TVN, major Chilean network, The coach said “Alexis is 100% and ready to play Tuesday ”
There you have it folks.