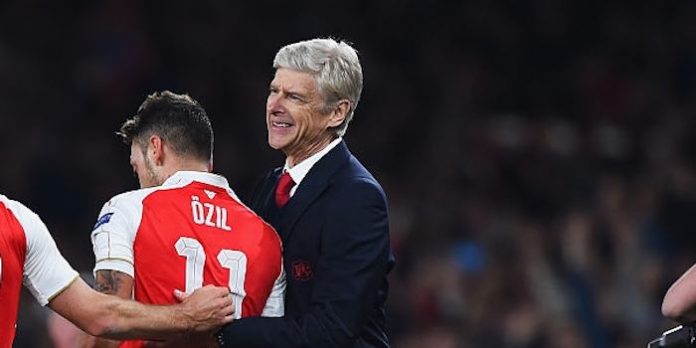 Arsene Wenger has, more than once since his arrival at the club, said that Mesut Ozil was a player more than capable of getting well into double figures when it comes to his goal scoring.

With 7 to his name already this campaign, he’s well on his way to beating his season best total of 8 – something he’s achieved twice since his 2013 arrival.

And his recent form in front of goal is no surprise to the Arsenal manager as he looks to the German international to continue that in the North London derby on Sunday.

“I convinced him that he has it in his locker to score goals,” he said.

“He was more focused on giving and looking. Today he understands he can have those qualities but as well be on the end of things.

“The timing of his runs is good. In training I noticed he is a very good finisher. When you have that in your locker you have to try to get it out. Slowly, he now realises that.

“Now he makes more runs to score goals. On top of that he has a fantastic attribute of a guy who is a good finisher – he is calm. You notice all the finishers are killers.

“That means they keep their nerve in front of goal and he has that.”

The Frenchman believes his physical improvement is also playing a part.

“He left some people sceptical – saying he didn’t go too much into challenges or tough contact.

“He’s a player who is more a guy whose strength is to get out of things but on the physical front I believe he’s improved as well.”

Let’s hope he can do it on Sunday.

Edu: Ozil not picked because of performances

Loving the change in tactics so far. We knew he was an assist machine but people still called him lazy because of hIs effortless style. Now he’s breaking forwards and getting beyond the last man, yes he’s slowed down on the assists but he’s putting the ball in the net himself. Nothing wrong with that. Hes not just a one trick pony. He can do it all!

I.m liking this seasons Ozil. The team as a whole looks much more dangerous when Ozil makes foreard runs and threatens to score..opposition now has to take his goal threat seriously and that gives a little extra space to our other attacking players.
Also I like to see players taking responsibility in front of goal when it is not done selfishly

Arsene has an eye for potential that is second to none. One of his biggest strengths has to be recognising what a player is capable of.

The media will always overlook these qualities but this reasoned faith in his players is more than admirable and his loyalty to said cause cannot be faulted.

Eternal kudos has to go to him for this.

Yep 100%! Bellerin – plucked from Barcelona as part of the Fabregas transfer saga. No one back then probably even knew that we scored both Bellerin and Toral along with the cash. Kos – Little known back in 2011 and now one of the best CBs in the league. Cazorla – No idea why he wasn’t picked up by other “big” clubs but Arsene knew he was tits and promptly signed him – for a bargain as well! Giroud – He’ll always have his critics but still a very solid signing from relative obscurity. Coq – Okay he kinda got… Read more »

A lot of us see what a player is. Arsene sees what they can be which is why he is a legendary manager.

I hope we see another sexy Ozilism on Sunday.

comparisons to bergkamp at this point are as inevitable as cliche. we all want it to be so. now i’m shitting myself that it actually might be happening with him and the squad around him. silk and steel run through out this team.

You heard him Dick, go track down Jason Bourne and Carlos the jackal this January!

Thank you Low, for giving Ozil a much needed rest. We will return the favour come April, with the league already won!

These new comments asking Ozil to commit and become a legend makes me think contract negotiations aren’t going well. Also no comments on Sanchez’s extension makes me nervous. We must sign them to be taken seriously.

Anyone who doubts wengers status as a great manager can look no further for confirmation of this fact than his accomplishment of making ozil a better player than he already was. Unbelievable. Not only is he a magician but he’s now scoring goals, hat tricks even, tracking back and tackling as well. Complete player.

That my dear friends is how you improve players as a manager. It’s a sign of a great manager. Taking a top top quality player and adding a few more “tops”

Arsene is simply the best at managing clubs and people. He unearthed gems, he improved world class yet some touts will still by hyping ‘the special cunt’ who is clueless about players ability and potentials. Looking forward to our biggest win of the season so far….NORTH LONDON CAN NEVER CHANGE FROM RED…#NLD…#FOREVER IN OUR SHADOW…[email protected]

To those individuals who asked who we would prefer to beat out of spuds and manure – I loathe both and want to see both given a good thrashing!!

True, such a good time to play them, both teams out of form. We have to take advantage of that and give them a good hiding!

Won’t be in doubt.
Coygs.

Have to admit i was one of the doubters. Saw what i thought he was all about last season, however, he has surprised me totally this season. The fact that Wenger has changed the formation up top and given Ozil exactly what he likes, ”PACE” we can now see him at his very best and actually getting better.