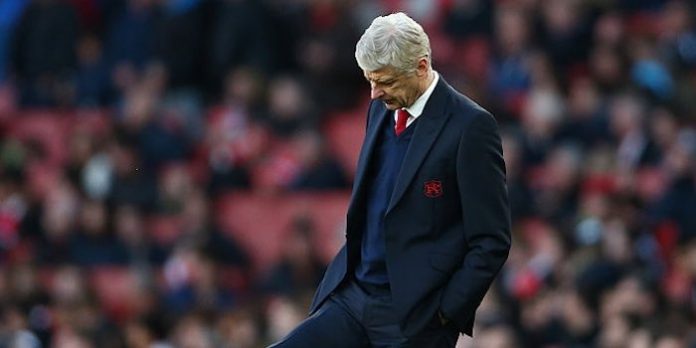 Arsene Wenger admits that last season’s game at Old Trafford was one of the worst that his produced in recent times, but insists it was not representative of his team’s overall form.

Having beaten Leicester 2-1 with a late Danny Welbeck winner, Arsenal went there knowing that a win would make a big statement in the title race. However, they buckdled under the pressure and lost 3-2, a result which was followed by a home defeat to Swansea.

However, Wenger says it was not a game on which his team’s form should be judged.

“That game was an exception,” he said. “We had other big games, we played at Manchester City, Tottenham, everywhere.

“On that day we didn’t turn up with a performance so that does not mean it is the normality – it is the exception of the year.

“We have to show on Saturday that is was the exception and we have to turn up. We beat Man United 3-0 at home in the same season.

“Today, you fail one time and the reaction is: ‘Oh, they failed, they will fail again.’

“Life is not like that. If you turn up 25 times and you lose one game, people take that one game as a normality. No. You have to turn up the 25 times before, believe me.”

The Arsenal manager was keen to downplay any ill-feeling between himself and Jose Mourinho which might overshadow the game itself, saying, “What is most important, what is important is the quality of the game when it starts.

“When you watch Real Madrid v Barcelona you want to see a football game and you are never disappointed.”

Let’s hope we can go there and get our first win since 2006. It’s long overdue.

Just win. Please. Win to make us happy. And Mourinho unhappy. Play beautifully if possible, as playing Wengerball and winning is the most glorious feeling in football. But we don’t click in every game so if the ball needs to go in off Kos’s elbow/face/pointy kneecap to secure the win after 90 minutes of sideways passing in the face of a parked bus then that would be most welcome too….COYG!!

Make Wenger happy, the players owe him. Every time I hear about ‘his’ record against mourinho it pisses me off and i almost feel embarrassed for the club. The players have to put it right. Arsene deserves his share of the blame but he carries almost all the it (despite the myriad of ridiculous red cards we’ve had v chelsea down the years). Similarly our record at old trafford, too many times we just haven’t shown up. I rarely look at tactics after these results, usually i feel the players haven’t done themselves justice. Not that i have ill will… Read more »

Our record at Old Trafford plus Arsene’s record against Mourinho.. I’m so not confident. This would be one of the sweetest victories if it happens. COYG!

Early kickoff, far away from home, against United (one of our bogey teams), managed by Mourinho (one of Wenger’s bogey managers), with injured crucial players, and an exhausting international for others. In case of a setback, even if the team have some excuses, I feel it won’t hurt less if we don’t get the result we need.

Hopefully we go there and setup not to lose.
I’d go with this.
Cech
Mustafi Koscielny
Coquelin. Monreal
Xhaka Elneny
Rambo Ozil Iwobi
Giroud
If medical staff think Alexis is safe to start I’d start him in place of Iwobi.

Would rather see Jenko at RB, coquelin hasn’t played there too much. Also we need Walcott to start, he has been one of our best players this season and can provide crosses to Giroud.

Psychologically I feel Wenger as to beat Mourinho to win the league for his confidence and the confidence of the team.

Leicester won last year because of the ”belief” that its their year… its what gets you over the line..

If Wenger can do one over Mourinho today..he can have a new contract!..

(Ps to me that equates to winning the league)

I hate Mourinho, actually hate him – but who (here) doesn’t?

His current beef with the media is other-worldy. Is he really that stupid? Can he seriously not remember when the (admittedly) despicable UK press fawned and heaped praise all over him while pissing and shitting all over Wenger? And the 18months/18 years comment? I hate him.

Let’s get this win out of the way and do our part to send him on his (next) inevitable downward spiral.

Hopefully we go in with the mentality of wanting to put right our one away PL defeat in 2016.
If we do I expect us to win. Sure, we have a couple of key players out but they have more injuries especially at the back and in the end we are simply better than them right now. Get it done lads, I have faith !

10 long years since we have won in the league at old toilet. Every time we play them at that place, we just seem to freeze and wish I knew why. So many times I have been left feeling so pissed off and let down. Please make this year different, but I just don’t feel confident at all. One day, perhaps today is the day it all changes? COYG please

I just want the team to turn up at old toilet and do themselves justice for once. Yes, for Wenger and for the fans, but mostly for themselves, because they are the better team dammit. Definitely one to watch from behind the sofa..

In the end, this is one of the matches where tactics will not really matter. It is of how p psychologically determined to win the league that will count.

The forces of good against evil, Kanobe v Vader, Professor v interpreter but we need a nasty smash your face in kind of performance. Unleash the inner Keown boys & send that sardine munching tosspot back to hell or Stoke whichever’s quickest?

Winning for me today can only be surpassed by us winning the league this season. It’ll mean the world to me if we got victory today. Lord Jesus pls favour Arsenal and give us victory today.

If we play the match and not the occasion we’ll win. I’m actually glad this one is early, so we don’t have too much weekend for nerves to kick in. The players are inclined to try too hard and lose their rhythm, if they play like they did against Chelsea we’ll win this, fuck history, it’s today that counts.

Iwobi must change his “too nice” face expression, . He must look at opponents defenders like a crazy dog!!

Iwobi must score! He has bungled his goalscoring efforts in front of goal too many times. Score one and the confidence will come. I believe in him.