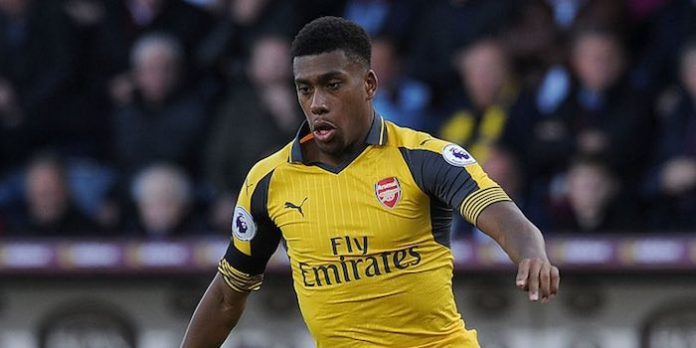 Nigeria coach Gernot Rohr says that Arsene Wenger told him there was much more to come from Alex Iwobi than we’ve seen already.

The 20 year old has been a breakthrough star in the last 12 months, and showed his skills last week with an audacious flick (although the whistle had gone just before).

Speaking to local press, Rohr said of the piece of skill, “I didn’t see it coming but I wasn’t surprised he did it. When I met Arsene Wenger last month, we talked about Iwobi and he told me there’s more to his game than what we are seeing at the moment.

“He is a confident lad. He is not afraid to try new tricks in training and games. He can only get better, his best is yet to come.”

How timely it would be if he could produce something like that when we face Man Utd at Old Trafford on Saturday. Arsene Wenger is waiting anxiously on Alexis Sanchez, due to play tonight for Chile against Uruguay, so Iwobi could become even more important should we lose him to injury/fatigue.

Story from Vanguard via SportWitness

He’s a kid holding down a place in a top PL team (the top I would argue). Hence he is already doing fantastic.

Looking forward to his prime years at 25 to 30 years old!

He’s become really important to our system in such a short space of time, which is worrying because there isn’t another wide left playmaker behind him. The sky’s the limit for this kid but his performances have dipped and at his age a few bench cameos may be a good thing for him, but unfortunately nobody replaces him unless we move Özil left and Ramsey at 10 which would directly effect this new goalscoring role taken on my Mesut.

I think Sanchez might be able to do a job there.

Sanchez performs a different role to Iwobi on the left, and besides, in this system he plays up front.

Perez can play on the left as well… So I agree maybe bench him for a few when Perez is back let them two push each other for that starting place.. a little competition will do wonders for him and help feed that hunger

I think Ramsay would do a good job there.

We fans disown our players in a second and put them on our head in very next second.

Iwobi has done very well for the team this year, and he is basically irreplaceable despite his obvious lack of experience. He is quite remarkable.

I too am not so surprised; when you share same gene pool as Jay Jay Okocha then its quite easy to comprehend!

Trust him. He also said Thierry Henry would be world class. And he said we’d not seen the best of Özil at RM. And Alexis/Hector at Barcelona, Koscielny in ligue 2 etc. I could go on but Arsene Wenger will go down in history as one of the best at spotting potential star footballers early in their careers.

well, i hope he keeps a level head & avoid serious injuries, we all know Arsene is best to unearth his potentials

Mourinwhore;” hey Fellaini , rake your studs down the back of that Iwobi bloke”
Fellaini ; “ug ug ug ug ug”

Except it will have to be Rooney doing that on the weekend because Fellaini is out injured.

He’s getting there. Needs to add more end product to his game.

has Iwobi taken over the Diaby chant?