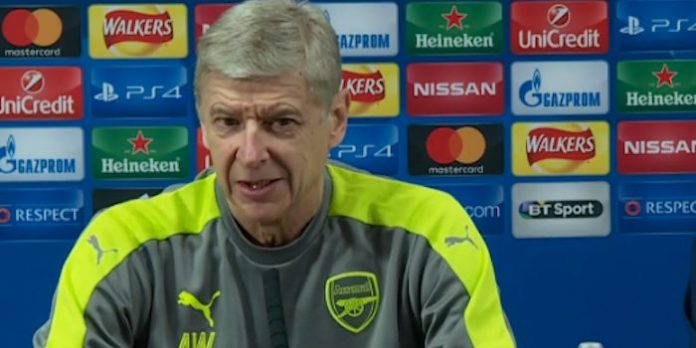 Arsene Wenger was asked about Santi Cazorla at his press conference today, with some uncertainty over the timeframe regarding the Spaniard’s return.

He’s been sidelined since October with an Achilles problem, and although the manager said he wasn’t overly concerned he’d be out for a prolonged period, he admitted he still doesn’t know when the 31 year old will be back in action.

There were reports that he’d been sent to Spain to see a specialist to help solve the problem, but the Arsenal manager was not particularly forthcoming about that.

“At the moment I’ve given up on that,” he said. “I don’t know how far he is. He looks to me that he’s making progress, but as long as the player is not in full time training you can’t set targets.

“It’s not a big injury, it’s not one that will harm his future, it’s an inflammation at the back of his Achilles. And with inflammation it’s always hard to tell.”

Pressed further on a time-scale, he continued, “My gut feelings is two weeks, but after two weeks it takes another two weeks of training to get back to full fitness.”

Maybe he means 2 weeks before the end of the season. I surely hope not though, i seriously miss watching Santi play!

With Santi out then for basically an ‘unknown’ period of time surely this means we will see more of Xhaka in that role? or is this potentially an opportunity for Ramsey to cement his place in the team?.. either way Santi will be sorely missed by Ozil and our back four.

Oh ffs! Santi can have my Achilles I am not using it anyway.

Does this happen other clubs? Do we just miss it because we don’t pay as much attention? Because each year it feels more and more as if we are doing something fundamentally wrong. (Other than Wenger’s insistence on allowing the player to decide whether he continues or not and i’m sorry but that is a fact and has led to some seriously long term injuries eg Cazorla finishing a game with ligament damage last year)

I think it may have something to do with the pitch- about the Emirates having a different type of grass compared to other pitches, which in turn induces more stress on the body.

Could well be something as innocuous as that but at some point it isnt just bad luck. Anyway i have made the mistake of saying anything other than arsenal are amazing at everything. i apologise.

No, I think you got voted down because the example you used was false. Wenger couldn’t bring Cazorla off in the game you mentioned because he had used all of his subs.

Id take 10 men for 20 mins over risking ligament damage, anyway it has happened countless times especially with Wilshere and Ramsey. Im not part of the wenger out brigade, i just find it ridiculous that i have heard him say ‘he said he was ok to continue’ a dozen times. It shouldn’t happen.

We need him by the time we play City in December. Need to win that 6 pointer.

Gutted he will miss the xmas games but if we can have a fully fit Santi back by mid January I’ll be very happy . If tho ……

Thanks for clearing that up. Did the reporter clarify whether it was a standard 2 weeks or an ‘Arsenal 2 weeks’??

Whenever he comes back makes it exactly 2 weeks.

All that investment in medical staff and equipment and all the gaffer can give us is”gut feeling”?

God will help my man to recover in time. I miss him so much.

I think his career as a top-flight footballer is over. At his age, Achilles dogs you till you put your hands up. He might get the odd 2 to 3 weeks but it will reoccur. It’s not for nothing that endless problems are dubbed Achilles heels.

Think they’re called that because of the siege of Troy legend, not anything medical…

Amadi, you might want to Google “Achilles heel” and get yourself an education.

Of course. The little I know, the great Achilles’ heel led to his downfall. When a problem is perceived to be little, but ultimately leads to the downfall of a supposedly invulnerable man. That’s the legend. Or isn’t it?

I can understand us all getting emotional, and defiant, on the subject of Santi’s Achilles. Please ask any practitioner in sports medicine the implications of an Achilles heel injury for 32 year old professional athlete.

There was a rumour going around at the start of the season that his Achilles is a severe issue. I cant remember where I saw it but it was stated he wouldnt make more than 15 appearances in the league this year. I hope its not true but the signs are suggesting otherwise

January is going to have 3 LANS.

I can read Arsene’s scripts already.

Get well soon Santi, I don’t think it’s coincidence our team performances are rather poor without him in the squad..

Well that’s our January transfer window sorted out then : a defender, a midfielder and 2 strikers