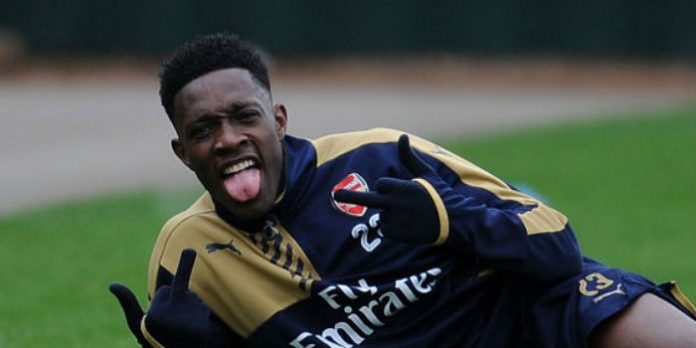 Arsene Wenger says Danny Welbeck is a week away from joining full training.

The England international has been sidelined since May when he suffered significant cartilage damage in his right knee during the 2-2 draw with Manchester City and required surgery.

Welbeck’s current problem came just four months after his recovery from cruciate knee ligament damage in his left knee which had ruled him out for ten months until February.

Speaking ahead of Arsenal’s latest trip to the Etihad, Wenger revealed: “Danny Welbeck is one week away from completing normal training to be back in the squad. Of course, that will take some time as he’s not played for a long, long time.”

Arsenal’s under-23 side have three fixtures in January against Derby (6th), Southampton (16th) and Chelsea (27th). It’s possible Welbeck will feature in at least one of those games.

A nice early pressie for us all

Welbeck back in training in a week – what great news!
That sets him up perfectly to return to the side in February and score an injury-time winner against direct title competitors on Feb 4th…

Or against a direct 4th place rival

Are you saying boooo, or Welboooeck?

I w as saying welbooek.

This is the best photo

Yes! where is it from?

Welcome back that guy

return of Wele will increase the quality of the wing play

Welbeck knocked United out of the FA cup, which we went on to win.
Just wanted to remind you all.
Have a good day.

And he celebrated the goal at Old Trafford, none of that “hands in the air, look at me not celebrate” shit. What a great moment.

I didn’t particularly like the blue strip we wore that day, but it reminds me so much of that goal that I had to buy it.

So many options up front for Wenger. Must feel like being in a candy shop.

Please don’t follow Diaby footsteps. No. I’m serious.i wish him to come back with a bang, score some crucial goals and maybe pick up a title or so

Blog why not introduce welbz with a cameo on the fa cup game preston away? I think its on 7th of January.

Probably still a bit too soon for him to start, but possibly a spot on the bench.

Lovely, really felt for him in the City game, absolutely rotten luck. I’ve really come to appreciate what he offers us, excellent link up play and ability to run the ball. I really hope he can add more goals, as that is what he will be judged on ultimately

Always loved dat guy’s attitude on the pitch, even when he was playing for that club of skunks up north. Now if only they’d part with martial… Wenger could make him a real player too, not wasted on the bench.