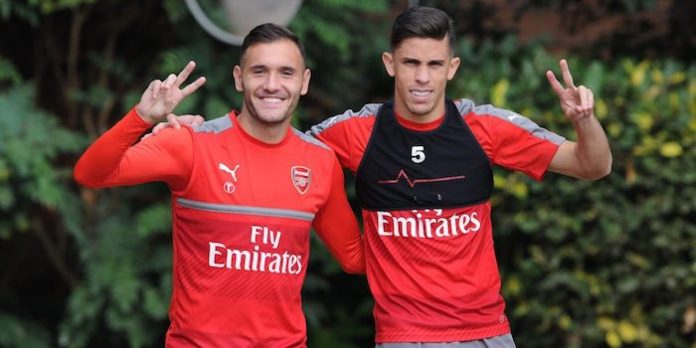 Arsene Wenger says he’s not worried about the fact Gabriel Paulista and Lucas Perez appeared to clash at the end of yesterday’s 1-0 win over West Brom.

The Brazilian seemed to take umbrage at the former Deportivo man’s reluctance to track back late in the game, and the duo were in heated discussion going down the tunnel after the game.

Kicked off big time between Gabriel and Lucas at the end. Gabriel furious with Perez for not tracking back. Carried on into tunnel.

Asked about it afterwards, the Arsenal manager didn’t seem overly concerned, saying, “No. I don’t know what it is about, I didn’t see it as well.

But they have the South American temper, you know, and that can sometimes happen. I don’t think that anything bad happened.

“They are two good friends, very close to each other so that is already forgotten now.”

It’s no bad thing really, strong words are often exchanged on the pitch and to have a player who is willing to take a teammate to task for what he deems to be a dereliction of duty is perhaps something we’ve been missing.

Storm in a teacup stuff though, and they probably went out for a traditional South American dish of sausage, egg and chips, confusing to the Spaniard, but there you go.

Communication is surely a good thing no?

So when Wenger says most good strikers are South Americans, he includes Spain.

Everyone needs a kick up the arse sometimes. Remember BFG giving Ozil a bollocking on the pitch after the Man City away loss a few years back.

Not sure what the fuss is to be honest.

I think thats a very good thing. Its exactly what we need sometimes.

I would like to see Lucas play more on the right wing but maybe that’s why Arsene doesn’t play him because he doesn’t track back…maybe?

Maybe now he will.

I noticed too – I think it was WBA’s last attack (obviously at 1-0). Perez was running back after the ball while WBA were attacking and then slowed down for no obvious reason. He deserved a bollocking.

Yeah was furious myself too, he was fresh and could easily have made an effort to stop the player. Thought he tracked back well in the Basel match though.

And to make it worse, it was an errant Lucas pass which started that WBA counter! Always feel like a player should assume an extra level of responsibility for regaining possession when they’re the one who gives away the ball.

I saw that too! Just imagine if that had been Ozil! The guillotine would be out!

Play him as a 9 where he won’t need to track back, just score goals. We’re we planning to play Vardy on the flank?

Also saw Gabriel ‘telling’ Bellerin to go out and close down West Brom player on Bellerin’s flank. Which was nice.

Agree, this to me is what they mean by ‘communication’ in football.

It’s not all polite.. can you imagine Gabriel going.

“Lucas old chap, how are you?.. good.. I don’t wish to intrude, but would you mind awfully if the next time one of those bleeders in white and blue run with the football, that you might give him the old ‘heave ‘ho’ and land him on his bloody arse like a Jolly good chap.”

Noticed that as well a couple of times Lucas let Nyom ran past him after a half hearted attempt to win the ball. Probably he didn’t know how much defending he should do in England coming in from the league that doesn’t know how to defend.

I’m happy to see this. It shows that the players care and are not going to suffer other players stepping out of line. A bit authoritarian sounding but we all know that it’s an aspect that has been found wanting on several occasions in the past decade.

Total non-story that no doubt desperate journalists will try to bleed for all its worth like the leeches they are. Players need to keep each other on their toes, maybe the pair of them should have been smarter and saved it for the privacy of the dressing room but there’s absolutely nothing wrong or even unusual about this.

Favela rules dictate the price of not tracking back being a toe nail..
Good to see Gab sounding out people… him putting slide tackles and Per collecting fines is exactly how the fight for places should be..

I remember when Flamini and ozil had a big bust up on the pitch, now look at them.

Gabriel is a good defender, but he can be too slow to commit to challenges at times, allowing opposing dribblers to advance too much with the ball. Seen it on too many occasions, even against slower attacking players like Rondon last night. Sort this out and Gabriel can be a much better defender with his never say die attitude!

I appreciate criticisms of Gabriel defending flaws. Here’s the thing though: he is the one guy I see who has that old school die for the team mentality (Sanchez is the other). He’s not soft. He doesn’t respect some pecking order of reputation or wages. He’ll say it when it is needed, he doesn’t give a f**k. Have you seen him ready to take on a mob of supporters from his own club cos they were being disrespectful? Look it up. We need a “hood muhfucca” (I mean that with utmost respect) like this in the team. Too many softies… Read more »

You know at first I was kinda offended how you lumped all South Americans to a certain “type”…then I thought that’s us South Americans do play dirty, loud, and a bit more abrasive than average. Carry on.

If anything i think we are lacking this kind ofshouting since the deference could be easyly conceding a goal, i think after scoring our players and mudfield become too asventures going up to score 2nd goal and it was not going to score like team goal it was individual players trying to get on the score sheet , nothing wrong going for a second goal but it was not only perez in the time after the goal till the end our defense was left alone and if it was better oposition we could easly concede. At one attack i even… Read more »

Gabie is all about get the ball and track all the time,he is as tough as nails, players who give everthing they have on the pitch would like other lazy players to wake up,it goes on all the time, players like Coquellin want others to do same,anyone who reads english media,pundits,the Neville,Shearers is a fool, these people are the pits,not good at most jobs, they get money from young players miseries,especially Arsenal,for some reasons they know that Arsenal will be nothing without Wenger, so they spend days and night talking about contracts, players, reminding the fans how bad Arsenal is,… Read more »

If it happened. That’s great. When managers try to make players accountable. It doesn’t always go good. But for another player to do it. Is great and does sometimes resonate better with the his fellow teammate. I’m sure if a similar situation arise. He would do better. We need the defenders to spur on the guys sometimes. The leaders on the pitch need to be a lot more vocal than they are.

Thought Gabriel did good yesterday. Like his speed covering and he has a bit more maturity to his play. Wenger has now option of both Gabriel and Mustafi to partner Koscielny. For the matter both can also cover Bellerin. Lucas was decent. Some good crosses intelligently put in but also a few miscues primarily because he hasn’t been regular. Again we now have options up top with Giroud, the returning Welbeck but also Alexis and Lucas. Think Lucas in all honesty may be best suited in and around the box in a predatorial role but in any case, late in… Read more »

I hope this doesn’t continue as Gabs may well shoot Lucas. We know what he’s like! 🙂

Agree with Gabriel…I watched Perez start tracking a player and then almost stop still as they approached the area…I was screaming at the screen!

The Iiage above –
Lucas ‘Hey peace and love! We are best mates.’
Gabriel ‘ You fail to track back again. My fingers go straight in your eyes.’