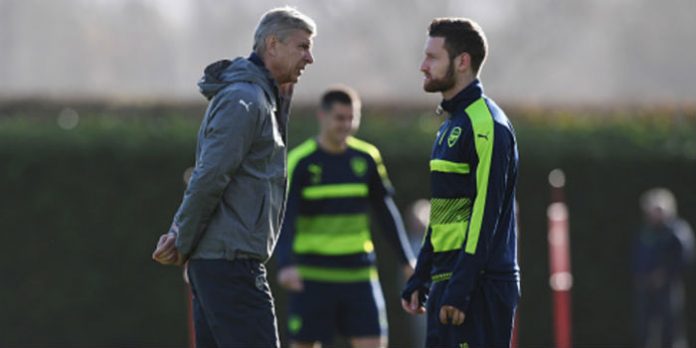 Arsene Wenger says Shkodran Mustafi’s absence at Everton is not a factor he has taken into account when analysing why Arsenal lost at Goodison Park.

The Germany international has become an integral part of the Gunners defence since joining from Valencia at the end of August and is yet to taste defeat in any of his 17 appearances. Without Mustafi, who picked up a hamstring problem against Stoke that has ruled him out for three weeks, Arsenal’s good run of form came to an end on Tuesday.

Asked whether the summer signing’s absence played a part in the 2-1 loss to Everton, Wenger told his pre-Manchester City press conference:

“In football when you lose a game, always the guys who are not there are the heroes.

“I believe that we have many big players who have not played many big games and we’ve still won.

“We have to look at the performances of the players on the pitch and we have to analyse as well, why did we lose this game from 1-0 in front.

“That’s where you have to be realistic and not cry too much about players who were not there.”

He added: “Look, I’m concerned about conceding two goals having been 1-0 up. We conceded two headers but overall we must say that it’s the second game we lost away from home in 2016 – our away record is quite very strong. One game should not be of too much concern. The disappointment is that we lost the game.”

On the subject of missing players, Wenger was also quizzed on Pep Guardiola losing Sergio Aguero for the Arsenal game after the Argentine was given a four-match ban for a red card picked up for a hilariously vicious challenge on Chelsea’s David Luiz.

The boss was at pains to point out that City aren’t the only team missing important squad members.

“Cazorla’s just had surgery, Ramsey is not there, we spoke about Welbeck, Mertesacker…we have plenty of people out. That’s part of it. I cannot feel too much sorry about that, it’s part of the season.”

You can’t feel sorry for a team missing a player when he’s only missing the game due to his own actions. I think I would have given Aguero more than 4 games for that tackle if it was down to me, worst I’ve seen in a long time.

I think we’ve got enough to get the 3 points on Sunday, fingers crossed!

The Gooner7
Reply to  Evang. Femi

The best striker in PL, before Alexis took that position.

Jay
Reply to  The Gooner7

For some reason I’m reminded of Bendtner

Is Aguero losing confidence? Whenever a big game is looming for them, he gets these red cards. Good for us because I must agree on a good day, he can win a game by his own.

Wenger was hiding the truth. It was obvious that Mustafis absence contributed to the loss against Everton. I know as the coach he has to give confidence to whomever he picked of course the team is his. Hope Mustafi make it back soon. Nothing short of a win tomorrow against City Chelsea appear to be running away with the title