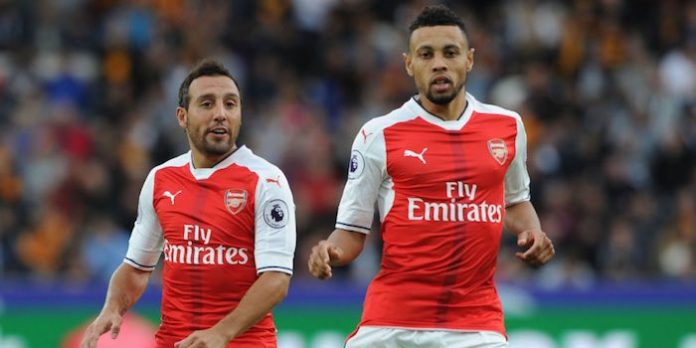 Arsene Wenger has given some insight into his thinking when it comes to balancing the Arsenal midfield without Santi Cazorla.

The Spaniard has been ruled out for up to three months as he prepares to undergo surgery to correct an ankle problem, and it leaves the Arsenal manager with something to consider when selecting his team.

He says that who he choose elsewhere has an effect on his decision making when it comes to the centre of midfield.

“You think about it in a global way,” he said, “and when you integrate more than two players, with Ozil you have to balance that.

“Sometimes I play Iwobi or Chamberlain so the combination has to be in the four or five.

“I consider Walcott and Alexis to be strikers, in their mind and the way they play. So around them you have to build a team that is balanced.”

And without Cazorla, there’s further thinking to do.

“When I play Santi most of the time I have Coquelin because he is a really defensive breaker of attacks,” he continued. He gives Santi more freedom.

“We are close with the balance as Xhaka in midfield is moving upwards. He has a different influence to Santi.

“Santi is more of a guy who gets out of very tight situations with a very short technique, right and left foot, while Xhaka has a pass and is not a dribbler.

“He passes through the lines.”

So that should make everything crystal clear, right? We’ll see later on which duo he selects to do the job against West Ham.

Coquelin loves playing with Cazorla as it makes him feel tall.

On the poll interesting that over 90% want Xhaka in the midfield.

As much as it pains me to admit, I think we have to start planning for life without Santi. When he comes back from surgery how many more good, and more importantly, full seasons can we get from him? To me Coquelin is a given. Who partners him is the question.

Have we ever played Ramsey and Coquelin together with any success?

I think every time Rambo has filled the hole with Coq it’s left us agape.

i dont think so. ramsey has never received a good run of games alongside coqueline. he has mostly played on wings , and when he got the chance to play in midfield last season when santi was injured he had to play wit suicidal flaminy. thats why i think we should atleast give him a run of games alongside coq. i know ramsey has been playing badly but we seriously need someone to step up other than sanchez . if ramsey somehow got anywhere close to his form he displayed in his one good season we will have a better… Read more »

Your a funny guy if somewhat deluded

As long it’s not Ramsey who clearly is not good enough to start for the Arsenal. Could be a useful sub.

…and I also find the result very interesting because when Ramsey had his best season so far (in 2013/14) he played just right where he could play now, in the absence of Santi.

…don’t know what the fuss is all about

are u mocking thy lord

Only way to replace Santi properly ;__;

I would have fancied me a Whilshere & Xhaka Combo

I think Wilshere and Coquelin will be the best duo as an eventual long term pairing once Santi is no longer available. Jack plays more like Santi than any of our other midfielders so would be the nearest thing we could get to Santi/Coq.

Wenger should have just refused the Wilshere loan deal as far as I am concerned. Cazorla getting injured was almost inevitable I’m afraid, Jack would had a way in and chose the easy option to off on loan. Why do people give Debuchy shit and not Wilshere, they both wanted the same thing.

Theoretically, Xhaka is the one who can find Oil and also ping passes to Iwobi, Ox, Theo or Alexis in the event of a counter attack. Coquelin is the one who is going to steal the ball.

Okay, I think it’s about time we all gave the “if Wilshire was here” card a rest.

It’s not like he’s pulling up trees at bornemouth. He’s still trying to get his groove back. Personally I believe if he was with us the pressure to play on Santi’s level will be too much currently and will get bashed by unrealistic fans if he had any poor game.

On the other hand, at bornemouth even when he didn’t play particularly well it was largely overlooked. Which is kind of good as he shouldn’t be expected to be at his best currently.

I went for Coq & Xhaka. Have the Coq sit a touch deep in around the midfield line and let Granit roam. I think he’d be effective in that role with Ozil pushing in to that cf position we’ve seen and with Alexis creating space off the ball. 2 nil up and bring on El Neny for Xhaka and Sir on the counter 😉

Sit* on the counter