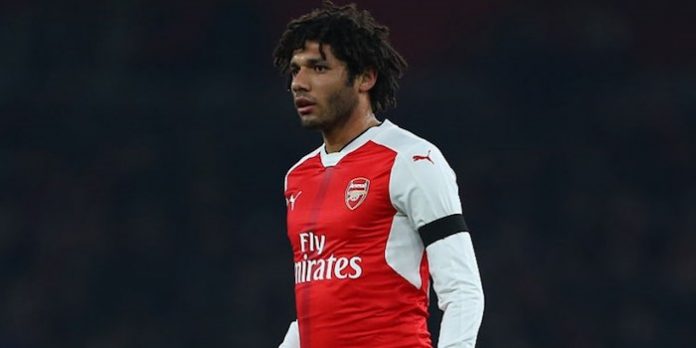 Mohamed Elneny has revealed that he loves life at Arsenal so much that even when he takes a holiday he misses the dressing room camaraderie.

It’s just over a year since the 24-year-old joined the Gunners from Basel in a deal worth just over £7 million. The Egypt international has since made 36 appearances in the centre of the park, adapting his game to partner with Santi Cazorla, Francis Coquelin, Aaron Ramsey and Granit Xhaka.

Speaking to the Daily Mail in Gabon, where’s he’s currently representing his country at the African Cup of Nations, Elneny spoke with pride about his progression in London and the way he’s been made to feel part of the Arsenal family.

“It’s been a great year for me,” he says. “Playing in England, at one of the best five clubs in the world.

“Since I arrived, I’ve enjoyed the whole experience. Not just playing for the club, but the country itself. The friends I’m making, the supporters. The whole atmosphere around the football. It’s been one of the best years of my life.

“In Basel I gained experience. But when I came to England, and Arsenal, I adapted so quickly because I felt straight away it was like a family, a whole big family. You are someone new, but they embrace you. They bring you in.

“Everyone loves each other. When you feel like people love you, and they want you around, that makes you adapt quickly, you enjoy being there.

“That’s why when I leave, even on holiday or with Egypt, I miss it.”

Elneny’s Egypt face Ghana on Wednesday knowing a draw will be good enough to seal safe passage to the quarter-finals in Gabon. Should they lose and Mali beat Uganda, he could return in time for Arsenal’s FA Cup fourth round clash with Southampton on Saturday evening – we could certainly do with him given the suspension to Granit Xhaka.

You can read the rest of the interview in the Mail, here. Yes, linking to it does make us feel dirty.

One big family but who’s the mummy?

has to be Santi. He just looks so loving and nurturing with those beautiful eyes 🙂

The most consistent player in possession we have in midfield after Santi.

I really like him. Seems to do a bit of every thing. Works harder than anyone else. Never complains and seems grateful to be there.

Miss you too Mo. This guy has cult status written all over him. Bit of a Ray Parlour in the way that he’s less glamorous than his team mates but could end up being no less effective.

I miss Ray Parlour. His FA Cup goal against Chelsea is still my favourite Arsenal moment.

I like this geezer. He’s been quality a quality signing.

I didn’t know him before he came in,but I gotta say I love that guy. Always looks positive. Runs around like crazy when he comes on for the last ten minutes. Hope he gets more space!

Quality attitude this lad. Can only keep getting better.

Egypt failing to progress? Uganda be kidding me!

if they still had Mido and Ghaily and that so*rs DNA maybe. now they have El Neny so Mo games for them.

This guy is great, he would be greater if he tackled more. He’d be a pacy Coquelin!

Definitely one of Wenger’s best buys, can’t believe how little we had to pay for him. May not be the top choice for one of the DM positions, but certainly can come in and perform whenever needed. Really like his game, disciplined (unlike Coquelin and Xhaka), very active and always available for the ball, is positive with the ball with few turnovers and works his tail off.

Reminds me of Edu. Cracking player, never feel anxious about him

In case anyone was wondering.

No Plymouth Argyle? For shame!

“One of the best five clubs in the world”
YaGunnersYa

What’s this nonsense about “one of the best five clubs in the world”?
The Arsenal is the greatest club the world has ever seen!

Shall i draw you a Venn diagram?

He could (in the near future) be our best alround midfielder; he certainly is our most consistent, and imho, grossly underrated. I look forward to a speedy return Elneny.

Am I the only one who sees him as a direct replacement for Diaby?

The brush in the caretakers cupboard is a direct replacement for Diaby, God rest his knees.

I loved that guy.

hahahaha this made me snort at work just now…

Diaby was of a skills player, rather like Pogba – an individual genius who could turn a game.

I’d personally like to see Elneny become more authoritative, make riskier game-winning passes, hit more long range goals and own the midfield more in the physical sense. But I’m a huge fan of his movement, energy and consistency.

King of everything south of Zamunda
Reply to  Savage

The through pass to Ozil against Ludogurets was surely a game winning pass? That pass alone put us into the third round of the champions league….

Yet you have some people who thought Flamini was a better player. Think it’s now obvious how crucial he is to the team…he can play alongside all our midfielders (even Ramsey). He can get better. Needs to bulk up a bit and be more aggressive in the tackle (not Xhaka level craziness)

I like this guy..good range of passing,good composure,displined,always backs the team and the boys(no matter how little game time he gets)..jus needs a bit more confidence..I’d like to see him take long range shots,we’ve seen him do it before at Basel n a bit more tenacity when it comes to tackling..but all in all,money well spent Wenger!

Love the guy. Reminds me of Gilberto

That is bloody lovely. What a gem.

Top top player in my opinion.

I really can’t believe the cheek on this guy. He doesn’t play for one of the top 5, He plays for best club in the world. He needs to shut up and focus on making babies so he can name them laresna and erlasan.
Also needs a tattoo of the cannon across his heart, and a custom license plate that reads T0P GNNR.

NO CLASS, NO DESIRE, NO LOYALTY.

Elneny strikes me as a really decent, humble person. If you read about his early years in the game (youth level in egypt), and the sacrifices he and his family had to make for his now career, it almost reads like a movie- and I’m glad he’s able to play at the highest level for club and country. Long may it continue.

I think he is one of our most humble players, a real nice chap, my only concern is his physical presence, i think he needs to bulk up for this league. He very much reminds me of a Gilberto Silva the same humble hard working personality, i think he will become one of our long serving players

Weird mop on your head Mo but it’s obvious you are a consummate professional. We miss you too