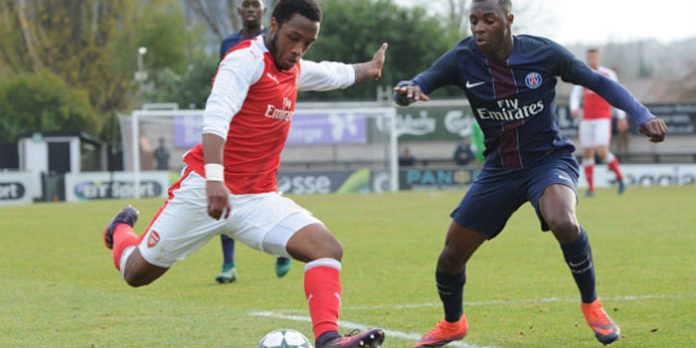 Arsenal have confirmed that young striker Kaylen Hinds will spend the second half of the season on loan with Stevenage Town after penning a new deal at the club.

The England under-18 international is the eleventh member of the Gunners Academy to move on loan this season.

Earlier today it was confirmed that Ismael Bennacer has moved to Tours in France, while Gedion Zelalem has joined up with VVV-Venlo. The USA youth international joins Tafari Moore (Utrecht), Dan Crowley (Go Ahead Eagles), Stefan O’Connor and Kelechi Nwakali (both MVV Maastricht) in Holland.

Jon Toral started his season with Granada but is now at Rangers, Julio Plegueuelo is at Majorca, Glen Kamara is, for the time being at least, on the books at Colchester and Ryan Huddart is with Eastleigh.

Best of luck to young Hinds, we imagine he’ll be full of beans after the latest developments.

Mother and Agent to the player, Chrissie, commented on the move to Stevenage that “he’s gone 2,000 miles, its very far”

“Full of beans”, good one Blogs!

Hands up who else forgot about Joel Campbell?

I’m pretty sure Kamaras loan has been terminated. He was on trial somewhere else in the last week or so, but I can’t remember where….