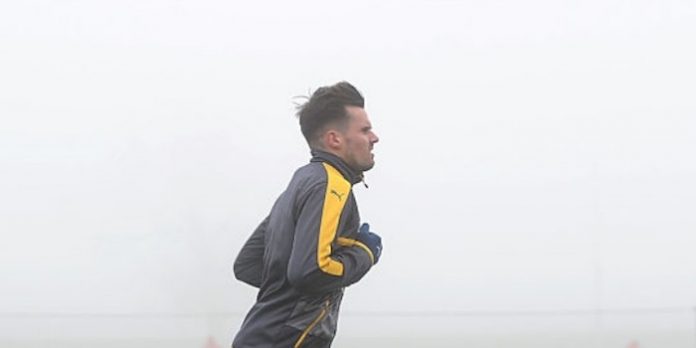 According to The Mirror, Crystal Palace are working to sign Carl Jenkinson on a permanent basis this month.

Indeed, the report suggests they’re trying to make it happen ASAP so that the 24 year old can play in the Premier League this weekend.

The Eagles face West Ham – a club that Jenkinson was loaned to twice, and current Palace boss Sam Allardyce is the one that brought him there in 2014 so knows him well.

Jenkinson had been strongly linked with a move to Hull City, but this was before Mike Phelan was sacked and replaced by Portuguese Marco Silva.

Having fallen down the pecking order at Arsenal, it seems a move away is inevitable now for the lifelong Arsenal fan.

More as it happens.

Would much prefer a loan, with a transfer at the end of the season if he isn’t looking up to scratch then.

Love that he is a Gooner, would love it if he could make it for us on the pitch.

I wonder if this has anything to do with Niles’ impressive performances. I think it’s easier to slot Niles in than Jenko as he’s more similar to bellerin. Kinda like the team playing with Sanchez as a striker vs playing Giroud there. You can’t just slot one of them in and hope it works out, it’s a completely different game plan. Either way, I’m gutted to see it not work out for Jenko, every fan would have loved to see him succeed as he’s one of us. I wish him all the best in the future, regardless of who he… Read more »

I agree. Was very hopeful that he would be both willing and able to stay with his Arsenal to back up and fill in during Hectors brilliant career. Will also miss his father performing the vocals to the Champions League Anthem at home games

It’s probably good for Jenkison’s career given the meteoric rise of Bellerin. Big risk for Arsenal though having no back up. Have to assume Holding or Gabriel will be asked to do a job.

Let’s start looking around car factories for a right back.

Gabriel did pretty alright at RB, and as backup CB and RB he’ll probably get enough games to keep him match-fit also. Might even pave the way for some Holding-cameos at CB, which would be a really good idea.

Yeah we have Gabriel, Holding and Niles as cover for that position, with having Mustafi and Coquelin who can play there. I’m not too concerned about that position. Hopefully next season Niles would have had enough games that he would be in a position to fight for that position.

He’s one of the only youngsters that always impressed in his loan spells and is very highly rated by every manager he played for. I think there might be something special in this kid.

All of those players can play RB yes but are not natural there. Imo we have to have at least two real RB’s if we want to win something this season, otherwise we are doomed if bellerin gets injured. It is one thing to able “to do a job” as RB than actually play well against a top team.

I completely agree, but it’s going to be really difficult to get the player you want in January. I think for the remainder of the season we should rotate according to who we are playing. Yes Sanchez should start most games up top, but when we play teams that just park the bus with no intentions on winning the game then it would be best if Sanchez played on the wing and Giroud up top. The same applies for the RB position. I think when we face really physical teams then it may be best to play Gabriel at RB.… Read more »

I completely forgot about Debuchy, what happened to him? I think if we can get him focused then he would be the best option for backup for the remainder of the season.

If he’s gonna keep bitching and can’t fight for his place then we might as well sell him. I just don’t see Wenger selling/loaning Jenkinson and Debuchy this window without having someone lined up to replace him. He must have seen something in training in one of our other players that makes him confident they can provide the necessary backup.

Yeah agree that Debuchy is an option. I think we should keep him wanted he or not (he has a contract here ffs) as a solid back up and let him leave in the summer if he wants to. Any ideas of when he will be available again?

On limited evidence, right now we have to say that Mustafi+Gabriel<Holding + Gabriel at CB.

Heart and spirit of a Gunner, will always be a gooner and a really nice lad. He should go to West Ham but Crystal Palace will suit him too. Good luck Carl Jenkinson.

Corporal Jenks is a hard worker, but may not be up to snuff for a Champions League squad. Nonetheless, he puts in a shift every time he’s on the pitch.

Good luck to him wherever he winds up, and especially if he stays!

Young Ainsley isn’t up to the level of European football either. McGeady gave him a torrid time in the FA Cup.

I would like to see the Corporal stay on Arsenal books till he retires, even if that means every year we loan him to another team. His contract stating that Arsenal will pay him his market worth i.e. however much a team is willing to pay him on loan. Maybe one day, he will blossom into the right back, we all know and want him to be, one that locks down / challenges for the RB position.

I agree, but maybe it’s best for his career to move on and start somewhere fresh where he knows he has a chance to fight for his place. Sad to see him go, and I wish him all the best.

It would be a shame for Jenks to leave. Maybe we should wait until the end of the season before we sell him. A couple of months loan might help him recover his confidence.

A real shame this, a player that I like a lot but, to paraphrase from Wenger, “maybe lacks a little bit quality”. Don’t think he’s nearly as bad as some people on here make him out to be, but still maybe not good enough either. If he does go I wish him the best of luck!

if he does go, i hope the club let him stroll through The Armoury and take as much merchandise as he wants.

I think he deserves some likeness of him left behind, rather than outsourced merchandise. Perhaps courtesy of the Arsenal fas, whom loved him the most

He can still have a career at Arsenal. We need to remember he just came back from a long long injury, is not playing regularly at all so is bound to be rusty. Chambers won’t be a RB moving forward so let Jenks have a loan, sign him to a new 1/2 year extension, get some games with Palace, have a proper pre-season with us and be our back up to Bellerin next season.

We should just loan him out, then recalled him back just like Le Coq

I wonder what is really going on with Corp. Jenkinson behind the scenes, because he doesn’t appear to be a bad footballer by any stretch. I don’t mean to suggest I suspect he has a personal issue holding him back, but I just mean, what has been said at the training ground about his footballing deficiencies? He has had some rough bits in his last matches, but y’know, Ox still gets a game regularly. I guess it could be as simple as “Bellerin’s the club’s first choice right back, and barring serious injury it doesn’t look like Jenkinson will ever… Read more »

Good luck Carl. Bad luck with injuries but he was given a chance thus season when Hector went down. Unfortunately he didn’t grasp the opportunity. Gabriel backing up Hector is fine.