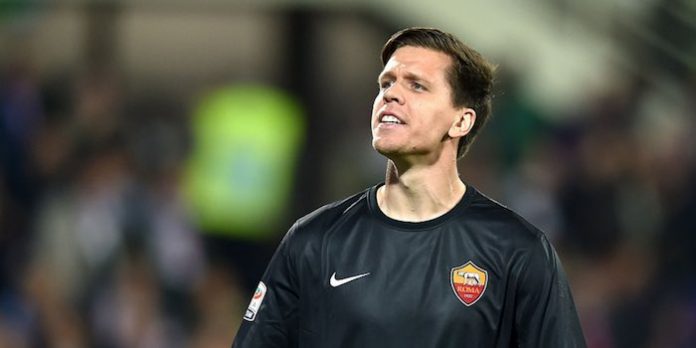 Wojciech Szczesny says his Arsenal future is in Arsene Wenger’s hands as speculation mounts that Roma could make the Pole’s loan switch permanent at the end of the season.

The 24-year-old, who is out of contract at the Emirates next summer, has been linked with a €16 million move, however, the keeper has been quick to make clear that the Serie A giants do not have a buyout clause as part of their current agreement.

“I owe a lot to [coach Luciano] Spalletti, he has made me feel his confidence,” Szczesny told Sky Sports Italia.

“I worked well with [former coach Rudi] Garcia, but Spalletti has improved us even further. When a player feels a relationship with the coach it makes things better.

“My future is in the hands of Arsene Wenger, I’m curious myself. I’ve been in his hands since I started my career as a 16-year-old.

“In my contract these are no terms of purchase for Roma. I’m happy however that two clubs like Arsenal and Roma fight over me.”

Szczesny fell out of favour at the Emirates in the second half of the 2014/15 season after being disciplined for smoking in the away changing rooms after a defeat against Southampton. He fell further down the pecking when Petr Cech was signed from Chelsea.

Mkhitaryan tells Arsenal to do deal with Roma

Have to think it’s worth us hanging onto him because from all reports he’s a much improved player and with Cech not impressing at the moment there’s room for him.

Nice article! Just on remark: his age is 26.

Keep up the good work 🙂

I’ve always liked him, his father was a keeper, tall, athletic and loves Arsenal while laughing at Tottenham. Best keeper in Italy I gather.

Just coming into his prime years as a keeper so careful thinking to be done.

Best in Italy? Buffon, donnaruma and Handanovic will disagree.

On the other hand, i like him more than Cech now….so…

I agree, he’s still so young for a keeper and you couldn’t not learn a lot in Italy. Even Hart seems less erratic.

Im sorry though, Arsenal site or no, I have too much man love not to point out that Buffon is still a cut above.

Agreed Buffon is a great keeper.

Here is this season:
http://www.foxsports.com/soccer/stats?competition=3&season=20160&category=GOALKEEPING

Took a while to type/make the page up, but for someone as gorgeous as my Szcz…

Dare I say, Roma and Arsenal are very similar teams. Always get cut short of the top position in the league.

Actually, not at all.
Roma and Spura are very similar clubs, pouring lot od cash into transfer market each season only to fall behind.
In terms of philosophy of running the club in a self-sustaining way it would be Lazio.

Think he’s 26 not 24 though another couple of years to develop further would be nice.

Bring him home. He’s definitely improved since he fell out of favour and is actually a fine keeper. Before he fell out of favour, he shared the golden glove with Cech, and was very assured between the sticks for us. His father didn’t actually help matters with his public comments – all of which were shot down by Wojciech himself. Cech isn’t getting any younger, Ospina is great. Though it remains to be seen if he will stay on this summer or if he will push for a #1 spot elsewhere if he isn’t given assurances of that with us.… Read more »

Even with all the sympathies for Ospina I still think Szczesny is a better option. He was better even when he left on loan but have not had his head sorted out at that time.
I too think that a class goalkeeper needs to be a bit mental ?

Kwame Ampadu Down
Reply to  AFL

I agree.I like Ospina but I can’t see him ever as a no.1 at a really big club. Time to get Chesney back & tell him the no.1 spot is up for grabs.

Bring him back to compete.
No offence but it’s not like Cech has been amazing. Some of the saves he’s pulled off at Roma have been unbelieabable, and they’ve improved his distribution too.

He’s a very good keeper and home grown too. Cech isn’t getting any younger. Ideally I’d like Szcz’s long term future to be with us.

could there be a cunning plan Arsène has devised to sell Ospina in the summer for some good cash and let Ptr Čch and Wjcch Szczsn battle it out? It sounds like a good pairing, up and coming against old and going. No disrespect to any of them, but that’s how I would like to think of it.

I don’t think there is too much between Ospina and Szczesny. One of them will probably leave at the end of the season. I’d keep Szczesny over Ospina because I feel he gives us better protection when dealing with crosses and corners.

Szczesny was loaned out after he had a horrible season for us when he made mistake after mistake and eventually went into total meltdown at Southampton after playing like an idiot. He wasn’t sent away because he was having a fag in the showers, he was sent away because he was erratic and awful. Ospina had to step in and did so admirably, and basically saved our arses, but it seems none of that matters because Szczesny sings silly songs about the bunch down the road, so he must be marvellous. I never want to see Szczesny back because I… Read more »