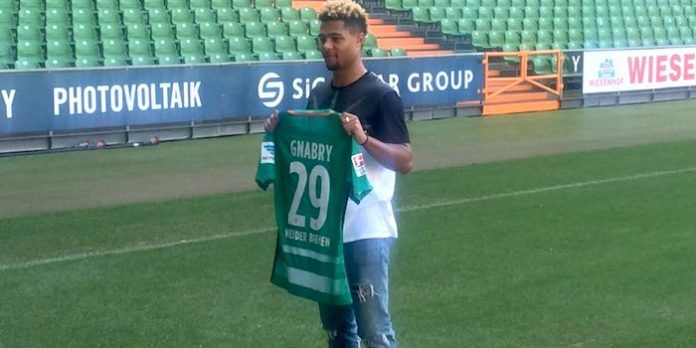 Over the last couple of days there have been stories linking Serge Gnabry with a move back to Arsenal.

The German left this summer after four seasons with the club to join Werder Bremen. The move came late in the transfer window, and at the time there were suggestions that Bayern Munich – transfer schemers par excellence – had a hand in the deal after initially being linked with him themselves.

Arsenal were keen to keep him and offered new terms, but he decided to leave for the Bundesliga.

Asked today at his press conference if there was any truth to the stories about bringing him back, the Arsenal manager said, “No. We have sold Serge Gnabry to Bremen.

“At the time it looked like Bayern Munich were behind it. I don’t really know. But at the moment no, we do not re-sign him.”

It will be interesting to see what happens with the 21 year old, who has scored 7 goals for Bremen this season in the Bundesliga, as well as a hat-trick for Germany in an 8-0 win over San Marino.

There was certainly no option clause mentioned, but it wouldn’t be at all surprising if there was a sell-on clause involved.

Big shame, think he can be a big player. Will be fascinating to see if he ends up at Bayern, dodgy if so.

Well if he wanted rid so much. Then good riddance. We dont need shit like that disrupting an otherwise stable squad.

Nice way to deflect away from the fact we lost what appeared to be a world class player in the making. Wrong loan moves, not enough Emirates game time, lack of faith from Wenger. Looks like Zelalem is heading that way too, as is Dan Crowley.

ARE YOU MAD? He broke in 2014, and got repeatedly injured. If someone can’t break into the Arsenal team, it’s because: 1 – He’s injured too often (The Injured) [Wilshere?] 2 – He doesn’t bring immediate value to replace an established player (The Forever Squad Player) [Zelalem?] 3 – He doesn’t seem like someone who get’s better with time (The Average Youth Player) [Sanogo?] 4 – He doesn’t want to fight for the spot, even without any of the above flaws (The No-Fight-In-Him Player) [Debuchy?] Gnabry is a good mix of 1 and 4 with a hint of 2, and… Read more »

If you can’t deal with that, please go elsewhere.

No one seen brass eye then…

I have but didn’t catch that reference. Fair to say it doesn’t work well in this context.

Considering how well players who have played on the wings have done pretty well this season he would’ve played less. I guess it was between the Ox or Gnabry only one of them would have stayed, hence the lack of resistance in letting him go or even getting him to sign a new contract.

why in the hell bayern would want another player. with all the players they have got they can play two worldclass teams. any player who goes to there would be lucky to be even on the bench. just ask the best young player of the euro 2016 renato sanchez. theres just too many worldclass players there to even compete , probably a bettter squad than even barca

And he HAS ended up at Bayern

i don’t understand how bayern can agree to sign players from their own league before the transfer window opens (see- gotze, rudy, sule)

“At the moment we do not re-sign him.” At the moment? If we were to sign him back what would the circumstances and outcome be?

This is too much for my fragile little mind to wrap my head around.

Daydreaming about Alexis kicking grapes around a Chilean vineyard is a much more satisfying experience. I smell a full scale fantasy approaching on my afternoon horizon.

if bayern were indeed behind gnabrys transfer then chances are he will more or likeley end up at bayern. regardless gnabry recently said that he is open to move to chelsea or arsenal. may be he is just bluffing to get a better deal at bayern or maybe he just might be open to return to arsenal. even bayern who were initially very interested in signing him is not keen as they were intially as they have more concerns in the defensive department that in the attacking department where they are stacked with worldclass players. would love if wenger decides… Read more »

Tony Pulis will rue the day he let Gnabry go

I doubt. It wasn’t his player and I suspect he hated the idea of developing a player for Arsenal

I would like to see us re-sign him. It’s not something we do often with talented youngsters but i think it’s something top clubs shouldn’t shy away from. Pogba is a good example.

If the talent is there then why not? I always thought Gnabry would make it. Especially after the goal against swansea and his really positive run in the first XI a few seasons back.

Give him two seasons ripping it up in the bundesliga and then I rate we should sign him back. Do a de bruyne.

Great talent! To bad we missed out on him.

If Gnabry had stayed, would he have been in the first team? Honest question..

Is he better than iwobi?

i think he would’ve been. people forget that wenger was the first manager to give him chance at first team when he was just 18. then he was injured for a whole year and then the pulis thing .even though for a moment it looked like he would not breakthrough the first team again, he still was one of our best academy player and when he returned from loan to academy team he proved it with some stellar performaces. but it was at the olympics where he proved himself . after olympics it was a given that he will be… Read more »

He may not have been in our first team, but he could have signed a new contract,
and then gone out on loan to the same German club – Werder Bremen – that he’s
currently getting game time at.

That would have been a win – win situation.

He has been doing pretty well but who would he be ahead of? Walcott (not my fondest player), Iwobi, Ox or even Campbell(Who i believe is consistently and overall better than the others)

Another day, another article and still no sign of Fatgooner. Or Rambling Pete for that matter. I wonder where they went to ? Maybe they are marooned somewhere on a desert island, Pete rambling about something irrelevent, Fatgooner complaining about Wenger and the lack of food…

Pete still shows up from time to time, always with a classic. Fatgooner mysteriously disappeared right after a 24-hour all-you-can-eat buffet opened on his street.

I for one firmly believe Bayern played a clandestine role in his opting to sign for Bremen, doesn’t make sense other wise. Aspiring talents in football simply don’t leave a top club like Arsenal to commit to a club like Bremen….its against norm.

Why would we buy back, probably for 3x the price we sold him, a player who forced his move out? After we developed and supported him during his long injuries? Fuck him

I’m glad he’s gone to be honest. Hearing his name pronouced “Ger-nabry” just bugged me. Even if that was the correct pronunciation, it just didn’t sound quite right.

I agree, that’s always annoyed the hell out of me too. Even if it is correct. I have never heard somebody say “Let’s go out and buy a garden Ger-nome”.

Wenger treated this young prospect no different than he has any other potential fledgling at AFC the loans deals never worked out mainly due to gnarby’s attitude and lack of work rate in training, we backed him through his injuries and he did show promise, AW wanted to keep him thats for sure, hes done well in germany but cant say 3 goals against sanmarino is judgement on world class striker. he would not want to come back and earn a place so its a dead deal unless there is a clause in his contract