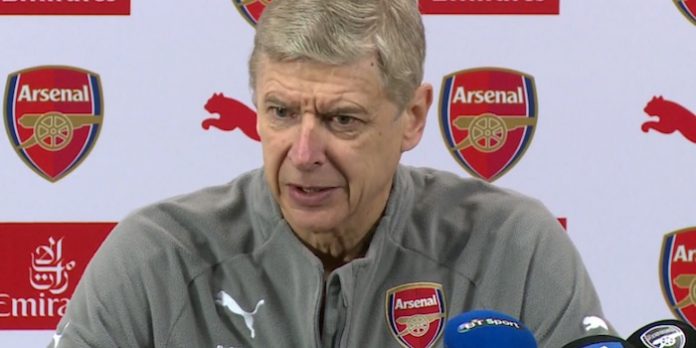 Arsenal face Burnley at the Emirates on Sunday, and at his press conference this morning Arsene Wenger has provided the latest team news update.

There are a number of players making a return, but there’s no sign of Theo Walcott coming back from a calf injury which has kept him out since the 2-1 defeat to Man City in December.

“From last week Bellerin, Coquelin and Gibbs are back in the group,” he said. “They should be available to be selected for Sunday.”

Having gone off against Swansea in the 4-0 win last weekend, there was a worry over in-form striker Olivier Giroud, but the French international hasn’t suffered any serious damage thankfully

“Giroud is back in training since yesterday,” he said. “No Walcott though.”

The Arsenal manager also revealed that Per Mertesacker is a couple of weeks away from making his comeback after suffering a knee injury in pre-season.

Another one of theos weird injuries

Theo should be ready for the Chelsea game.

We can easily manage Burnley with available squad at home.

Let’s hope Theo comes back to face Chelsea and scores with another fall over then score routine.

Good that we have a bit more depth in midfield with Coquelin. And Bellerin very welcome to be back.

Theo isn’t even in training yet.
He is proving to be more injury prone than Jack 🙁

well i saw him in the training pictures of yesterday session. maybe I’m blind I don’t know.

Not a ‘Giroud game’ for me….Sanchez and Perez!

Its always a Giroud game he by far is our best target man.

Why not
Reply to  Rashwho

He has scored big goals in every game he has started or played in. Give the man some credit

Playing Giroud makes perfect sense against Burnley; this game won’t be dissimilar to the WBA game. His aerial presence and physicality will be crucial against the Burnley back 10.

i think welbeck have the necessary height and physicality to be a good target man . he will never be as good as giroud ofcourse but he can be a more mobile

perez defilitely deserves a chance. but im afraid he is too down in the pecking order. wenger has his preferences ofcourse but right now perez’s case eerily resembles campbells. if that is indeed thr case then its bad for him

Don’t really agree. Campbell got a lot of chances and was good to okay when played. I think the hype around him is mostly because he had a good workrate and performed better than expected (let’s be honest, nobody expected him to have any kind of impact).

Lucas has been kept on the bench by in form Walcott, Giroud, Iwobi and Alexis, and an injury earlier when he probably would have started games otherwise.

In open play, Lucas is only now getting up to the speed of the PL game.
Plenty of games remaining for him to shine.

Mostly good news – I’d expect Hector and Le Coq to be straight back in. Bit harsh on Gabriel as he’s done nothing wrong but Hector will help us much more going forward against Burnley.

Santi's Smile
Reply to  Make mine a Swiss miss

Prefer to see Xhaksey against a squad likely to sit back and defend. Ramsey pushing forward would likely be needed more than Coq’s defensive attributes.

just waiting on the news Theo needs a little procedure instead of an operation and then a set back blah blah blah out for the season seems to be the theme his running at, Burnley not an easy game there form is quite good more at home need an early goal to get them to come out and unpark the bus should then not have to bring Girould on for the gasp late winner he cant always pull the rabbit out the hat

How about starting the basterd striker? We definitly have had problems with deep defences without him as a real presence. Giroud may not be the best finisher in Europe, but is of course our best in that position

Why not
Reply to  Rashwho

Actually at the moment, the numbers say he is the best finisher in europe, followed by perez i believe.

The Admiral
Reply to  bazza-wicks

RE Bazza-wicks, we are at home to Burnley and they have only amassed 1 point away from home all season in the premier league. However there home form is outstanding.

Id like to see a front 3 of Iwobi-Sanchez- Perez. Reckon the latter could chip in with a tidy amount of goals/assists given the chance. Giroud from the bench.

Hoping we see Perez and Iwobi flank Sanchez. Ox and DFW to come on once we are 3-0 up.

The audio… Hahaha… nice one, Arsene.

We need 11 fit players to play on sunday and win, we need to keep up pressure on chelsea , they av fallen a few times lets get on them .

Great news that Coquerlin is back in. That midfield was looking a shade too spartan.

Plenty of options to rotate efficiently with now.

Giroud should always start when he is 100%.

Could Lucas potentially get a start or will Wenger opt for Chmberlin or Ramsey at RM?

Iwobi and Alexis on the wings probably

Potential Line up vs Burnley: