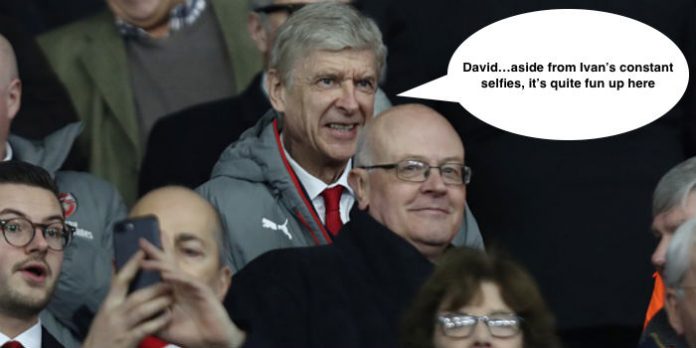 Arsene Wenger admits that sitting in the stands affords him a better tactical overview of Arsenal’s matches even if he misses the ‘physical closeness’ of being pitchside.

The boss is currently serving a four-game touchline ban for pushing fourth official Anthony Taylor in the dying moments of the win over Burnley and will watch this evening’s clash with Watford from the Directors’ box at the Emirates.

Reflecting on his current predicament, experienced for the first time this season at Saint Mary’s on Saturday, Wenger played up the importance of being able to communicate with his assistants during the game and with his players before and during half time.

“It was a bit frustrating, physically to be separated from the action [at St Mary’s] – you feel more powerless than usual,” he told Arsenal.com.

“But overall I can trust my assistant, Steve Bould, who was with Neil [Banfield] on the bench and we could communicate, so overall it went well.

“The most important thing is that the team won the game and I think when you can be in the dressing room before the game and at half-time, it helps.

“You see better [from the stands] the way your team is positioned on the field globally – you have a better vision of the compactness of the team and of the problems that you could have tactically.

“What is for sure is that the tactical aspect is clearer, the clarity is stronger but you miss a little bit the physical closeness to the team.”

No doubt, the fact the boss doesn’t mind being confined to the stands will miff those who already think he’s been dealt with leniently. And quite frankly, that’s fantastic.

If he wants he can have my season ticket and I’ll sit on the bench every week ?

I love the closing sentence.

I love the photo and the caption ?

I love the Arseblog

4 match touchline ban is the right punishment for the offence he has made. It was not as aggressive as news report say. Video proof says for it.

If being in the stands gives him better tactical clarity and us a 5-0 win, I’m all the heck for it for the rest of the season!! Lol

With his new found use for being higher up maybe he can be given a chair like the umpires have in tennis? I don’t know about you lot but I think it would look ace. Even more so if he could move around by joystick.

We played what seemed like a southampton youth team on saturday , i dont think watford and chelsea will be the same

Blueprint for the future perhaps?

George Graham as Arsenal manager would very often spend the first half of matches sitting up in the stand , go down to the dressing room for the half time team talk and spend the second half sitting on the bench. He would do this from choice stating that it gave him a better tactical view as Arsene is saying. Maybe the way forward for us. Thank you FA. 😉

So did The Walrus at Bolton… Maybe that’s not the way forward.

I did think when he got the ban that it wouldn’t actually hurt the team so much, Wenger is a relatively hands off manager during game play and likes to let players make their own decisions (for better or worse). My only worry is that he’ll start to enjoy sitting in the stands and this might convince him retirement isn’t such a scary option after all…

There’s a reason rugby coaches sit in the stands, and that is for the tactical overview. Wenger’s not kidding and the different perspective could be of benefit for the setup rest of the season. Silver lining.

The NFL is the same way. You have assistant coaches perched way up high in a booth in the stadium with radios giving intel to the head coach on the sideline, maybe directly to the QB too who also wears a radio. It’s freakin’ WWW III. When I used to watch the games I’d half expect artillery to start raining down any second.

YpsiGooner
Click to flag and open «Comment Reporting» form. You can choose reporting category and send message to website administrator. Admins may or may not choose to remove the comment or block the author. And please don't worry, your report will be anonymous.

Being a guy from the US, I do wonder why teams don’t perch an assistant up high and then relay pertinent info from above. American Football is obsessed with the concept.

I don’t see what the team gain from “closeness” that being on the bench affords. It may “feel” nicer, but the manager can do a better job from the stands, relaying his instructions to an able assistant, such as Bouldy.

It wouldn’t work for managers who micromanage players/games with lots of arm waving and pointing. But AW isn’t that type.

Wenger should stay up in the stands.

I don’t get the whole ‘closeness’ thing either – surprised all managers in all leagues don’t watch from the stands (unless they flap their arms and point of course), very obvious stuff.

In fact, Wenger should do what I do and manage the team from his couch and on message boards – even a greater tactical advantage with access to the internet. I would have won way more trophies for Arsenal than Wenger ever has..all he does is play with his zipper.

I agree, PB70. This closeness lark is heavily overrated.

Maybe like JB said, Wenger can stay up in the stands. He can then have a camera stationed there, and relay instructions to the team over a giant screen..

That’s disgusting!!! He should have been banned for life, or longer if it was anything to do with me. He should have to referee Sunday league. In Siberia. In his VEST AND PANTS!!!! He should have had to go and clean up all the little bits of mud in the changing rooms WITH HIS TONGUE!!!

Bloody FA are Arsene lovers, that lovely Mr Mourinho would never be treated so leniently………

Arsene you sly old dog. You had this planned all along didn’t you ??

You guys are cracking me up and my boss is looking daggers at me.

yeah, the funny thing about being sent to the stands and allowed to communicate and see the players before the game and at half time means they’ve basically turned him into an aussie rules coach

(they have coaches boxes mid-high in the stands, fully kitted out with whiteboards and iPads and all that stuff, and relay messages over phone to the interchange bench down at pitch level. obviously the interchange concept is still pretty different but you get the idea)

I thought the same thing just yesterday actually, about the tactical and positioning side.

It’s not the first time Wenger has said this. In fact, he’s on record as saying the ideal place to watch a game is from high up behind the goal, because you can see pretty much the whole pitch at the same time. When we used to play reserve games at Barnet Wenger could often be seen sat on his own behind one of the goals and he’s been known to say that he goes to the odd European game in disguise and sits with the fans behind the goal. I’m sure he’s considered a lot whether to sit in the stands routinely and I suspect he considers he has more psychological influence on the team from being close by.

Wenger does tactics now? What an exciting modern age we live in!
Or is this just a ploy to sell more tickets in the rafters of the emirates?

Now that’s how you play a real life FIFA 17

He can always use an ipad to see the match from the cameras’ view. I thought this should have been happening already, only if “tactics” are a priority.

Expect the FA to issue him with another punishment for ‘Trolling’ ?

Lovve the boss when he is in Class troll mode

When the FA want to punish you, but they are as dumb as their referees.