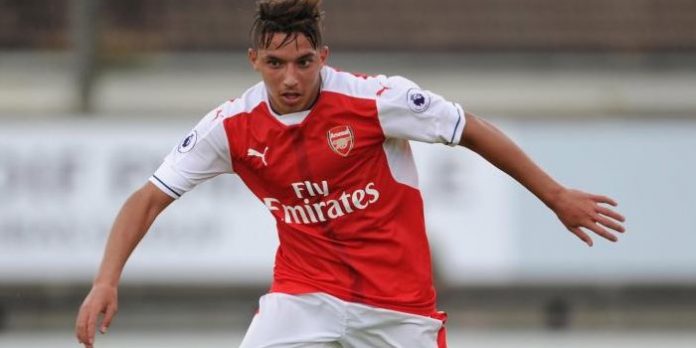 Young midfielder Ismael Bennacer has been handed a surprise call up to the African Cup of Nations by Algeria.

The 19 year old, who joined the Gunners in 2015 from French side Arles, has played 12 games for the U23s this season, and was brought into his national squad because of an injury suffered by Saphir Taider.

Bennacer, a highly-rated creative midfielder, has made just one appearance for Arsenal, in the ill-fated Capital One Cup defeat to Sheffield Wednesday last season.

Good luck to him in Gabon, where fellow Gunner Mohamed Elneny is representing Egypt in the tournament.

Good for me. I like Bennacer. I hope he makes it here.

Good luck to the young lad. The international experience will do him good.

He’s a tidy player. Can put his foot in and a good range of passing. Check out the assist he got for Nketiah’s goal against Derby the other day. Definitely one to watch. Let’s hope he impresses in training and gets some minutes on the pitch. Good luck Ismael.

He’s played once (I think, only) for the first team, coming on as substitute and playing 70′ in the Capital One Cup last season against Sheffield Wednesday. Didn’t disgrace himself either (though the team were largely toothless after injuries to the Ox and then Walcott, whom he replaced).

Another braindead youngster who’s decided to compromise their Arsenal/club career but choosing to represent an african nation when he was born in europe. Seriously what kind of advice do these kids get? How many players do they think our first team squad can handle that might disappear for a month or so every other January? Elneny (who we knew was african when we signed him and was at least was born in africa) has left us just when we need him and we now have only 2 fit central midfielders. If we drop points because we lose another midfielder it’s… Read more »

He might not be good enough for the European team so if he can make an international team then good for him.

In Canada, we have the complete opposite problem. Our players (if good enough) choose to play for European teams even though they grew up in Canada. (Think Owen Hargraves).

Why wouldn’t he? He’s obviously of Algerian heritage.

There’s something not right about the way you dismiss their decisions because they’re playing for African nations.

Is Iwobi brain-dead too?

Yes he is, Iwobi wasn’t so Nigerian not to play for England nor Bennacer so Algerian to play for France so neither is so principled to have turned down those opportunities. Iwobi at least was born in Nigeria. Neither of those players represent African football production as they’re both the product of european football academies, all they’re doing is taking away the chances of a local african footballer to showcase their talents for their countries on the international stage. They’ve had all the advantages of training and being coached at Arsenal through their childhoods and now, on a whim, and… Read more »

And what is it to you?

Are you stating that someone grown up in European clubs would cause harm in Africa? I think you need to respect competition and what it does in the long run for improving players and their performances. So hats off to this young lad going to represent the country of his heritage in one of the biggest tournaments out there.

what if the shoe was on the other foot?

If you were born in Taiwan, and your family lived there for 19 odd years, would you choose To play for their national football team, or England?

no, but the English FA is for letting him slip through their fat fingers. He could have led England to World Cup glory/disgrace. Good on him for going to Nigeria tho and doing a rainbow flick to the FA.

I’m very interested to know if you could tell me how a kid born in France and who’s footballing education came from France and England represents African football and in what way it advances it?

In France, you do not get the citizenship because you were born there. You have to wait the age of 18. Nice way of teaching someone, he is French or European.

John, that’s total nonsense. To call Iwobi brain dead for representing the country of his birth is ridiculous and offensive. He was born in Lagos, to Nigerian parents, and moved to London at the age of 4. To say he’s brain dead or selfish for choosing his own country is really pretty stupid. Same with Bennacer, if his heritage/parentage is Algerian, and that’s who he feels connected to, then who are you to call him out on it? By the way, he was also routinely ignored by England’s under-age teams and the FA. Seriously, you’re coming across as a Little… Read more »

You don’t know where i’m from, so keep your little-englander comments to yourself. Both of them have made it up as they go along, and where happy to represent the countries they grew up in when it suited them but even so the timing of the ACN is so stupid it puts a barrier in front of their careers before it even starts. Elneny has hardly played this season and i think it’s down to Wenger knowing he’d be away in January. Iwobi has been fortunate that Nigeria didn’t qualify otherwise i’m positive he wouldn’t have played so much as… Read more »

Whatever way you want to try and justify it to yourself, you called players ‘brain-dead’ and ‘selfish’ for choosing to play for the countries of their birth or heritage, and have been dismissive of them further because they’re African nations.

Iwobi’s uncle was one of Nigeria’s greatest ever players, for goodness sake.

I was born in England, but was always Irish. Obviously a massive hypothetical, but I would never have played for England if I’d been good enough. The same probably applies to these guys.

I’d like to know what strain of racial discrimination weed you’re taking man, that shit needs to be banned asap

If there is a brain-dead moron here it’s not Ismael, mate…you get me?

The real issue lies in having an African competition in January every two years. Once every four years would be much more palatable.

It is a much a developmental tool as is political. African countries need yeh tournament to advance economic advancements.

John C, seriously embarrassed you are an arsenal fan

What do you know about having a double nationality? How it feels? You can love and be proud of several countries or cultures. Of course he should play for who ever country he wants. Whenever he wants.

Go for a long walk in the park and think about it. The world is big place, be part of it.

I think his point was lost in his poor choice of wording. The point I’m referring to was something along the lines of it is wrong if kids who have left Africa (or wherever) and received European (or wherever) training and coaching decide they want to represent a nation because it might deny a locally trained kid the opportunity to showcase themselves on the international stage. At least I think that’s what he said, if he didn’t then I agree with myself lol What I find even more ridiculous is when you see nationalised players. Something about seeing an “Alex”… Read more »

Ok you my man are a dick.

With more World Cup places(admittedly in future ) places for Africa and Asia and West Indies teams in future more players will not pick England . Look at iwobi.
Jenkinson could have 40 caps for Finland by now in a similar situation.

Diego Costa playing for Spain is okay I guess

Diego Costa is not okay.

He is a dickhead.

Who will likely win golden boot in a league winning side whom i would love to see in arsenal colours.