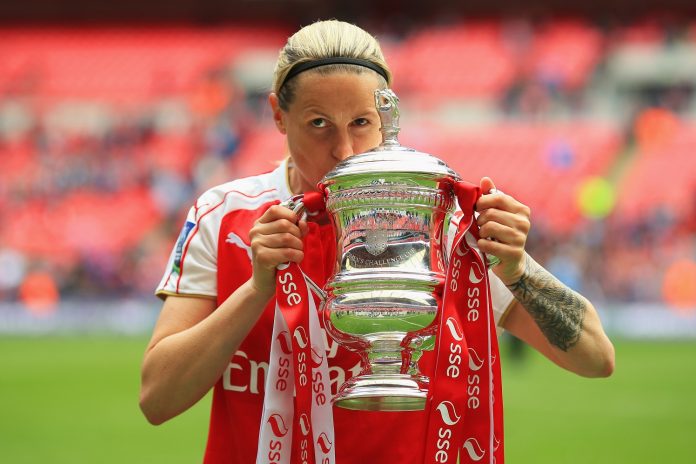 “I’m not as shy as I used to be,” a chatty Kelly Smith tells me, “I’m still not the most outgoing person, but I have worked on myself a lot,” then she pauses. “But I am a Jekyll and Hyde character. Once I cross that white line, I become confident and assertive and that’s because I have a very competitive nature.”

That competitive nature has seen Kelly become England’s best ever women’s football player without question. (Just try to find someone in the women’s game to challenge that assertion). Smith called time on an illustrious playing career in January. Kelly was not so much a Rolls Royce of a footballer as a luxury yacht, revered throughout the women’s game.

She acknowledges her feisty on pitch persona, for Kelly was in equal parts an artiste and a fighter on the field, a one woman force of nature. She has been no stranger to adversity during her career, as homesickness, alcohol and a series of serious injuries have pockmarked her glowing professional life. Smith’s tenacity was forged at an early age, at Garston Boys’ Club, near where she grew up in Hertfordshire.

Kelly was removed from the team because of her gender, after a slew of complaints from the parents of her male teammates. That she had finished the season as top scorer was seen as emasculating for her young colleagues, so she was told she could not represent the team anymore. “It helped my motivation to succeed,” she reflects, “I faced adversity right from the get go, so it gave me that extra determination to prove people wrong.”

Triumphing in adversity became a recurring theme in the career of England’s record goalscorer. She candidly admits that she had all but decided to retire in 2015, when an appalling challenge from Sunderland’s Abby Holmes ruptured Smith’s ankle ligaments- a challenge which she raged at. “It was very difficult to cope with emotionally after that horrific tackle,” she admits. Kelly might be a taciturn character, but you learn quickly that she says what she means.

“I thought, ‘you know what? I can’t deal with this, I’m gonna quit.’ These serious injuries kept happening, I wasn’t pulling my hamstring or anything, these were season ending injuries. Sometimes career threatening and I didn’t think I could deal with it again. But the longer I went on with rehab and the longer I had to come to terms with it, I thought ‘I don’t want to go out on another injury. I want to go out on my terms.”

Go out on her own terms she did, winning the FA Cup with Arsenal at Wembley last May- her penultimate start in an Arsenal shirt. It proved to be one of her most cherished career moments, “I have been an Arsenal fan all my life, so walking out at Wembley with the Arsenal badge on my shirt and climbing those famous steps to lift the trophy in front of the Arsenal fans was just incredible.”

In her final match, Kelly came on as a substitute against Doncaster Belles in October. With the final swoop of her boot in an Arsenal jersey, she lobbed the Donny Belles ‘keeper from 30 yards with a gorgeous chip that kissed the crossbar on its way in. “I knew it was my last game, my teammates didn’t know and the coaching staff didn’t, but I knew it was going to be my last appearance so I wanted to make an impression.” Smith wanted to finish her playing career by making an impression and departing on her own terms- missions very much accomplished.

Smith’s career has been so decorated, that her highlights reel begins to look like a shopping list, but she is in no doubt as to the most productive part of her Arsenal tenure, “Winning the UEFA Cup in 2007- which is now the Champions League. We’re still the only British side to have done it. We won the quadruple without losing a single game that season. That was a very special team with special players playing at the top of their game.”

Kelly missed both legs of a nerve wracking 1-0 aggregate UEFA Cup Final win over Umea in the final due to suspension, she confesses that this remains a regret, “It is, but I contributed in the build up to the final.” The girls held a 1-0 lead from the away leg in Sweden and proceeded to defend resolutely for the whole 90 minutes of a nerve shredding second leg at Boreham Wood. “I felt physically sick watching, I was sweating and my heart rate was off the charts,” Kelly remembers.

One moment in particular caused everyone inside Meadow Park conniptions that afternoon, “I remember the ball hitting the post, hitting Emma Byrne on the head and then going out for a corner. I just felt it would be our day at that point. We probably shouldn’t have won, Umea were better than us and we had to do a lot of defending. But when the final whistle went, I remember jumping onto the pitch in tears.”

Watching Arsenal Ladies from the sidelines will define the next phase of Smith’s career. She has a coaching position within the club and she is open about her ambition to manage Arsenal in the future, “I always had goals and targets as a player, so yeah I think that would be my goal now as a coach. I have been at the club most of my life since I was 16, so I know the structure here. But I am right at the bottom of the coaching ladder,” she declares.

“I need to spend the next few years growing as a coach, learning from people like Pedro Losa, observing sessions. I have lots of experience as a player, but not much as a coach, so I need to get that experience and I will see where it takes me.” Kelly’s longevity at Arsenal will be celebrated this Sunday at Borehamwood, as Arsenal Ladies take on a Kelly Smith All Star XI, managed by Smith herself. Set to feature are past Ladies’ legends such as Steph Houghton, Faye White and 90s icon Marieanne Spacey.

Spacey was Arsenal’s marquee player when Kelly arrived at the club as a 16 year old and became a role model for the teenage Smith, “She was a massive figurehead at the time. I think I really learned from her finishing, she was a pure goalscorer. She was tall and powerful, but when you put her in front of goal, she was very elegant. She never missed. I really tried to learn from how she faced those situations and I really wanted to take on her mentality too.”

Smith is not only looking forward to seeing some familiar faces on the field, the 38 year old looks forward to recognising familiar faces in the crowd as well, “It’s great to see the same faces in the crowd supporting us every week. We talk with the fans a lot after games, it’s something we can do in women’s football that perhaps the men’s team can’t do and it’s important that we keep doing that in the women’s game,” before concluding, “I just want to say thanks to the fans for the support that they have given me and the club over the years. I am truly thankful.”

So are we Kelly, so are we.

Arsenal Ladies will play a Kelly Smith All Star XI on Sunday, 19th February at 2pm at Boreham Wood’s Meadow Park. Tickets are £6 for adults, £3 concessions and are available here. There will not be a cash turnstile on the day of the game.

Great that she is revered, well deserved.

Wish I knew more about the ladies, they have been very successful for a long period.

Great article, thanks Tim.
An admirable career and part of a quadruple invincibles team is something special and it’s nice she’s staying with the club, we’re lucky.

Come on you Gunner!Arsenal is such a great club. I mean just look what it has achieved since moving from Woolwich! Wow….

Thanks for this Tim. Like many, I feel it’s a real shame the woman’s game doesn’t receive more press. If we had a male player as dedicated to the club as Kelly in the modern age we would have no idea what to do… And yet she almost passed unnoticed

And yes I’m a hypocrite. Ive not been to a woman’s match. Really should sort that out

Kelly is an absolute class act. I had the pleasure of meeting her when she was in Vancouver for the 2015 womens World Cup – she came to the Arsenal bar for the FA Cup final against Villa. She made time for everyone who wanted to chat with her and posed for pictures, and she was a true gooner yelling as loud as the rest of us when we scored and when we lifted the Cup.

I’m going to her testimonial match this weekend and I hope she’ll sign the pictures I got with her!

She got a well deserved ovation on the pitch at halftime during the Hull game on Saturday – and also revealed she’s expecting a baby in the summer, so best of luck to her with that too!

The legendary star of a legenday team — the high point being that quadruple year. It’ll never be forgotten, almost certainly never matched. I was so delighted for her winning that last FA Cup last year. So many cups, championships and trophies were won by the Arsenal Ladies during Kelly’s career, which I would claim dwarfs the achievements of any British footballer in any era. Maybe any British sportsman or sportswoman, even. She’s a lovely character, and as she says in this interview, in calling an end to her playing career she only moves on to a new chapter.