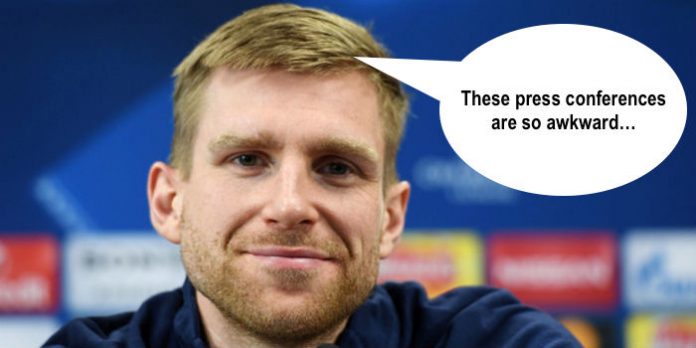 Per Mertesacker has called on Arsenal to show fight and to ‘go for it’ against Bayern Munich even though they are 5-1 down on aggregate following a torrid first-leg in Germany.

After a wretched run of four defeats in six games that has left the Gunners’ Champions League and Premier League hopes in tatters, the Arsenal captain was openly critical of his side’s lack of fight in recent weeks and called on his teammates to make the fans proud again.

“I think we saw on a lot of occasions that we were absolutely not ready for a fight, and that’s what I want to see tomorrow: that we are up for a fight, to challenge something,” the BFG told press Monday.

“We need to turn it around. That is really the focus, to come back to our strength.

“I expect a lot from our players performance-wise, that is what we demand. We wanted to be in the Champions League, we are still in there so let’s go for it.

“We played hard last season to get there and now this is our chance to get everyone back [onside]. But it is down to focusing on the next opposition.”

As we all know, Arsenal haven’t made it past the round of 16 since 2009/10 and the chances of us changing that this year are apparently ranked at 1.2%; that’s according to a UEFA study that looked at every single identical scoreline from every competition in European history ahead of second legs.

Only three clubs have managed to recover a four-goal first-leg deficit in UEFA competition.

Deportivo La Coruna hold the record for the biggest first-leg deficit overturned in the UEFA Champions League era, recovering from a 4-1 away loss to AC Milan with a 4-0 home win in the 2003/04 quarter-finals.

“so you’re telling me we have a chance!”

The only pair that lifted the team in the last couple of years was Coqzorla. Even our summer spending of £100m+ could not replace them

Anyone think Mert should start instead of Mustafi tomorrow night? Anybody? No? Dust.

Sounds like a good idea. Miss the pairing of BFG/Koscielny, and the risk is minimal. So why not?

I love Mustafi but he mustafi learn from Per’s experience.
That was horrible. *grabs coat*

Mustafi has been decent but I am glad to see this thread. Mert and Kos was a good partnership. Mert, who we know can get beaten for pace, adds a lot of positional nous and allows Kos to be aggressive without being caught out.

I think that was Arsene’ biggest mistake in the away leg, when Kos came off injured. He had the BFG on the bench, a guy who speaks German and has played like shit loads of big games at centre half for Arsenal, and knows what its like to play in Germany – oh, and our other centre half is also German….. but instead he opted to play Gabriel; a guy who literally can only speak Portugese, and who is also shit at football. Hilarious.

Arsenal is my life
Reply to  Jack

Sancheezy
Reply to  Arsenal is my life

Yes!!! Chaka and Coq in the middle but Coquelin’s passing worries me sometimes. I’d have Welbz, Alexis and Theo at the top in a 3-4-3 formation.

A Different George
Reply to  Jack

Before his injury, I thought Per spoke pretty fluent English. Still does, but I think he has been taking accent lessons from Bellerin.

Per should be the Arsenal boss. At least he has the nerves to shout at Ozil when he needs to. Imagine what he would say to other players after an abject performance?

Would love to see the BFG as a part of the future coaching staff. We should defintely look to Bayern where there of lot’s of legends and former players in different positions around the club.

Wouldn’t mind Overmars and Bergkamp either. We need keep our brainier players after they retire…

I love you Per, I really do. None of this season has been your fault. But please…enough with this make the fans proud bullshit. Make yourselves proud first, and then worry about everyone else. Nobody is in the mood to hear this right now (even though I know you were only answering a question).

Now where have I heard this before..?

I’m watching tomorrow’s game regardless of what’s going on internally in the club.

As long as the players make an effort, that’s all that matters to me.

Wouldn’t it be far more Arsenal to win 3-0 and agonisingly miss out? Who remembers Milan? 4-0 down after the first away leg and we play brilliantly with nothing to lose and the skunk had a golden chance to make it 4 but tried to be too clever with a delicate chip instead of putting his foot through it.

If the the players aren’t up for it (the most likely scenario judging by recent weeks) this will get very ugly.

We´re making all the headlines for all the wrong reasons. That´s what you get when you dont show up in matches.

Yes. More lessons learnt. What we need to do……

Cue another abject performance and a 3 or 4 nil defeat

But we keep saying this trite over and over.

Not expecting anything from CL.

If we don’t get humiliated again, I’ll be satisfied.

You are a changing man Santori.

It’s time for the bfg to make the dressing room care again.
I won’t be tuning in tomorrow due to work, but haven’t watched more than ten minutes of a match since the bayern game- I don’t need anything else negative right now.

We really needed those stats didn’t we?

just don finish below spurs which we are in grave danger of now.

So many stories,so many lies, the only thing I believe is what I see and i see a team in really poor form that has completely lost its way.

It doesn’t matter what any of the players say before a game, we’ve heard it all, it means nothing now.

It’s the players actions on the pitch that counts, go out there and make a difference stop depressing the fans and stop feeding the media.

I’m not expecting miracles but turning up and giving it everything and leaving it all on the pitch should be a minimum. Coyg

“I’m not expecting miracles but turning up and giving it everything and leaving it all on the pitch should be a minimum. ”

Are we gonna go for it tomorrow night like we went for it at Anfield? Cos I don’t think I wanna see that. http://news.arseblog.com/2017/03/arsenal-set-to-go-for-it-at-anfield-as-wenger-looks-to-change-away-record/

The trick now is not to expect anything.

Regarding the “Board”/American Owner…I struggle to think what exactly you want them to do beyond firing Arsene Wenger which will make some fans feel better (short term at least) without thinking of wider ramifications. Firstly – I’m not sure I’d like the owner (who is not a footballing man) to weigh in on matters football. He sould take care of keeping things financially healthy which is what he is doing. Secondly – If you were the board, the last thing you’d want to do before the end of the season has worked its way though is destabilise the ship further… Read more »

The fans want blood, mate, and the mob shall rule; it’s over. Lock the doors and turn out the lights, and wait for the proverbial storm to pass. This shit is going to get biblical …

Pre match presser: “let’s go for it, play our game, come out and play at high pace”.

It’s almost as though we’ve seen the movie before.

Only excuse remains for whichever player is on Denilson/Djourou/Walcott bullshit meaningless platitudes duty post match to reprise John Belushi’s desperate rant to Carrie Fisher in Blues Brothers : “a friend came in from out of town….there was an earthquake….,,IT WASNT MY FAAAUULLTT”.

We are the butt of all the jokes rite now. Its great, I fucking love it……….. Last nite on MOTD, we were just having a barrel of fucking laughs about the Arsenal, such fun for everyone. Then its time for Goal of the Fucking month……Hazard waltzing thro the pathetic Arsenal rearguard……..at one stage during the clip where Eden( a relatively small chap) is bypassing his fourth Arsenal “challenge”, Coq sort of bounces off his legs and does a kind of twirl before he hits the deck, the like of which you wouldnt see on Strictly come Fucking Dancing. Oh its… Read more »

Mertersacker is basically being paid these days to be a backup and use his authority to keep his team-mates in line. So I guess the Sanchez blow-up is a big fail, I’m afraid.

Arsenal fan for 24 years. Never felt this sick and let down before by the club players and the manager.

We are a mess, hope things change. 6th looks like our best shot this season.