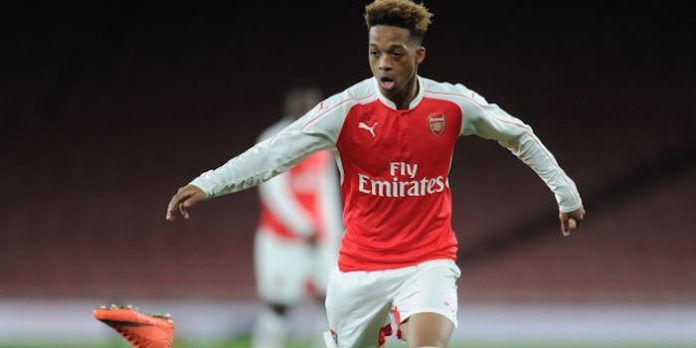 According to the Daily Record, Celtic are keeping tabs on Arsenal youngster Chris Willock with a view to an approach in the summer.

The highly-rated 19-year-old England youth international is out of contract this summer and is thought to be weighing up his options despite being offered improved terms at the Emirates.

It is claimed that Brendan Rodgers sees Willock as a potential replacement for winger Patrick Roberts who has been on loan at the runaway SPL leaders this season from Manchester City.

Willock made his first team debut against Nottingham Forest in this season’s EFL Cup after impressing for the club’s under-23s on on the pre-season tour of California. His younger brother, Jo, is also part of the Academy setup at London Colney while his older brother, Matt, is at Manchester United.

Wtf, our arguably biggest talent in the youth team for yeaaaars is out of contract?!

You appear to be clearing house this summer. I am available on a free and will entertain any offer put forward.

Ha.
I’ve made myself available for the cost of living expenses simply to give the halftime team talks (read: halftime rollicking) to the team.
I’ll even do it over Skype if the necessary special talent visa cannot be arranged for my immigration from the us.

Seriously this club needs to ge their sh*t together. If it’s a case that Wenger has to be involved in all contract talks, then it’s clear this club needs a sporting director.

It seems bad enough having Ozil and Sanchez wind doe their contracts, but I had no idea one of our most talented academy players was allowed to get into his final year of contract like this.

This is happening way to often to be a coincidence. This early ever happens to all the other top clubs

He’s been offered new improved terms, if he wants to wind down his contract he’s allowed to. Not sure what the club are supposed to do if he wants to leave

Chelsea actually buy players and keep loaning them out until they become starters somewherr and can be sold for a higher value. We on the other hand can’t seem to convince our own academy product that we’ll find the right loan spells for his development until he’s ready for the arsenal first team.

Um, offer better terms? Not saying this would necessarily resolve the issue, but since you posed the question…

The Playmaker
Reply to  Ivan Drago

Maybe it’s not about the money. Many of our talented youngsters have stagnated the past 5 years. Wilshere, Ox, Gnabry were some of the brightest prospects in world football in their teen years. Look at them now. How much have they improved under Wenger? Gnabry has arguably revitalised his career by moving away. Willock might be thinking of the same thing.

Get out while you can, Chris!

Celtic can fuck off!

His older brother pulled a similar stroke when he joined United over us. Seems like it might be something in the family.
And although he’s good, Nelson is much better.

Seems like the much vaunted youth system is not quite as good for giving young talent a chance.
Of the current first team squad how many actually came through the ranks as a player produced by Arsenal?
Kieran Gibbs.
Everyone else was brought in.
Another fail on the part of Arsenal…

About par with the other big clubs too.

Sorry I meant to upvote you. We’ve been pretty good at giving youngsters a chance. Obviously very few make the grade, and the complete lack of successful CBs has always been a disappointment. But we do generally give the kids an opportunity.

And Coquelin who came at 16 as well

Off topic but … HA HA HA HA HA! NASRI THE CHINLESS CUNT JUST GOT SENT OFF FOR SEVILLA! Attaboy, Sammy, that’s the way to keep your team in the Champions League!

Vardy is a diving, windup merchant cheat! Costa without the talent. Oh, But the English press does love an English lad with grit!

Not sure what Willock should do but I can understand his hesitance. When was the last time Wenger developed a player past the age of 22/23? He is great for you until it’s time to take real responsibility in the team. Ramsey, Wilshere, Ox have become average players. Maybe they always were but the first two have stagnated hugely. Not just because of injuries – there is little discernible progress in their game mentality and ability to be clinical. Wenger does not develop teenagers into the world class talents they should become. Guardiola loves Wilshere because he has done is… Read more »

Who exactly has Guardiola developed? All I remember is him buying a couple players Wenger developed from teens (Song and Cesc), and a couple older players (TV and AH). He has moved into two of the best teams in the world and kept them there. Followed by a top 4 English side that spends top 2 money and so far kept them in the top 4. Many of you are so keen on Pep, but thus far he has managed remarkably similar results to Wenger, but done it with more costly players.

Can you with a down vote also name a high calibrate teenage player Wenger developed to their full potential? I don’t know one. Wenger talks them up, plays them endlessly – even when they need a breather see Wilshere before and now Iwobi, even Bellerin. And by the time they get to 23-4 they seem to stagnate. He’s had Theo for 10 years! Ox for about 6 or 7 – what have these players learnt in that time?

I saw willock on Monday night at the emirates for the u23s and he looked pretty damn good although I think the one we really ought to keep hold of is reiss nelson.