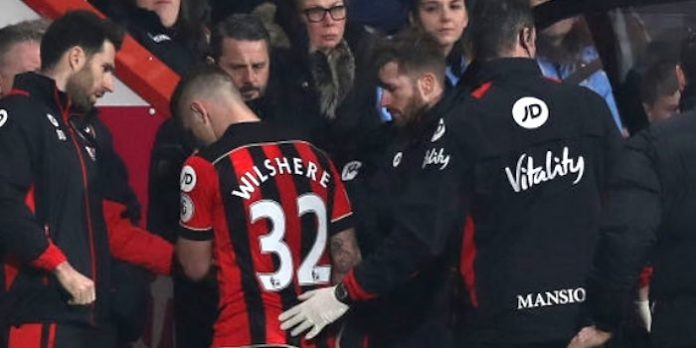 Arsenal have confirmed that Jack Wilshere has sustained a cracked fibula and will miss the rest of the season.

The midfielder had made 27 appearances for The Cherries before picking up the problem in a clash with Harry Kane last weekend.

In a statement on the official website, the club said:

We can confirm that Jack Wilshere has suffered a fractured left fibula.

The midfielder, who is on a season-long loan at AFC Bournemouth, sustained the injury during the Cherries’ Premier League match at Tottenham Hotspur on Saturday. X-rays taken after the game were clear, but further scans showed a hairline crack in the fibula.

Jack will undergo further specialist assessments in the forthcoming days to identify more specifics regarding the injury and also to structure a rehabilitation programme. It is hoped that Jack will be fit for the start of next season.

Everyone at the club wishes Jack a speedy recovery.

The injury is the same leg that he broke at the start of the 2015-16 season which kept him out for most of that campaign due to complications from the injury.

Bournemouth boss Eddie Howe said, “It is a big blow to lose Jack. We have loved working with him since he arrived at the club last August.

“He has made a huge contribution to our season, both on and off the pitch. We wish him a quick recovery and thank him for his effort and professionalism while he was with us.”

We assume Wilshere will return to Arsenal for his treatment and rehabilitation before it’s announced that his right ankle has been replaced by a chair wheel and his left leg by a stick. Although no final decision has been made on that yet.

Get well soon, Jack. He really does deserve an injury free run.

Ryan Fraser: By the numbers

Really sad news, but unfortunately I think that’s the end of his Arsenal career. Would love to have seen him go on and be really successful with us, but if we want to move forward I feel we need to start being ruthless. It’s an admirable trait we stick by players, but also adds to the staleness and complacent nature around the club in doing so. It’s a bit crap to think like that, but if we are honest, if you want to be successful you need an element of that. Hopefully he can still make a great career when… Read more »

If Wenger stays, that’s just the beginning of his Arsenal career

Too Drunk To Be Offside
Reply to  Arsene\'s handkerchief

Feel if anything, it increases his chances of staying at Arsenal.

The club’s hand won’t be forced with Wilshire like it is likely to be with Ozil and Sanchez, as even with his contract winding down, an injured (again!) Wilshire is not going to be the hottest property in the market.

Wilshire will be forced to go with the contract that Arsenal put on the table for him in the summer or risk being unemployed at the end of the season that follows, without any great options available to him.

spinner
Reply to  Too Drunk To Be Offside

I think we should keep him just for the open top bus parades. What do we think of T*ttenham?…

Guess he won’t be “breaking” into the first team any time soon.

If it’s any consolation, someone will probably come along and call him Jack Wheelchair soon, and that will definitely get more down votes than yours.

My dad calls him that, it’s such a dad joke

Can I call you Loose Cannon Jr ?

To be fair, it is a quality pun, son.

Too Drunk To Be Offside
Reply to  arseblog

That is some ‘breaking’ news for sure.

so many thumbs down! I thought that was a cracking good joke 🙂

If Punnersaurus can’t get away with it, neither should you ?

Wonder if the reaction would’ve been this bad if I’d done one about “Breaking” News….

Too Drunk To Be Offside
Reply to  Punnersaurus

We will soon find out (refer my post above) 😛

Surgery is costing us an arm and a leg…

I find all of these puns about “breaking” bad.

Shame, yet again, for all parties involved.

Sad, sad news for Jack. His career hangs in the balance at this point.

To add insult to injury, a fair few Sp*rs fans were cheering as Jack went off injured. Fucking shitsmears.

They did it to Theo too. Mind you, I wonder what our fans would do if Kane was being carried off?

Hopefully it’s not too bad a fracture, he did walk off and a small one could heal relatively quickly. Disagree with people writing him off and saying that’s the end of his career, he’s a hugely talented player and it would be madness not to keep him around only for him to succeed elsewhere. Managed more or less a full season and was unlucky with a bad clash, and people are writing him off? Wow

Kinda says it all about Jack that a tiny hairline fracture can be career threatening.

For anyone else, we would expect them back in 6 weeks or so.

But who’s saying it’s career ending? The doctors? The managers? No, it’s the pundits and media types who don’t have a clue about sports medicine but no everything about generating clicks! Don’t fall for it

How many years are we supposed to waste a squad place on a player that’s mostly injured just because he had a fantastic game against Barca years ago? Jack is always and always will be injured, and when he’s been fit at Bournemouth he hasn’t exactly done anything to suggest that he’s good enough for Arsenal. We need to upgrade, and I don’t care if he’s Arsenal through and through, so are lots of us, but that doesn’t mean we can play for Arsenal.

Not good for Arsenal but good for England right after coming back from injury to play in EURO ?

The English squad is perpetually overrated and never actually performs when it counts – kind of like us the last few years.

It’s a 6 week injury that doesn’t need surgery and he’ll be back in July, and it was an injury that could and does happen to anyone. You might want to check out that jerky knee, mind

i’m i the only one who feels like we are way and truly above everyone else when it comes to players careers going to shi*s. Diaby, Rosicky, Ramsey, Welbs , Theo and the Ox…..

Poor bloke has the worst luck.
Problem is there’s too many cunts waiting to injure and maim players.
Heal quick Jack

Good to hear praise from Eddie Howe about his professionalism both on and off the field. Sounds to me in terms of maturity this move has been a good experience for him. I hope he is back with us next season.

There it is. Poor old Jack. What bad news.

Still though Jackie Boy! I want you back!!!
Get well asap!

Sad news about Wilshere I really rate him as a player just a pity about his injury record.

I hope he comes back fighting and does well for the rest of his career weather it is at Arsenal or not.

I am sure he will recover from this and have a good career somewhere. All the best Jack.

Off topic, but Kylian Mbappe is ripping it up again for Monaco against Dortmund right now. Is it only me who would absolutely love for us to splash the cash and buy him this summer? I’d drop 65M on him in a heartbeat.

That kid is going to have a LOT of options. And unfortunately Arsenal without champions league and with a whole lot of upheaval probably isn’t the most attractive proposition for a player who can probably more or less choose his next club… But yeah, I’d love to see us take a punt as well. Exciting player!

Jack is the new diaby

I genuinely laughed at this 😀

What? No Cazorla in midfield? BFG on bench too?

Get well soon, Jack. Hope to see you in Arsenal colours again next season.

Shame bc like Diaby, he was one of the few who could dribble the ball through the middle.

Looks like Santi bc of age may also suffer from chronic injur. Another of our dribbles.

We will need to add someone who can replicate this skill.

I think it’s stil a good saison for Jack, he stayed fit for most of the campaign and get a lot of games under his belt. The injury is hopefully not as bad as the last one, now that his body seems to be much stronger. I still think he can do something like RvP, he was also a injury prone player…just praying he will never get the same attitude like that dutch piece of…