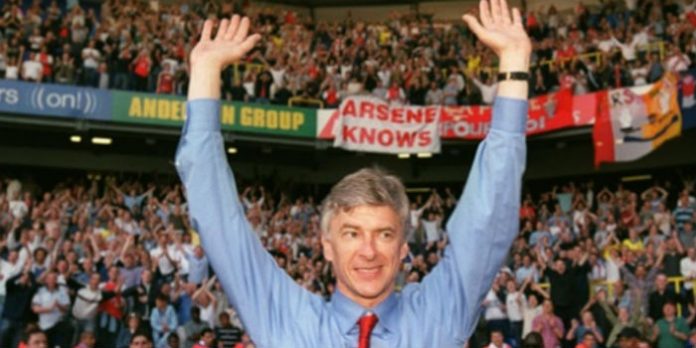 Arsene Wenger reckons Sp*rs’ stadium move might look exciting on paper but in reality, it’ll take a while for the Middlesex outfit to feel at home in their new surroundings.

The 2008 League Cup winners are currently building a new arena so that Daniel Levy can watch NFL games without travelling and could spend next season at Wembley as construction overlaps with the footprint of their current home.

Having steered Arsenal through a stadium move of their own, Wenger predicted that Sp*rs, who have only won the title twice in their history but hosted two of Arsenal’s triumphs, might take a while to build on their ‘prestigious’ history.

“[It’s] very difficult, much more you can imagine,” said Wenger ahead of his 50th North London derby on Sunday.

“First of all, you face financial restrictions, which we did. Overall, it might be less in future because you have more income.

“Secondly because you don’t feel at home like you were before. And you need to recreate a kind of history to feel comfortable and to feel like you play at home. I would say it can take two years [to feel at home].”

On the plus side Sp*rs’ more wealthy fans will get the chance to watch Harry Kane lick windows at close quarters. Not bad for £750 million.

I just feel that spurs have less history to build on, so they have less of a transition to make. Regardless, the transition process is very specific based on the club

Sp*rs building a new stadium seems a lot like polishing a turd.

The Nacho man randy savage will strike again tomorrow….1-0 to the arsenal…sanchez will do a leicester and have kane sent off…???

The Spurs are the better team and have a better manager-It’s pretty clear. Also WHL is the fortress the Emirates stadium should be. Our record against the top sides is poor. All signs point to a beat down. #wengerout #cluelessfool

Why are you angry?

Kroenke out, you mean. Arsene is a great coach and has the players humming again. Be careful what you wish for (Man Utd)

Have the players humming again after losing the tile like he does every season? Seems you are more clueless that Wenger.

I hate it when players lose tiles. Especially when it’s the expensive limited kind and you need every single one for the kitchen and there you are, one short because a player lost one. Not OK!

Whats worse is, it happens every season!

What? We lose tiles every season?

While the board certainly deserves large chunk of the critics directed towards AW, their footballing incompetence/ indifference is not to be used as shield for the systematic tactical and psycological flaws our team repeatedly displays. I personally doubt buying 3-4 players will make much difference. our squad is under achieving and when that happens repeatedly it is primarily a football/sporting managerial root cause.

Players humming again? I can’t believe that less and less gets redemption for Wenger these days. A draw with city and two desperately poor performances which we happened to win. Come on people, looks what’s happening. Look what we’re all doing again. Yes, Stan out. But Wenger creates the mentality. And the mentality has been broken for years. Spurs aren’t a better team individually but they are a better team collectively. That’s Wenger’s fault, no one else’s.

Ann are you ok?are you ok ann?

Only blind gullible Wenger ass licking fools won’t see this. The man is useless and outdated, but he know we have a lot of blind idiots who will still support him even if he takes the club to relegation.

Maybe he has advised the club to wait until after the 2018 World Cup to get another top, top manager?
I don’t mind waiting what with the FA Cup final and top 4 scrap to look forward to. So be patient Kunzel, good things come to those who wait. Easy boy …

go back to arsenal fan tv

Stop talking about your penis.

I don’t know why people are down voting this. It hurts me to say this , but its the truth . anyone saying otherwise is in denial. Pochettino is showing us how to build a team and challenge for title with as little money as possible. Here wenger has splashed the cash and is not even able to finish in top four. The fact that it took wenger years and possibility that he could miss top four to change his tactic itself amazes me as the team has been crying for it for years. To be frank we have never… Read more »

Pochettino looks a promising coach, but he has inherited that squad and he almost sold Son so he got a bit lucky. Yes they have a great squad but I don’t care how good the manager is, he needs his players to perform. You have to say all their players are performing. It’s going to be tough. Coyg!

vertoghen, rose , walker , eriksen , dembele were all underperforming players that was not involved with their respective national teams . two year after pochettino managed them they have become first choice for their respective national teams in whatever positions they are playing . delle ali was plying for mk dons inlower league , harry kane was just an academy player . only hugo lloris was a genuine good player in that squad. there is no denying that pochettino trasnformed this team into a title winning one. wenger has sanchez, ozil, xhaka, mustafi , koscielny , ramsey , genuine… Read more »

Why don’t u go marry spurs then

Why don’t you go and support any midtable club

we will support midtable arsenal. thank you very much.

Get a grip for fucks sake, it’s one season.

which 10 season have they finished above us (that seems to be the topic)?

18 points off the league and 5 points from Top 4 is where we are. But for some strange reason we should be encouraged because Wenger has switched to 3 at the back. Conte switched at the 1st sign of trouble and look where his club is? I actually like Wenger. But he’s so far out of his depth at this point it’s not funny. Opposing fans sing “we want you to stay” cuz they know. THE EMPEROR HAS NO CLOTHES!!

i had hoped this season might be the last of repeated poor performance wengers team give us week in week out , that at last our fans realize that we need to change. but no we will never change. its so dissapointing on so many levels . the club has become a joke and people keep supporting it blindly. i remember during our run of defeats one fan saying wenger will change something to appease the fans and all the fans will forget about arsenals poor run and will keep supporting wenger …….. just like every other season .every season… Read more »

There\'s only one Dennis Bergkamp
Reply to  California Gooner

What a completely classless hashtag…. I don’t have an issue with people wanting wengerout but calling our most successful manager a cluelessfool is disrespectful and just not the Arsenal way.

They might well be a different prospect this season. Pochetino is obviously a fantastic manager. They might be on the verge of a stadium move. They might finish above us for the first time since 1995. They might even win the league for the first time since… whenever the fuck it was. But you must remember one thing… they’re Sp*rs! Dirty, filthy, ugly, knuckle-dragging, shying-away-from-the-electric-light Tottenham! Never envy them, never wish to be them; we are THE ARSENAL!!

Look at your thumbs and realise how dumb most Londoners are. They keep supporting the shit board and manager instead of Arsenal. Maybe deserve a shit team to cheer for. Tottenham or Chelsea fans have all the rights to laugh at these delusional morons. Nah you dont need to go outside just go online and see the biggest joke on every football page. Everyone is laughing at these blind ‘fans’. I was a passionate fan once and because the way the team played and the way the club showed eagerness to win. And this 13 shit years are nowhere near… Read more »

You got my down vote at “The Spurs”……far too much respect shown to that Mickey Mouse outfit in just those two words.

I can believe all the negativity from you bunch! Are you all related to Ty from AFTV? Kroenke is a terrible owner no denying that. But he’s “terrible” because he hasn’t fired Wenger. Wenger is the one who assembled this squad. Wenger has spent more money on players in the last few seasons that Chelsea and Spurs!! Wenger didn’t even attempt to buy Kante!! Then he followed that blunder by spending more on Xhaka!! Really! Ox has been one of the few bright light on this abortion of a season and he just sits. Lucas Perez? Remember when we needed… Read more »

Better team! Really?! This year we all thought we had the team to win it. Yes a few people wanted a world superstar addition but after spending 70m already that was never going to happen. I remember looking at the squad and thinking ‘this is the strongest squad we’ve had for years. The Spuds have a few great players but they are surrounded by mediocrity. You have to give Huge credit to Mo Po who has over delivered. Next season reality will see reality set in because they move to Wembley. If we win the FA Cup and finish in… Read more »

if drawing means totteringham not winning the league and 18 years with no trophy i can live with that but losing and the top 4 dream gone will be a real shitter,and $pur$day nite europa league games means lots of sunday fixtures next season,if we show the desire fom the man city game can go either way,they should not need any motivaton for this derby & Londons bragging rights,just to think we stopped them winning the league would be our trophy

Wenger makes me so exited for the future. So does Kroenke. Arsenal is an ambitous young team with a bright future. Unlike Spuds Chelshyt Liverfool or ManUre we have all the reasons to be exited. Great future with Wenger. My gay unicorns say Messi isnt real.

Wenger knows, he’s had to put up with being skint and having to buy left over crumbs, losing our best players because he had no money to throw around. Just look at how huge this club has become, ok no titles for a good while but we are always at the top and always play CL football. It’s been heart breaking to watch Arsenal this season but all clubs go on a slide now and again, even Barca and Bayern got knocked out of the CL and there’s no crisis. When Arsenal lose a game against any team it’s a… Read more »

Sp*rs, who have only won the title twice in their history but hosted two of Arsenal’s triumphs” – inspired ?

This three at the back nonsense is just a gimmick to compensate for sloppy defenders. In essence, the wing backs do the fullback job, and you end up with a back five. In return, you lose a midfielder, and give up a lot of possession in the middle of the pitch. It is not a panacea.

If you look at clubs who have moved to new stadiums you will find that with very rare exceptions most have struggled badly in their first season or two there in fact many have been relegated during that time frame ,Southampton for one that comes to mind look also at how West Ham have struggled this season!