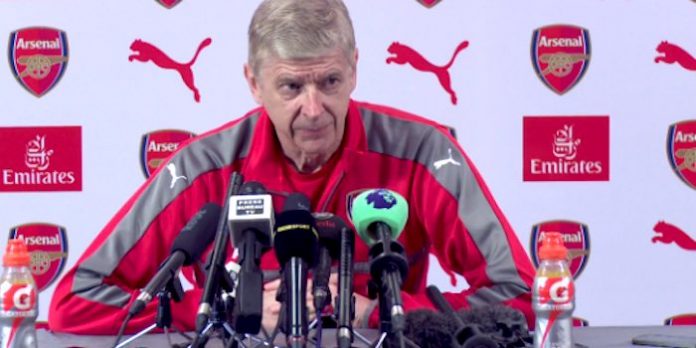 After three fantastic wins in seven days, culminating in that very enjoyable 4-1 win over Stoke at the weekend, Arsenal now face more mundane opposition as they prepare to face relegated Sunderland at home on Tuesday night.

David Moyes side have been poor all season, but any lack of focus from the Gunners could prove costly against a side with nothing to lose.

Ahead of the game, Arsene Wenger provided the latest team news update, and there’s mixed news regarding Laurent Koscielny and Alexis Sanchez.

“We have a problem with Koscielny from Stoke,” he said. “He has a recurrence of his calf problem that kept him out last week. We’ll see how he’s recovered today.

“Gibbs is available again, Chamberlain is still out. ”

With regard to Sanchez, who came off against Stoke after scoring a crucial goal, he’s going to have a medical check today.

“Alexis Sanchez will have a test today,” said Wenger. “Yesterday, it didn’t look too good, but with him you never know. It was just a kick, so it’s possible that he recovers for tomorrow.

“Everybody else is ok.”

If Kosc is crocked I don’t fancy our FA cup chances at all. They were slim enough as it was.

all our aging stars have calves/heels problem

He’s had a known achilles issues since 2013. Also, it’s a game where you constantly sprint from rest, and change directions whilst doing so. The only consequence of such repeated movements is that everything in your body from the knee down goes to shit. Not a coincidence.

Please rest Sanchez and Koscielny.
We’ll get through this without them.
Qualification for the CL, is out of our hands anyway.
The F.a cup is the most important thing right now.

Please don’t rush them back, they’ll be needed at Wembley.

As long as they have the right mentality (ahem, looking at you, M. Wenger), whatever team we field shouldn’t have any trouble on Tuesday.

Does anyone know if Mustafi is suspended (for 10 yellow cards)?

Could be a problem if he and Kos are out, plus Alexis too.

Nope – the cutoff for that suspension was the second Sunday in April.

For rotation purposes, time to give Iwobi a chance?

He could easily play in one of the Alexis/Ozil roles

Yes, but only when the manager decides to move him centrally on a more consistent basis

We need to win this one 6-0 to kill the Scousers goal difference.

Santi\'s Flip Flop
Reply to  Me So Hornsey

It’s City’s GD we need to worry about. We go above Liverpool on results alone. City could do us with their superior GD and still lose a game.

Kwame Ampadu Down
Reply to  Me So Hornsey

Goal difference will almost certainly be irrelevant in terms of Liverpool. If our GD is going to be the key, it’ll be in terms of Man City

Should have enough to still put a few past those wasters

Lucas in the starting Xl? This cannot be an Arsene Wenger team, can it??!
But the prospect of Lucas and Welbz interlinking is too mouth-watering.
We all can dream atleast! 🙂

We would probably see coq in midfield and Ramsey in akexis’s role or maybe iwobi back in the squad!

The poor guy needs another chance! Hasn’t put a foot wrong for us yet.

He seems to score for fun, so let him put a couple past John O’Shea and friends.

It is difficult to be good without having played a game for so long. If Perez is average, I will understand it.

Chances are we’ll play Iwobi or Theo ahead of Lucas. Or play Giroud & Welbeck as a front 2 with Ozil behind

I want to see how iwobi does in the Alexis role. I think no 10 role is perfect for him

We should play Ospina, Elneny (Xhaka), Iwobi (Ozil), Walcott, Gibbs & Welbeck with Perez (as he is just back from injury) to come on for Walcott. 4th place is almost out of our reach and even more so, our main challenge would be Everton – Ronald Koeman is becoming Wenger’s new boogeyman! So we should let these guys play get the rest of them for Everton and FA Final. In fact, depending on how Perez plays I would keep him as the winger option for FA cup final with Sanchez in front.

Fingers crossed Liverpool have ended Wenger’s career. Will be buying a big round for everyone at my local if this deceitful has-been gets the sack.

Koscielny is from Stoke?! Who knew….

Kos is the only Remain voter in the whole of Mordor, sorry Stoke…

It’s Sunderland, i think they’re the easiest team in PL right now, we should win even without Sanchez and Kos, moreover we play in Emirates. In this game i hope we can see Perez though, the guy didn’t have a chance to play, if he’s fit then play him even as a subtitute in min 70, i want to see his play, still believe he’s better than Walcott/Iwobi as a winger.