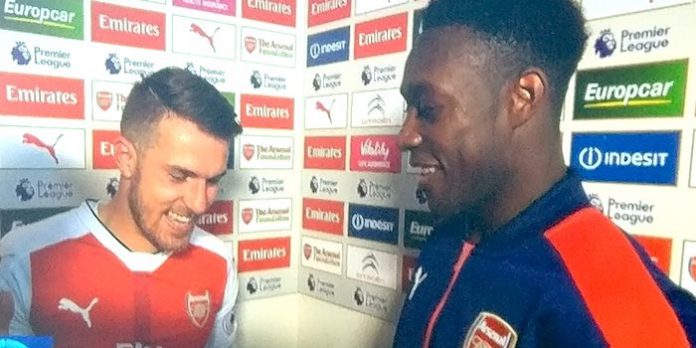 Man of the match Aaron Ramsey and goalscorer Danny Welbeck spoke to Sky Sports after the 2-0 win over Man Utd at the Emirates this afternoon. Here’s what they had to say.

Extra special for Welbeck to score against his old club, but what did it mean for the team?

It was really important for us to get the victory today, obviously, with our position in the table, we need to be further up there. It’s something we’re all disappointed about but to get the win and hopefully give us a good end to the season.

Aaron, you’re Man of the Match, does the formation bring out the best in you?

I felt good in the games I’ve been playing in, I’ve been getting into goal scoring positions and playing that formation gives me a bit more freedom. But it’s a formation we’re still working on, we showed today we can be effective using it. We’re delighted for ourselves but also for the fans because they deserved that today, to go home with a smile on their faces.

Danny, you love United, but you keep doing it to them!

Obviously I grew up there, so it’s a special place in my life, but once you get out on that pitch it’s business and I want to help get the points for the team. I think we did that today.

You smiled and celebrated.

Yeah, when you score you’ve got to happy, so it’s only normal.

A good day for top four hopes, is it still on?

I said a few weeks ago we had to win every game and we didn’t do that against Tottenham, so let’s just build on this now and finish the season strongly. Hopefully win them all and see where that takes us.

Read the match report and see the goals here

It’s so weird before the game a fellow Gooner had commented on one of the comment sections here that ‘watch Ramsey and Welbeck have a good game’
Crazy how he called it!
*Not sure of his exact words

Yeah I remember too great call

Glad to see Welbeck scoring again. I hope this lad gets a full (normal) pre-season, and then gets the 20+ goals his talent, application and dedication deserve. He’s had a lot of bad luck with injuries since he joined us

An entire pre-season and full season of no injuries. That’s what I want for him. And in truth I don’t want it because I truly believe he’s got what it takes to be an Arsenal 1st choice CF. I want it because he’s one of the most likeable, classy, hardworking players in the league. It’s impossible not to have a bit of man-love for him.

I loved the new tactics of not giving the ball away. Thank you Alexis, Ramsey, Ox, Ozil,…Wenger could be on to something here??

It’s easy to keep the ball when the opponent aren’t pressing you all the time, you know.

I thought Welbeck doesn’t give us as much ‘mobility’ as many presume. He also largely lacks composure. BUT starting him against the old employer was the right thing and he seems to have a habit against them now. Hopefully the well taken goal will ignite better performances down the line because thus far he has been wasteful. Ramsey and the midfield as a whole I thought found good balance today. It wasn’t only Ramsey but Granit had a very good game and well deserved the luck he created for himself with the effort. Also Ozil whom I thought was influential… Read more »

I like Welbeck but we can still do better with chance creation and decision making when going forward. This display was encouraging though. We can do a lot better though

not sure why this has 21 downvotes

Gibbs got into so many good positions, but was also so wasteful. Every time he was on the ball, I gradually started to hope he would pass it than cross or dribble with it.

Welbeck’s pace and strength is great though. He’s currently our only striker with such attributes, and helps a lot in jostling for the ball in the final third.

Odd how there was zero eye contact between them

I noticed that too, was a bit weird

Ramsey looked poor live but good on the highlights??

No neck
Reply to  Peter

I was sure the commentators were giving him shit. Then give him the tch ball.