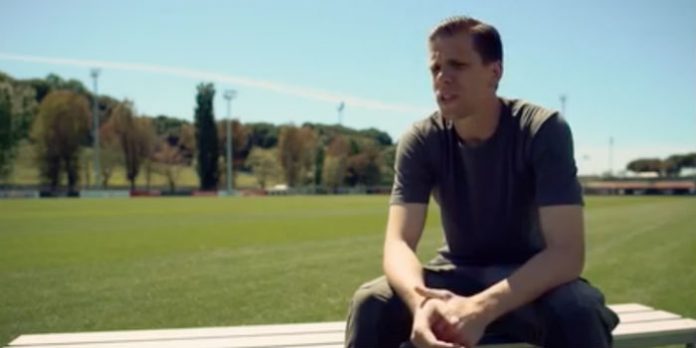 Wojciech Szczesny says he’d love to return to Arsenal at the end of his latest loan spell at Roma but will wait until the end of the season before making a decision about his future.

Speaking to BT Sport, the Poland international reflected on his two years in the Italian capital, admitting the chance to play in a different league has helped him mature as a player.

I came here after a terrible season. I was in a bad moment. It was a good chance for me to re-launch my career. Coming here and having a fresh start, new challenges, new league helped me to mature a little bit as a player.

Is this your best season in your career?

You’ve got 14 clean sheets this season. Are you the best goalkeeper in Serie A at the moment?

It’s a big statement to make. There are goalkeepers on an unbelievable level here. I wouldn’t dare compare myself to Buffon, not as a man and not as a keeper. I’d never make that statement, no.

What do you make of Roma’s season?

It’s been a little bit up and down, but mostly up. In a few important moments we lost important games that we shouldn’t have lost. I wasn’t playing but we got knocked out of the Europa League in a way that shouldn’t happened. There were were some bad games, but when I look at the season overall we’ve been very consistent.

What do you think is the difference between Roma and Juve?

I don’t ever want to say that my team is missing something. Roma can absolutely compete at the top level in Italy and win trophies. The size of their squad is a difference, they have 25 players that are ready to play every week and that makes a difference over a season. It looks like they always know they are going to win. They have a mentality of real winners. I really appreciate that as a professional and when things don’t go well, they still come out on top. That’s made a difference but in terms of quality, I don’t see anything that we’re missing.

It’s Francesco Totti’s final year, what’s it been like spending these two years with him?

A little bit unreal. He’s a player that I watched as a little kid. As a young kid of eight or 10 years of age you never dreamed that you’ll share a dressing room with those kinds of players. It was the same with Buffon when I first played against him. I never thought I’d get the chance to play such a legend. It’s been unreal.

I’m happy here. I feel I’ve grown as a goalkeeper but for me the time to make a decision will come in the summer. For now I’m an Arsenal player, as soon as my loan finishes, I have to come back [to London]. I’ve always said I’d love to be back there. Like I said, what will happen definitely won’t be decided now but in a month or two months time.

Mkhitaryan tells Arsenal to do deal with Roma

I love Szcz. It would be great to see him come back and play well and become our top boy in goal.

Agreed. Sounds like he has grown up. Plus ‘I’d love to be back there’ is great.

Him and Cech fighting for the goalkeeping slot next season?

” For now I’m an Arsenal player, as soon as my loan finishes, I have to come back [to London].”

This sounds professional and polite, but not full of enthusiasm.

I think it’s a case of keeping both sets of fans happy as he’s genuinely unsure where he’ll be next season.
I’d welcome him back happily if Ospina moves on as expected.

Kwame Ampadu Down
Reply to  JustBrowsing

I don’t think Ches should be coming back cos Ospina is leaving. Ospina should be leaving cos Ches is coming back, and he’s simply a better keeper than Ospina.

“I’ve always said I’d love to be back there”

Why selectively and disingenuously quote when literally everyone here can read the article for themselves? do one

Many people (including myself) would favor Wojciech’s return to Arsenal. The question is, in what capacity? Splitting the tournaments between goalkeepers is always a temporary fix and shouldn’t be carried on into the next season. Benching a goalkeeper with plenty of game time in last 2 seasons and approaching his prime makes no sense. Giving up on Cech as no 1 sounds a bit premature, even though his form has been a bit too patchy for my liking. It looks to me as though they would start competing for starting XI in preseason from scratch, the winner takes it all… Read more »

We won titles with Lehman therefore we will win with Szczesny. Both are talented and crazy GK. One or two red cards a year but Wojciech will steal games against big teams and stop more penalty kicks than Cech.

Lehmann was eccentric but only got one red card at Arsenal.

In the champions league final of all games 😛

You just had to remind us of that red card.

For me, and having watched a few Roma games, he still parries too many shots back into the danger zone to be able to justify taking Cech’s shirt. A great shot stopper – we already knew that. But the best keepers are the ones that make the potentially tricky moments look easy.

Sometimes that is the most efficient way of dealing with a shot though. Hard to argue he hasn’t improved during his loan spell which is the point of those

And there was me thinking his Arsenal career had already gone up in smoke. Hopefully he’s given another chance

Bring him back Arsene, please!

A little bit disappointed that he didn’t call himself TGGTEL, but I’m going to ignore that and hope he returns back to Arsenal starting 11. At the moment there’s no competition for Cech, yes Ospina is good but it was predecided way before that he would be cup keeper only. So technically no competition for Cech in the PL games

Time to bring back our number 1!
Let him compete with Cech, i think he will take over the regular position soon enough.

Would love to see him return. But as someone already commented, would be premature to chuck Cech out just yet, but would also be very damaging to bench a guy who’s played past 2 seasons and hit his prime…tough call to make #wengerIn

With Emi on his way up, he’ll have a tough fight to be Petr’s backup; even with his recent top level experience.

Be good to have him back as long as he has learnt to cut out the Neuerisms.

Szsc is more mature now thanks to loan spells.

I think he should come back into the fold and be groomed with tutelage of Cech to eventually be number one.

It should be competition between Szsc and Cech then.

He’s also as good as a local lad for us.

To be fair he has been better than cech this season. So I don’t see why not.