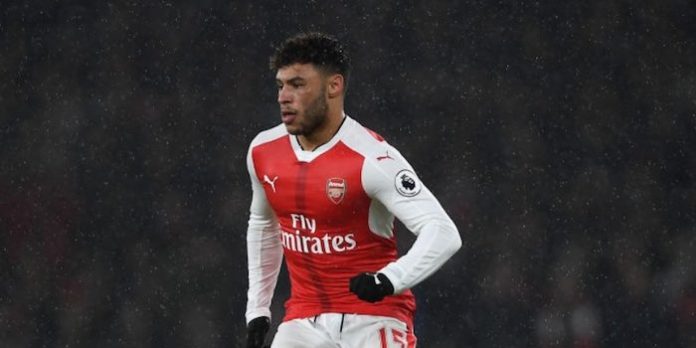 The Gunners come into this game on the back of two 2-0 wins – over Man United and Southampton – and need to win to keep any chance of a top four finish alive.

Alex Oxlade-Chamberlain, who was taken off after 35 minutes against the Saints on Wednesday, has a ‘minor’ hamstring problem with the boss revealing: “It was tight, but it was more fatigue.”

You’d have to think it’s unlikely he’ll be risked given we can call on Hector Bellerin to fill in.

Elsewhere, Laurent Koscielny, who missed Wednesday’s win, is on the mend. “He’s got a small chance [for Saturday]. He was not far. He practised on Tuesday but it was risky to play him at Southampton.”

Having spoken to the press on Friday, Tuesday and Wednesday, it looks as though Wenger was allowed to skip another press conference today. It’s unclear whether the above updates were given to the club’s editorial team today or if they were part of the post-game sit down with the media on Wednesday.

No Ozil in the squad: West Brom v Arsenal teams

Chambers on his comeback and his preferred position

Good that Kos is on the mend and the Ox too. We will need them soon.

Hopefully we will have enough for the three points at Stoke.

Same team as for United imo. With Hector rather than the Ox of course. And Giroud to score late on.

Normally I’d say keep kos for the midweek game but there’ll be no need for midweek midweek if we don’t win this one. Play a back 3 of Gabriel Kos n mustafi, push monreal up @ LWB (wish we could rest him altogether)
Ramsey must start (then rested in midweek), Bell for Ox and the rest is ‘as you where’..

I’d have holding over Gabriel now whenever given the choice. Just don’t trust the latter whatsoever.

Should be holding koscielny and mustafi

Same team that won against Southampton pls. But if Kos is fit then play him instead of Gibbs and put Monreal as LWB!

Hector is a more than capable fill-in… Hopefully he has a bit of hairloss before the game. Or at least starts playing like Ramos (minus the whole being a bit of a cunt thing)

I’d still gladly take Ramos, any day of the week!

I thought that Holding,Mustafia and Monreal did a good job an i would not change them, hold Kos back in case we need hm late in the game.
I dont know about anybody else but I have gut feeling that after the hype over the last month we will finish 4th and Alexis,Ozil and the Ox will sign new contracts
I just wish I could get a bet on it.

Mel
Reply to  Bob A

Bergy
Reply to  Bob A

With Utd. winning the Europa and missing out on CL? May need to finish 3rd now!

Greengrass
Reply to  Bob A

Go into a paddy power shop and they’ll ring and get a price for you. They’d take a bet on two flies racing up a wall

maxoys45
Reply to  Bob A

Got to a bookies, you could definitely bet on that.

Kampala gooner
Reply to  Bob A

@ Bob A u right on the money. If u do find a place though taking that bet please come back on here and spread the new.

If we could get fabinho or bakayoko next season, that formation seems quite tempting

NoT Forgetting Higuain and Julian Draxler and ofcourse Aubameyang too…. Oh i see the papers selling like crazy already

Careful! The Sun may use you as a source

Here, I’ll even write the headlines for them:

“Yo! Arsenal look to shore things up at the Bak”

people need to get over bellerins hair….

Anyone knows how Iwobi is doing?

Have to win final three and pray Liverpool drops points vs West Ham. Not likely to catch City on GD even if they drop three points so our best bet is for Liverpool to loss or draw vs WH this weekend at WH and our winning out (which of course is not a given).

not so fed up
Reply to  Mark

Westham like to make Liverpoo suffer for cheating them out of the FA cup some years back lol my hammers mate loathes that lot and still bangs on about Stevie G being a BLEEP!!!

I wouldn’t risk the Ox. Besides, whilst he has been good in general particularly going forward, he is still shaky sometimes defensively mostly bc he still has to get use to his role. Bellerin came on and did decent IMO, put in some good crosses for us. he is also more secure at the back. I expect with game time, he will continue to regain form. As far as Koscielny is concern, Mustafi filled in well. We won’t hear it from the likes of certain statistic obssessed bloggers but he put in I believe 9 clearances and intercepts against Soton.… Read more »