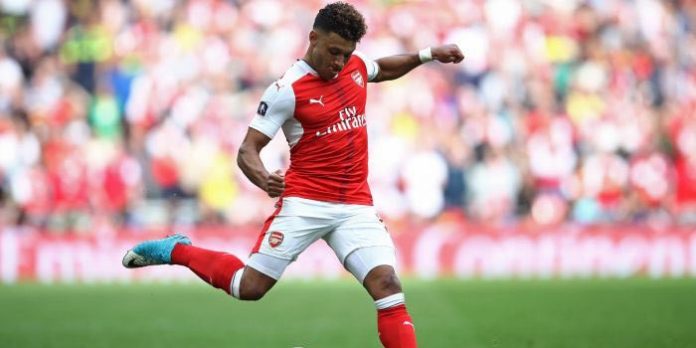 Ahead of England’s game against France in Paris tonight, Alex Oxlade-Chamberlain has had his say on two of Arsenal’s transfer targets this summer.

We know of a club record bid for the 18 year old Monaco prodigy, while reports say the Gunners have been quoted a price of around £60m for the Lyon striker.

Video: Is Alexandre Lacazette worth £60 million?

The Ox was asked about them both, and he declared himself a fan of both.

“He [Mbappe] really is a quality player,” he said. “I feel the same about Lacazette. I have seen him for a good few years now and he is always scoring goals.

“I’m looking forward to playing against them as well as the rest of the French players.

“They have a really strong squad, right from the back all the way up to the front, all of different ages.

“France have a lot of strength in depth, so it will be a good challenge for myself and for us as a team as well.”

The 23 year old is set to hand the Gunners a boost by agreeing new terms with the club and turning down a move to Liverpool.

In this summer of anxiety, the Ox renewing his contract will be a welcome and much needed relief

Fifa wouldn’t be the same without him

Agreed, need to keep the Ox.

I suspect it may also affect potential moves for players. We need to secure him first.

Actually, the story about him renewing his contract is more welcome than anything about the two, not that it would be a bad thing to sign either of them. I would feel robbed to sign them at the quoted prices though. Despite his obvious talents, Sanchez has been quite prolific and did not cost us that much.

Ox is much more talented than M’bappe. He just needs to keep himself fit and be more consistent in the final third. Having said that M’bappe is a great finisher and is highly intelligent.

I’m always dubious about people’s knowledge of a player, when they give vagues Owen-esque cliché’s to summarise them such as “great finisher” and “highly intelligent”.

Might as well finish the Owen Bingo with “strong” “box to box” and “good tackler”.

I accept that my comment was penny plain but, please don’t compare me to that cunt Owen. Anyways, Kaius nailed it.

Thanks mate. I do agree with you in the sense that Ox is incredibly versatile and that in itself is a major indication of his talent.

Ox has to visualize the move in his head before he takes people on. M’bappe does it while sprinting like you said. That’s why M’bappe is more intelligent and the Ox we know before 16-17 usually ends up dribbling all the way to the touchline. But, i feel Ox executes his dribbles more convincingly when he gets it right which means he has it in him. He just needs to stay fit and deliver the end product. You also mentioned about Ox letting the ball away while sprinting. That’s exactly what happened when we played against Barcelona in 15/16…Ox’s touch… Read more »

Yeah, the other time was against Aston Villa in the first bloody game of the season when he was at full sprint, took a loose touch giving the defender the option to go for the sliding tackle and we didn’t see him again for about 9 months.

Rosicky used to say his “football age” was two years less than his actual age because of his time spent injured and I think the same is true for Ox.

Ox has excellent ball control for a British player.

He is lacking in final product, either in distribution (which is more a consistency issue because he has delivered some great assists) or finishing.

I think he replicates for us plenty of Walcott plus some since Theo is actually the one who tends to push the ball and run to it.

Ox keeps the ball on a tight leash and runs with the ball.

Not sure what some are seeing here.;)

He’s no El Neny though

A Gorilla
Reply to  ramgooner

His thesis on nano-technology is impressive, I will grant you that.

Mbappe’s ability to keep control of the ball at full sprinting speed is really underrated. He didn’t do it much in the Champions league but he was bullying slower defenders in league games.

Early on Oxlade-Chamberlain suffered a couple of bad injuries because he’d let the ball get away from him when sprinting but he’s much better at it now and much more dangerous because of it. Walcott of course is the perfect example of how useless outright speed is when you don’t have the ball control to go with it.

Spot on. Speed without control is nothing. Watch how the ball ‘stuck’ to Mbappe foot while he runs. His ball control is comparable to Messi and Ronaldo imo.

I don’t think that’s an exaggeration at all. Mbappe’s ability to keep possession of the ball against Champions League-level defenders is a big factor in his record price tag.

Mbappe is a King Henry in the making man, he just lacks Thierry’s power at the moment. Ox is good though

Mbappe is a much better player.

I love the ox..hope he fulfills his potential with us

Just the good ones

And we’re apparently getting 10 times less for Ospina? We gotta raise our demands now surely, the market for goalies has gone mad too. Also, 15M for Szczesny all of a sudden seems like a joke as well.

And so isn’t that bloke from Benfica who went to City for 40M€.

Szesz is a home grown player though so he counts towards the quota. Plz plz plz keep scesz!!!!!

Szczesny would be consider own grown I’d think

Also, 15M for Szczesny all of a sudden seems like a joke as well.

Not all that sudden, mate.

Finally, The OX has taken a step forward last season.
Personally, seeing him fulfill his full potential in Arsenal colours in the near future excites me more than the thought of any player we might bring in this summer.

The Ox has to be our most likeable player.
If he can stay fit I think he’s more than capable of bagging double figures in goals+assists.
I think this new system really suits the players we have.
If we brought Szczesny back and signed Mbappe I’d fancy us to compete.
I’ve been critical of AW at times, particularly trying to fit square pegs in round holes but I’m confident he’s got this change in system right.
A lot will depend on keeping the Ox+Rambo fit.

No way
Reply to  Rich

Surely the most likable player is santi

When it comes down to it I would rather have Aubameyang for £60m or Mbappé for £100m, but I would definitely prefer Lacazette for £60m in our squad than going into the season with Giroud, Welbeck and Lucas.

I meant to post this one on the gunnervlog video sorry!

Well it might hurt just a little the first time, but he’ll soon get used to it.

No, no. We want you here

Mbappe is bound to Madrid and Lacazette to the other Madrid. Thats what i heard. I think its going to be hard summer for us.

I thought the other Madrid had a transfer ban

I heard that he will wait until the ban is over which is jan 2018. So we may have chance to change his mind

But Giroud has kept Lacazette on the bench in the national team.

Respect to the Ox for rejecting a move to Liverpool. I wish the other notable 2 would sign da ting.

Friendly or not, England playing France in Paris is going to be one hell of a game. Can’t wait

Assuming Sanchez departs for more dosh rather than staying at Arsenal, who can fill his Boots?

No way
Reply to  Dolphin

Most people as his feet are rather on the small side

I’m sure Puss in boots would do a fantastic job

Just out of curiosity, what are people’s thoughts on the ox playing just behind the striker in a 3-4-2-1? Obviously he wouldn’t be a direct replacement for sanchez, but could be good for Europa League in that position.
He has the power, dribbling and work rate. And his composure has improved from being at cm.
Mainly it would just be a way to get bellerin and the ox in the same team for this formation

The Ox is only 23 can’t believe it. Still plenty of time ahead of him to develop into a full time beast at Arsenal.To let him go and do that somewhere else especially another premier league team will be total madness.

Hmmmm….. Hope we sign everyone including fancy sport wear company!

I think the current Mbappe pricing is priced to keep others out of reach. The clubs vying basically are saying “If we can’t have him, you can’t” Monaco are also in no rush to sell but at some point they may have to decide whether to take advantage of over hype at the moment and sell or wait another season with risk to say Mbappe dropping form or getting injured (Remember Pato) Lacazette is like Aubameyang a decent striker by any means but I think Wenger has been holding out for someone like Mbappe whom he could develop into the… Read more »