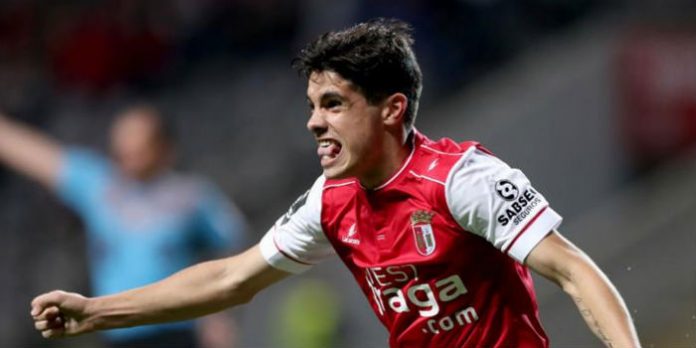 According to Portuguese publication A Bola, Arsenal have had a €15 million bid for Pedro Neto rejected by Braga.

The 17-year-old winger, who is the second youngest player to ever score in the Portuguese top flight, apparently has a buyout clause of €20 million and is also being courted by Barcelona.

After penning a contract renewal in March, Neto is tied to Braga until 2020.

We haven’t watched him play but, given his age and experience, we’re assuming that this lad is more a future prospect rather than a finished product.

We can’t shake the feeling that Arsenal are probably being used as a pawn in this situation, so we’re going with a high poo-o-meter rating.

Willock closing in on Benfica switch

I don’t know how reliable the publication is or much about the player….but doesn’t this tie in with what AW said about signing top prospects before their value jumps up like Mbappe and countless others we missed out on?

For every Mbappe you have multiple Park chu Youngs and Sanogos

Agreed but Wenger does forget that within a few years of him cherry picking Europe’s talent, all clubs of any distinction invested in a scouting network. Apart from a pretty dated reputation of us being good at developing players (and ask Ramsey, Walcott, the Ox, Wilshere about that) we’re just another team vying for these players. And thanks to the internet, there are few secrets left as regards hidden gems. Wenger still expects a monopoly on all talent, as though it is our god given right to sign all bright prospects. The only players he’s successfully scouted in recent years… Read more »

I dunno, Holding for £2m was pretty good. Gnabry was a good buy as well. Plus you never know how the likes of Jeff, Reiss Nelson, Bielik, Nwakali will turn out…

Maybe I am playing devils advocate somewhat. But the weeks are flying by, weeks that City have bought Ederson and Silva (70m), Liverpool Salah (34m), United Linderlof (30m) and Chelsea seem to have Lukaku and Alex Sandro deals very much in the latter stages of negotiations. And what are we doing? Again? Chasing shadows and being pushed around the negotiating table. Preseason in less than three weeks. It’s just the same thing, lessons never learned on the field or off. I love and am proud of our constant optimism, god knows we’ve needed it, but we deserve a bit better,… Read more »

Did I miss something, or is it still, erm, June?

Preseason in 17 days. Tell you what, if we start this season with most of our summer business tied up, I’ll make a full and frank apology. But don’t hold your breathe when we send Wenger and Gazidis out to France to lure the potentially most expensive player in the world to join us instead of Madrid. Maybe we are smoking something…

Must admit I share some of your pessimism. Especially concerning moving current players on. I wouldn’t be surprised if we go into the new season with Debuchy and Gibbs etc on the books and with major contracts still unsigned.

I genuinely hope I’m wrong, but just going by past experience I’m not too hopeful we’ll make the tough decisions that need to be made.

Does Kolasinic, Left back of the year in the Bundesliga, not count because we got him for free? More impressive signing than Linderof, not sure why he gets a special mention.

“Chelsea seem to have” but they have signed NOBODY!!!

If ur focusing on numbers, we’ve signed 1, Chelsea 0

1 nil to the arsenal

Yeah but they finished 18 points above us so I’m guessing they probably still have the slightly more cohesive squad.

Should we give up?
Or should we just keep chasing pavements?
Even if negotiations lead nowhere?

Bellerin? Iwobi?
How quickly we forget. But hey, the kid next door has a shiny new toy and I want one else I’ll thcweam and thcweam…

I think I’m entitled to raise concerns about our transfer inactivity that has cost us season after season without being patronised. I’m sorry that we are all wearing rose tinted glasses again because we won a game. I find it just as juvenile to sit around gossiping about how great it’s going to be next season when we are losing our best player and don’t seem to be close to signing a replacement. But you can jump on the bandwagon come September mate, I’ll see you there.

Come on, you’ve been here long enough to know the drill.

99% of the people currently on a high of optimism and shooting anyone down for being negative, I guarantee will be the first to be frothing at the teeth at the first loss, chanting Wenger Out and proclaiming how they were nervous because we hadn’t bought anyone in the summer.

It’s all part of the cycle.

Hello from the Arsenal siiiiiiiiiiiide,
We’ve seen this story a thousand tiiiiiiiiiimes.

honestly you are entitled nothing. only thing coming from you is just whining.

Not patronising you mate, although I do pity you if you can’t just chill the fuck out and not worry that your football team hasn’t blown its transfer budget a mere 17 days before pre-season starts.

Clearly we have lots of fingers in lots of pies. Hopefully this time we don’t come away with burnt fingers and a plate full of crumbs.

True. The publication was A Bola, after all.

Wonder when clubs like Braga started turning down bids worth 15 million..if it is true?
Wonder if their entire club’s even worth that much amount of money! Gosh..football these days!

S.C.braga is a big enough club at portugal and were winners of portugal’s Fa cup equivalent…they have every right to command a good fee on their best upcoming youngsters…not everyone’s naive like arsenal to give away gnabry’s and willock for peanuts..They have a connection with arsenal though

Alright mate! I do know who Bragga are..!
Do you even realise 17 million for a seventeen year old is a million times multiplied by his age?
My question here is when did clubs like Bragga(The world beaters..who have just won the f*ck lot) earn the bragging rights to turn down bids worth 17 million for 17 year old prodigies..? Oh what irony!

You know what..you are right! Never did I find the need to waste my precious little time to learn the History of the greatest ever club the world has ever seen(Braga).
I am sure you are the sort of guys because of whom..people like Aulas even exist. Good luck with ya mate!
It is always Arsenal’s fault. Don’t worry.✌?

What is your logic here?
That’s like saying when did we earn the right to turn down bids for players we want to keep?

In a world where Mbappe is being banded about for €100mil, why dafuq should they just accept the first offer they receive? Because we’re Arsenal?

I hope they turn out to be good players just because I love the sport but you can’t keep every youngster happy.

If the guy had a buy our clause of 20m why would we faff around offering less? Smells like agent poop.

because we might not think he is worth more

Because the release clause is only if the club selling want to stick to it. Players go (or used to as recently as last year) regularly below a listed release clause because the selling club wants some money and the player wants to go. This might be a way to turn both their heads.

Of course this is just paper talk so we very well might not have done anything of the sort.

i hope he won’t turn up to be the next Ronaldo and Wenger remind us he almost signed him ten years from now.

He looks like a typical Wenger signing who’ll be sent out on loan and then sold at a loss!

This used to be a typical Wenger signing. Young talented and obscure. Now I have no idea what Arsenal is doing.

If there is a buyout clause don’t they have to sell if the players wants to go so if it’s true just pay the fee and then talk to the player rather than being under the clause.

ClockEndRider
Reply to  Wright on the money

Exactly. Some people just don’t get it….

mpls
Reply to  Wright on the money

If Arsenal really want him they can still do so. And maybe this has turned the player’s head a bit. Or maybe it’s just a story.

Danny
Reply to  Wright on the money

So don’t bother with negotiating? Don’t test the clubs resolve with a cheeky bid? Just give them the full amount, yeah. Fuck it, it’s only money, and that’s what United, Chelsea and City would do. What are you smoking exactly? If I’m going to follow this club, and invest my time in it, I at the very least want it to operate in something that resembles the real world.

how to use arsenal like a pawn when trying to get a big move for your client: put about a fake but believable bid – something well shy of a known release clause for a player on a long contract.

done. even people inside arsenal hq probably now think we’re in for him.

We got bigger problems at the moment. Got bigger signings and bigger contracts to resolve.

I think the newspaper should be rebranded: E Bola