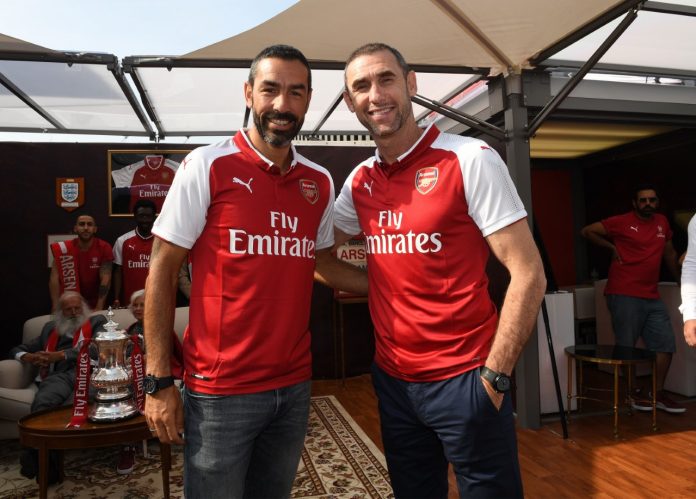 It may or may not have escaped your notice that Arsenal launched their new home kit this morning in London.  Tim Stillman was on hand for Arseblog News and the Saharan temperatures granted him every excuse he needed to sweat profusely and appear weak at the knees as he interviewed Arsenal superhunk Robert Pires at the launch.

On a swelteringly hot day in London, your correspondent was fanning himself vigorously long before the impossibly charming Robert Pires breezed onto the scene. The “man that turned a thousand men” had his say on Mbappe, Lemar, his dream of becoming a Sporting Director at Arsenal and why he turned down Real Madrid to come to N5 all those years ago.

Pires has gone on record previously about his desire to take on a kind of Sporting Director role at the club and the Frenchman was unequivocal on his ambitions, “I don’t know if it will happen soon, but this is my dream because I love Arsenal. I have a great relationship with the club and with Arsene Wenger, but it’s not a priority at the moment. But maybe one day.”

When quizzed on his personal list of transfer targets, Pires is very much minded to raid the French market, “I have Mbappe, I have Lemar, I have Lacazette, I have Dembele on my list. But this is just MY list,” Robert laughs, “I trust the manager!” Sounds like a pretty good pitch for the Sporting Director role to me…..

Arsenal have been linked with Monaco’s prodigious teenage striker Kylian Mbappe and Pires was bullish about the Gunners’ chances of landing him, “I am always confident! I think now in the Premier League any transfer is possible because of the money here, just look at Paul Pogba last summer.

“I think Arsenal can spend a lot of money on one player, but lots of clubs want Mbappe, like Madrid. I think the fight with top clubs in Europe will be tough and the competition will be very high though,” he reflects.

Robert of course was one player that eschewed the interest of Real Madrid to come to Arsenal in the summer of 2000. Pires’ mother is Spanish, so the temptation to join Madrid was strong.

But he says Arsene Wenger convinced him to turn down one of his favourite clubs from boyhood, “Real Madrid, Juventus and Arsenal were all interested,” Robert reveals, “So it was a very difficult choice. But I chose Arsenal because Wenger called me personally just before Euro 2000 in Belgium. When you are a player, it is very important to talk with the manager and hear his ideas. That’s why I chose Arsenal, Arsene convinced me.”

Pires admits that he sees a little of himself in Monaco’s Thomas Lemar too, another player that forms part of his fantasy Arsenal shopping list, “He can play on the left and the right, he has great ability with the ball. He can cross and is very good at providing assists. I think he could fit in in the Premier League, but at especially at Arsenal!” he adds with a glint in his eye. Oh man, his eyes…….”But I don’t know if he is a young Pires,” he laughs, “Why not?!”

Pires is a player that I always maintain has never been replaced at Arsenal. Not purely because of his quality- such talent is scarcely replaceable in a like for like sense. But nobody has quite made that role of wandering in from the left and providing regular assists and goals their own since 2006. Rosicky was injured and then moved into the centre, whilst Nasri briefly threatened to pinch that crown in 2010.

Alex Iwobi has shown promise in a similar role this season and Pires admits that he has been impressed by the Nigerian, “He is very young and it was his first full season and he was very impressive,” the Invincible reflects, “But he has to do it game after game, season after season. I think he is a really good type of player for a team like Arsenal.”

Pires still trains with Arsenal regularly and he has struck up a friendship with Alexis Sanchez. On the prospect of his and Mesut Özil’s contracts, the Frenchman is hopeful, “I hope they will stay. I love the guys and I love them as players. They are important not just for their quality, but for the stability of the club. Just as important as finding new players this summer is extending their contracts. But honestly, I don’t know what is happening with that.”

Back in 2006, Pires reached a contractual contretemps of his own with the club. At the time, the Gunners had a policy of only offering 1 year contracts to players over 32. Pires wanted a two year deal, an impasse was reached and he eventually signed for Villarreal on a free transfer. Le Bob is adamant that the length of the deal was the only sticking point and that he would have had no hesitation in signing a 24 month contract.

‘When you left Arsenal in 2006’, I begin, “Oooooh! Leaving Arsenal was very difficult for me!” he interrupts, clearly still wincing at the memory. “I had six great seasons as a player. You can see I am still here!” he jokes, “In training and doing ambassadorial work. If Arsenal had offered me two years, I would have stayed,” he asserts, emphatically.

“But you know, this is the life of a footballer,” Pires counters philosophically, “It was a very, very hard decision but I have no regrets and no hard feelings. I found a great club at Arsenal- a second family really. That is why I can still work with the club today.” Robert’s son is currently playing for the Arsenal U-9s, so maybe another Pires will be launching the new home shirt in 2027-28…….

The new Arsenal home shirt is available for pre-order now and available to buy in store from July 3rd.

With thanks to Greg Johnson, Chris Wheatley  and James McNicholas

And loves the club.

A giver and a receiver.

Thank you all at Arseblog News for the lovely coverage! Makes me happy to be a gooner!

Hmm, Theo Pires is 9 atm so maybe in 7-8 years time we can see him debut for Arsenal senior team in a league cup match… One can dream

Where did he get that from I wonder?

That goal against Liverpool when we were down to 10 men still sends shivers down my spine whenever I see it.

You Lucky Sod, You.

The word legend is overused.

He’s the ideal director of football at AFC

God, I love him so much.

Forget sporting director, our most pressing need is Chief of Cones

I misread that as Chief of Clones. Had visions of Alexis x 10 plus Cech taking to the field.