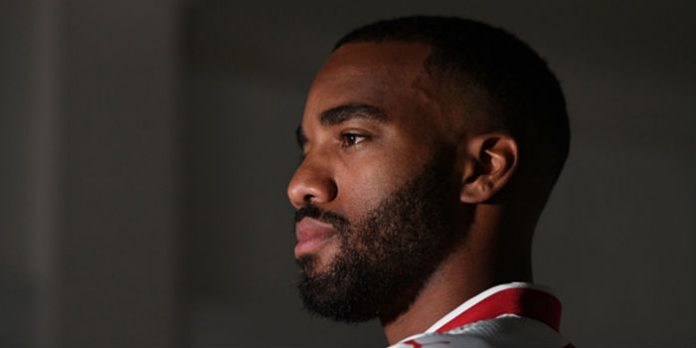 New Arsenal signing Alexandre Lacazette says a chance meeting with Thierry Henry in New York helped him to find renewed focus in his drive to reach the top of the game.

The Gunners confirmed the capture of the France international from Lyon for an initial fee of €53 million – a club record – and he’s expected to join his new teammates in the coming days ahead of the pre-season tour to Australia and China.

Speaking to UEFA.com back in May, the 26-year-old said: “Thierry shook me up. He told me I always have to keep working on myself, which you tend to forget when you’re young.

“When a player like Thierry speaks, you can’t ignore what he’s saying to you. I realised that to be a great player meant permanent hard work. Someone like him always wanted to improve, even with the career he had.”

At the time, Lacazette made clear that he’d only join a club that could offer him Champions League football but appears to have been won over by Arsenal’s style of football and the fact a move to Atletico Madrid collapsed when the Spanish side were hit with a transfer ban.

Elsewhere, former Liverpool and France manager Gerard Houllier believes Lacazette could emulate Ian Wright’s ‘fox-in-the-box’ tenacity. Wright moved to Highbury in 1991 at the age of 28 and went on to break Cliff Bastin’s scoring record inside seven years. He left the Gunners in 1998 with 185 goals to his name.

“He is very mobile, very quick, good in short spaces, has good skill and he scores goals,” Houllier told talkSPORT.

“He was the top scorer in France in 2014-15, the best player in the league in 2015 and has been the best French scorer over the last three seasons.

“He scores more than 25 goals every season. One thing he will bring to Arsenal is goals. His main asset is to score goals.

“He has good technique, is good at using short spaces and is a hard-working player. He can attack, he can defend quickly. I’m not surprised Arsene fancied him.

“He will fit in their game. He will suit their passing game, the way they build up, their approach. He is very good near the box.

“He is a bit like Ian Wright really. You don’t seem to see him and then suddenly he moves.”

Excited by the new arrival, Wrighty took the time to welcome Lacazette to Arsenal by posting on Twitter.

Wrighty and Henry, great players to be linked to!

Lacazette does look a bit like Wright & bearded Henry (aka return of the King) combined. Bang in the goals and we will always love you!

He’s alright I suppose, if world class strikers are your thing. Glad to see we’ve moved quickly to replace Sanogo in any case.

Houllier: “Did I mention he scores goals?”

I think a lot of fans are more excited to see Mad Jens back than any new signings. ?

Author
Arseblog News Hound
Reply to  B B

And when they confirm it, we’ll do another.

And then probably another…because, what a magic it is.

Saw a picture of Jens in Training Arseblog

B B
Reply to  Arseblog News Hound

Ok pedant time. I meant only 1 confirming. The other was reporting speculation. Can’t tell you how how happy seeing the pics of him at training made me.

His return is definitely a magic.

My thoughts exactly. What is the market turning into?

Lacazette a much better fit for arsenal as well and is cheaper than morata or lukaku will be. Also, imo Lacazette is better and more proven than those two as well.

Lukaku scores a lot of goals but seems useless against better opposition.

Anyone else picked up on the #LacaNewSigning hashtag being promoted on the Arsenal website? Presume it’s a pun. Quite witty. Not now that I’ve explained it though…

I’ll take a combination of Henry and Wrighty any freaking time.

The Cassette – Because he’s a bit of old school magic

Easy to forget (admittedly my age plays a part) that Wrighty was so old coming to arsenal. If Mr Cassette can get anywhere near his goal tally he will no doubt be remembered a legend. Fingers crossed and all the best to him.

He was 28 when he came to Arsenal, so wouldn’t class him as so old

Aye, not old old, but I mean relatively for a striker. Feels that most top strikers, particularly those who go on to make goalscoring records, move a little younger. Needless to say moving earlier in a career allows more time to rack up the stats.

To come to a club at 28 years old and break the goalscoring record is some feat to be fair!

B B
Reply to  Dan

Highlights just what a legend Wrighty is.

Now we need to get rid of the deadwood to make space for Mahrez, Carvalho and long term Cazorla replacement

Who would you have go?
(It is a question not a point).

Pleased to see this deal tied up relatively quickly, lot’s of big clubs with CL football and more cash in the market for a striker at the moment and could have easily seen one of them switch their attentions to him if negotiations with their other targets stalled. Also the fact that atletico had pretty much signed him is good given their track record of buying shrewdly.

A lovechild of Wright and Thierry. Swoon 😉

If we play front four of Giroud, Ozil,Alexis and Lacazette it guarantees at least one G.O.A.L. per game 🙂

Son, this is football, not Scrabble 😉

I’ll take a consonant, Rachel please. And another and a vowel and two ‘P’s and ‘E’ 😉

Nothing but Lacazette, Lacazette the last 24 hours.
When is the next signing, that’s what I want to know?
It’s about time Wenger got his finger out!

A different George
Reply to  Johar

I am amazed someone voted this down. I am terrified that there exists an Arsenal supporter with no sense of humour whatsoever.

Wengerballz
Reply to  A different George

Johar
Reply to  A different George

Maybe they spotted that I had the question mark in the wrong place.

In Arse We Trust

Coquelin had a role to play with soft power. Personally hope Le Coq finds some verve this coming season and better balance with either of Ramsey or Granit in deep midfield. Also think Iwobi should try out in that position. Wenger used Per to work on Ozil some seasons past. People only think of transactions as a bid between competing clubs but the player’s aspirations are also crucial. Its a more difficult element to quantify as it is also in many ways based on sentiment. Hope Couqelin kicks on again this season for us. As for Lacazette, considering United are… Read more »