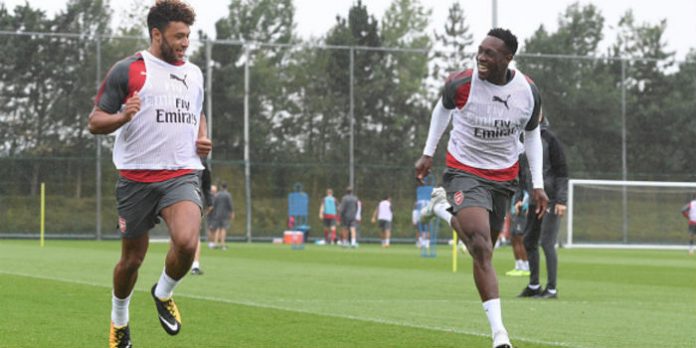 Alex Oxlade-Chamberlain and Danny Welbeck have been selected by Gareth Southgate for England’s 28-man squad ahead of their World Cup qualification games against Malta and Slovakia.

The Three Lions will meet up at St. George’s Park on Sunday before traveling to face Malta on Friday 1 September. Three days later, England will take on Slovakia at Wembley.

The news will come as a boost to Welbeck who hasn’t featured for England since March 2016. Chamberlain scored against Scotland in the 2-2 draw during the last Interlull.

Theo Walcott misses out, but seeing as it’s a tournament year it’s probably better the disappointment sinks in now rather than on the golf course the day the squad for Russia 2018 is selected.

Southgate has included a couple of new faces in his squad, including Nathaniel Chalobah, Harry Maguire and Jordan Pickford.

One man who we won’t be seeing in an England shirt again is Wayne Rooney who retired this week. Despite the Scouse gremlin being Diver McDiverface when United ended Arsenal’s Invincible run, Arsene Wenger praised the striker’s contribution at international level.

“I think it’s the right thing [to retire] because he’s given a lot to England,” Wenger told his pre-Liverpool press conference.

“He’s one of the last of the great generation. He had bad luck maybe not to win the World Cup but it doesn’t take away his great contribution to England. What he has done has been absolutely remarkable.

“I believe that he’s at the stage of his career where he has to focus on the club if you want to play regularly. It’s the right decision.”

At under-21 level, Ainsley Maitland-Niles, fresh from winning the under-19 World Cup, has been included in Aidy Boothroyd’s squad for their opening European Championship qualifications games against the Netherlands and Latvia.

UEFA rules stipulate that players are only eligible to play in the competition if they were born on or after 1 January 1996 which means both Rob Holding (20 September 1995) and Calum Chambers (20 January 1995) are too old.

Good for them, hope they play and impress.

I’m surprised, with your name, that you haven’t pointed out that a couple = 2

“the Scouse gremlin being Diver McDiverface”… Hahaha 😀
This is why i read this blog!

The FA cup Man U Vs Preston where they were losing until Shrek McDiveface “fell” in the penalty box so they scraped through even when Preston were better is a good example of his McDiviness.

Rooney is the only United player that I am fan of. He was the perfect blend of technique, big game ability, passion & aggression.. Same reasons why we love our very own Henry..

Henry was a much better player than Shrek.

How can you compare Henry to an overrated thug

where are the ’19 goals cant sell theo’ sucker fans now???19 goals were not good enough to get him in 28 man squad of england!!!

Feo really needs to move on and start every week for a mid-top team. Then he will be selected.

Enghish team has achieved a lot without Theo, right ? Have so many goal scorers to break down Iceland, right ?

Yes Danny I’ve never struck a clean shot welbeck is a much better option as a fwd. 3 goals is definitely better than 19.

I\'m Professor Ignorance, on that subject
Reply to  Donald\'s Trump

Welbz is only going to be around as a support player, with Kane, Vardy, Rashford, Sturridge, and Defoe, all there as guys who can score.

So yeah, in this case taking Walcott would be far worse, especially as they’ve already got a better version in Defoe, who gets goals and nothing else but at least plays up front instead of weakening the defense down the wings.

god, I hope they don’t get to play lol, this England team is bad enough

Calling Fat Wayne “the last of the great generation” – you can’t say Wenger has lost his sense of humour.

The “great generation” of Wonky Lips Ferdinand, Fat Frank, Fat Wayne, Beat ’em Up abd fet at the Jury Stevie only narrowly missing out on World Glory to teams with the likes of Cannavaro, Gattuso, Pirlo; Xavi, Iniesta and co.
Oh the iniquity of it all…..

Welbz has got to learn to anticipate things better (particularly close to the box) And his finishing needs vast improvement. Against Leicester, Ozil provided a fantastic pass over the top but Welbz technique failed him and he shouldered it over the bar. Later Ox (or someone) gave him a great cut back but he got his feet in a mess. And there was another moment he was through in on goal again (in no part to his own industry) but he took the extra touch and the keeper was able to charge it down. Giroud (for all the criticism) is… Read more »

Ox is heavily criticised but frankly he gives us so much dynamism and is positive charging forward. he does the hard stuff but then fails to provide the crucial final touch is the problem. But the more he plays, the better he will get. If anything Bellerin has been equally culpable defensively and has not been as sharp as the Ox. A lot of the criticism you see on Fan TV sites or here needs a bit of perspective. What’s important is we have Kolasinac whom we should use for intended purpose as LWB. Don’t go trying to change him… Read more »