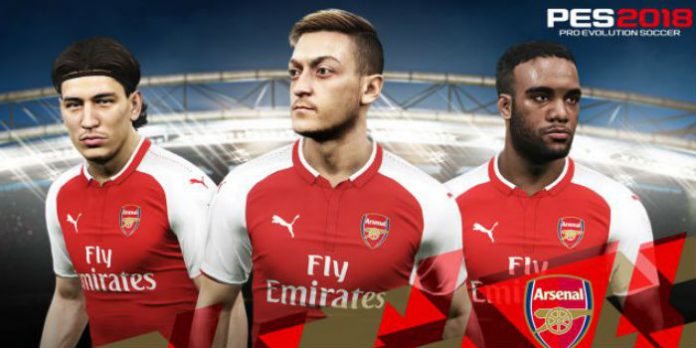 Arsenal have agreed a partnership with Japanese entertainment company Konami – the makers of the Pro Evolution Soccer games franchise.

The agreement will see Arsenal’s first team squad have their facial and physical data captured to ensure the game is as life-like as possible from a Gunners point of view. You’ll also see each player’s running and passing style replicated.

What does this all mean? We’re guessing you should look out for Jack’s bald spot, Shkodran Mustafi playing football on his arse and Granit Xhaka springing opposition counter-attacks with the odd wayward pass. The battle with the FIFA games franchise is truly on.

Speaking about the new partnership, Arsenal’s chief commercial officer Vinai Venkatesham said: “Our working relationship with Konami to date has been extremely successful from a licensing perspective and we are delighted to extend this and welcome them as an official partner.

“We look forward to getting started in the next phase of our relationship with KONAMI and creating some fun and exciting content that both Arsenal and wider football fans will enjoy.”

It’s believed Konami will also have full access to Arsenal’s home at the Emirates Stadium, allowing them to fully re-create the grounds for use within the game. Look out for those A4 ‘Wenger Out’ banners in the next edition of the game.

Oh my god yes. I’ve been mentally debating which one to get this year and this settles it.

I’ve got Bergkamp in my fifa ultimate team !

Can’t see the changes being this year

I wish I could agree. I bought pro evo this year instead of the usual fifa. I edited team names. Manager names. (On xbox) Admittedly on the pitch is fantastic. Much better than fifa but off the pitch there is so much work to be done it just makes it unplayable. Myclub (there answer to FUT) is so far behind even with fifa fixing) I traded it in a week later. And have neither this year. Shame

Both games have their issues for sure.

I really wish Pro would improve the Master League and stop including teams that you can’t edit for some reason. It also needs a few more higher difficulties and for big stars to be a little harder to pick up on frees when they respawn as teenagers.

Ill probably buy Pro, but only once it’s on sale.

Does Arsenal get any cash for this?

Just the box of Celebrations for Christmas

Yes, in the form of microtransactions.

I feel like your missing a SELECT and START at the end of this. Man, I remember Contra! thanks for the flashback 🙂

This means I dnt get to play all my arsenal games at the Emirates. Burger!!

Cheese or regular? And do you want fries with that?

Out of interest, what does this mean for FIFA? We surely will still be in that game? IIRC Germany has a deal with Konami yet theyre in FIFA..though not the Football Manager series. I get a bit confused about this, anyone here who actually knows?

AFAIK the emirates will be a pes exclusive from next year onwards. ac milan/inter and anfield could follow too.

Yes. Every premier league club, player and stadium will be in fifa 18. Pes and Fifa share some teams and leagues. Its complicated and I have no idea how it works. For instance Barcelona and Real madrid are in both games but only Pes features the Camp Nou and fifa has the bernebeu.

FIFA has the Premier League license, which covers all clubs and insignia. They have that locked down pretty tight and are very unlikely to ever let it go, to the detriment of every other football game and all of us.

Games like Football Manager and Pro Evo can sign deals with individual clubs as a workaround, but that’s very expensive and time-consuming. As far as I understand, Pro Evo is allowed to have up to three Prem teams licensed in any one game, before breaking copyright.

Nothing, EA has exclusive deals with FIFA and some whole leagues wile Konami is trying to poke trough their monopoly with separate deals with select clubs.

EA have the Fifa license which includes all the teams under the Fifa banner but Konomi are allowed to strike individual deals with individual teams, eg Arsenal, individual leagues, eg La Liga or individual competitions, eg Champions League.

I have PES2018 and can confirm they already have Wenger Out! banners at the ’emirates’!

What about Gunnersaurus? Will they capture his physical and facial data?

Will Mustafi praying to the referee after conceding a penalty?

I thought it was Lacazette…

Did the facial recognition data system have that smoldering pouty look built in just for Bellerin?

Who cares? Football Manager is the one and only game.

Is that Lemar next to Ozil in the pic?

So now we can play as the Arsenal against North East London. Hmm, actually, maybe I like that they aren’t dignified with a real name.

Horrible news for Fifa fans like myself. This means that more than likely the Emirates will be removed from the fifa franchise like they did with the Nou Camp for Barcelona. What have they done…