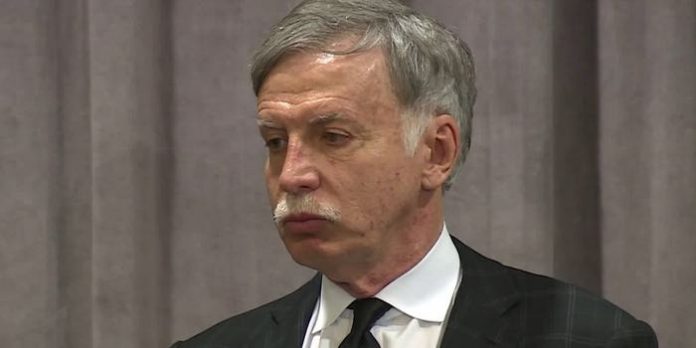 Arsenal, along with Man City, Man Utd, Liverpool, Chelsea and Sp*rs, have had to concede defeat in their attempt to have the overseas Premier League rights money distributed differently.

While the current system sees everyone receive the same amount – last season this was £39,090,596 per club – the sides who traditionally finish in the highest positions were seeking a bigger slice of the pie.

They had proposed that 35% of the overseas income would be pooled and then distributed based on performance and final league position, meaning the higher you finish the more you earn.

This would have adversely affected the majority of clubs, and although Everton, West Ham and Leicester were also thought to be in favour, it would have left them without the required two-thirds majority.

Last month a meeting about this issue failed to reach a conclusion, and ahead of tomorrow’s planned get-together to thrash out a deal, the Premier League have issued a statement accepting no agreement was likely to be made.

Clubs have been discussing the distribution formula for their international broadcasting revenues. The Premier League has facilitated these discussions to bring together the wide range of views which exist. It has become clear there is no consensus for change, meaning tomorrow’s club meeting is not necessary.

The way the Premier League operates, clubs can bring forward a proposal at any time. In the absence of a significant majority in favour of doing things differently, the current rules will apply.

The top six clubs have now moved their interest to a law which stipulates that any club in the bottom half has to play in clown shoes and must donate all their gate receipts to fancy new hats for oligarchs, tycoons and oil barons.

£139m in tv money and a transfer window profit. It’s clearly a more fair way to destitute the TV money (smaller teams matches are rarely on TV abroad) but for the average arsenal fan like us, it would have made no difference. We will not spend the money we have.

Arseblog bang on again with the photo too!

Every Premier League game is televised here in Canada

Of course rubbish clubs won’t agree to these proposals. They want money for nothing and will get the same, no matter which of the bottom 8 places they finish in.

Money for nothing? Do you not think newly promoted teams should be rewarded for getting into the Premier League? Some of them defy all odds to get there and you don’t think they deserve compensation for it?

They spend a season playing giants with unlimited budgets, why shouldn’t they receive money for their efforts? For many it’s a one season thing, they do their best and get relegated yet you want them to have absolutely nothing to show for it?

‘boro were awful last season .awful to watch, got near £100m for their troubles plus the much criticised ‘parachute’ payments….I think the bottom clubs are doing alright. Foreign TV money comes in because of the top 6. we’re levelling the field competitively in the premier league, but are less competitive in Europe as a result. obviously the opposite of that is a stagnant league like in spain, or scotland, its all about balance. clubs that traditionally spend within their means like spurs, arsenal, more recently liverpool…are struggling while the only clubs in europe that are doing well now are the… Read more »

You forget that in Spain the teams negotiate TV deals individually, meaning Barca and Real Madrid gets a huge slice of the cake while the other clubs get nothing, because very few, if any, neutral fans wants to see Getafe – Mallorca. Then you have a stagnant league where the big clubs take everything and the smaller clubs fight for scraps. I’d rather see equal share for all clubs than the Spanish model. Besides, if you think for one second the club would see more of the money then you’re mental. Any leftover cash would go straight in the pockets… Read more »

Christ. Think about it. How fun would it be if the league contained only top six teams. We would lose every single game?

the thing is that if we go through with this with the top six clubs the premier league will loose its competitiveness which was one of the prominent reasons premier league is so popular . because it is unpredictable, any team could beat any team here. if these so calles top six gets there way then the entire league will be monopoly of these clubs and the league will not be that interesting anymore. it would just be like laliga where 2-3 clubs fight for the title , we would never see another leiceter again

Do they also want their cheques for free!?

Good. Even though this would have benefited us, I am delighted it is not going through. What makes the Premier league so great is the fact that we can lose to Watford/Stoke (even though it was just awful and depressing), Manure can lose to Huddersfield, Chelsea can lose to Crystal Palace, Man City can lose to….. never mind! If stuff like this goes through, the gap just widens and the bubble will burst one day.

Man City can lose to us in about 2 weeks time ?

Poor old Stan.
As much as I want us to win the EPL and champions league etc., etc., the competition within the premier league is what makes it special. I may hate getting beaten by Watford but I love watching Utd get beat by Huddersfield. No games are easy. Yes there is a big 6 who dominate but maybe not to the same degree that other big clubs dominate other leagues

Yippee!!!
Love that look of disappointment up there.

Have no idea why they wasted their time with it?
Did they really expect the other 14 clubs to vote for something that would likely reduce revenue?

Trying to skank money from the smaller clubs. Is this the “values” that Gizuseless and Wenger are always crapping on about?

i guess the “value” they talk about is market value!

You know if all sorts of income had been linked to performance, Stan would have put some thought atleast to winning things. As for perspective, i’m overseas and i don’t know anyone following any English club other than the top 6 (it is mostly the original top 4 btw). The top club do invest heavily in our overseas markets so no wonder they want more money from this pool. It makes sense. Doesn’t mean it should happen. Either all incomes should be performance based or none at all. I do have a question though. 6/20 is equal to 30%. Correct?… Read more »

Ironically, another few years of Kroenke, Gazuseless and Wenger and we’ll be in the gang voting ‘no’ anyway

Can someone tell me why Everton, West Ham and Leicester would be in favor of this? Cheers!

I love how the Prem is very competitive. You can’t just count a club to win or lose unless they are in great form like ManC.

I also read somewhere that most of the overseas broadcast games that involve the “big 6”. Don’t they spend more money marketing their clubs overseas to expand their brand? Shouldn’t they be awarded for this? They are helping make the PL bigger commercially.