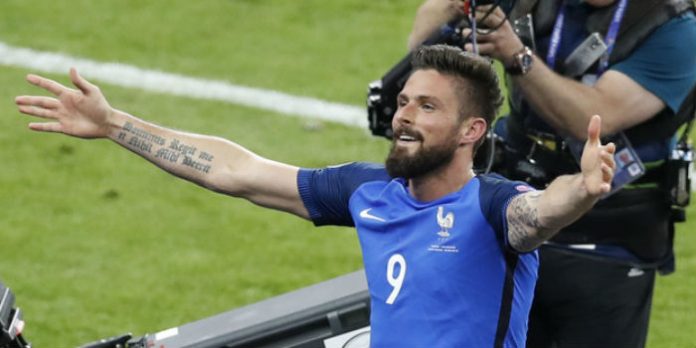 The duo were instrumental in La Paillade’s Ligue 1 title triumph in 2012 and the Morocco international, who was linked with a move to the Emirates around the same time Wenger signed Giroud, says he’s been impressed by the striker’s subsequent career progression.

“For me, Olivier is one of the best forwards in his role,’ Belhanda told RMC Sport [translated by Goal.com].

“He’s someone who keeps the ball up really well, who knows how to make his number 10 or his wingers play because he has a target man game few strikers have.

“There isn’t a striker in the world who’s better than him as a target man. Especially with the France team, he scores, so you can’t hold anything against him.

“At club level, he doesn’t play that much, but when you have a player in the national team who scores and helps the team win, you can’t say anything.”

Giroud decided to stay at Arsenal this summer despite the increased competition for places in attack after the arrival of compatriot Alexandre Lacazette. Les Bleus boss Didier Deschamps will choose between the two when his side continue their World Cup qualification campaign away at Bulgaria this evening.

Several other Gunners have been in Interlull action in the last couple of days. Alexis scored a late winner for Chile as they kept their hopes of reaching the World Cup in Russia alive with a 2-1 win over Ecaudor. La Roja are now third in the CONMEBOL table but still have work to do in an incredibly tight group.

Colombia are clinging to their hopes of automatic qualification but they weren’t helped by two mistakes by David Ospina in a 2-1 defeat to Paraguay.

Elsewhere, Nacho Monreal was an unused sub as Spain beat Albania to seal safe passage to next summer’s showpiece tournament and Aaron Ramsey helped Wales to a 1-0 victory in Georgia.

Also there’s the U-17 going on here in India.. I know not many are following it worldwide, but I am sure excited about it. First ever FIFA tournament here. Does anyone know any arsenal players on show?

Massive untapped potential in India. Should be a very interesting tournament. Hope some of them can get attached to British clubs following Brexit.

No reason why India cannot develop players and the game can be a huge hit if there is significant infrastructure put in.

Emile Smith-Rowe, the only one from Arsenal…Jadon Sancho and steve sessegon other famous names

What do you know? We’ve been after a world class striker for seasons and we had one here all along. What are we like?

He’s done well for a striker who cost 12m. We shouldn’t have had him as first choice for so long and at least should’ve tried to play to his strengths i.e crosses. Don’t think he’s as good at hold up play like most do. He’s good at linking up play, but gets easily dispossessed when he’s on the ball for too long or isolated

By comparison to other league strikers, I think his hold up play is still decent. Remember that he usually starts from the bench around the 70 mins when not so much are happening around him. It could be interesting if we have the data on how many times he got disposesessed when he starts and when he is a sub when there is not so many movements around him.

12m now are not what they used to be

it was 5 years ago, not 10 years, check the most 30 expensive transfers in EPL at all time and you will see that many “world class” players did cost more and some have never been up what their team expected from them. Id like to remember that before we sign Oliver, he ended the year being top scorer in france ahead of Eden Hazard and was playing in France Ligue 2 2 seasons before. AT the end of the day he is a centurion with Arsenal a few games less than it took van Persir to reach it. Based… Read more »

Drogba is no more in the game. Who is the better target man?

Zlatan when fit but I can’t think of anybody else

Haha Zlatan is only a target man because he doesn’t pass to anyone else.

The Ghost of Peter Storey

Should have kept Szczęsny and sold Ospina.

santori
Reply to  The Ghost of Peter Storey

Should have but problem is players have a massive say where they want to go remember? Agents may have a part to play in it too.

GreekGooner
Reply to  The Ghost of Peter Storey

Ospina is a bit exposed due to lack of playing time which is damaging his confidence. I believe in him.

Greaves
Reply to  The Ghost of Peter Storey

The year both of them played in the league with the same defense around them Ospina was clearly the better keeper. So much so Arsene kept on with his playing his second choice keeper in the finals of the F.A. Cup. Since then Szczesny has had more game time and not bit part games but still does more glaring mistakes than Ospina. He cannot even hold down a starting spot for Poland ahead of Fabianski

Why can’t we just sign up Alexis, Mesut for 4 more years and get someone like Griezmann in?
Imagine a front 4 of Alexis, Laca, Griezmann and Ozil with Giroud, Welbz, Iwobi and Wilshere as alternate front 4. That will be the envy of Europe.

Because they don’t want to mate. Just like the striking blonde in my class at school didn’t want to be my girlfriend. Life isn’t fair

Hey, don’t give up yet on that blonde.

Too late. Two kids and a brunette wife in the bag. Just shows if they don’t want to sign, we can replace with different players, with different hair colour

Not all the blondes in the world can make up for the loss of our Lego Man with his amazing hair!

The blonde may have had three kids and have eaten too many chocolate bars and now much less attractive than the brunette.

If the choices are sell for a loss in January or lose for free in Summer and then have to replace, why can’t we offer 350k a week or so, plus say 15m signing on fee? It would be a cheaper option and I’m not sure either of them would turn it down.

Because that’s stupid. And b) they don’t want to stay

Skunk from Nether regions
Reply to  My Wig smells cheesy

That made my day, she wasn’t blonde though but yeah Melody didn’t want to be my girlfriend at school.

Hope this season works out well for him and he stays longer. I really wish he breaks into the team. His response to being dropped usually is a very positive one.

He’s always had a great attitude. I think he’s humble because of where he came from. He’s willing to learn and improve and indeed he has over the seasons. He’s very different from Lacazette so they are not direct competitors but different weapons. I don’t think he has been dropped just Wenger is feeling around a different system with Lacazette. The younger player is the future where Giroud may not continue past the summer is my feeling. Hopefully who we should get is someone like Lacazette to develop into a forward. Regardless of Welbeck, we will need another player up… Read more »

That could be a stadium chant for when he drops another clanger in goals.

To the tune of Tom Jones’ “Delilah”

Much underrated as I’ve mentioned before. Not a plan B but a different type of tool to break defenses down. Should be played more but to his strengths which isn’t just as a flat track bully in the air but also as mentioned a very erudite player you can play off of and bring in the second line attackers as they do with France. He has an extremely delicate touch for a big player, some of his front post finish with deft touches is amazing. But he is also hardworking. That scorpion goal started with him winning the ball around… Read more »

Iwobi scored the winner that qualify Nigeria to the WC. Well done Alex!

and Alex Iwobi scores the goal that qualifies Nigeria for the World Cup.

Shout out to Alex Iwobi whose goal sealed qualification to the World cup for Nigeria.

I think Xhaka scored for Switzerland too.

It looks like Kolasinac and Batshuayi each received a 90′ yellow in Blegium-Bosnia. Don’t know what happened, but I am enjoying thinking about it.