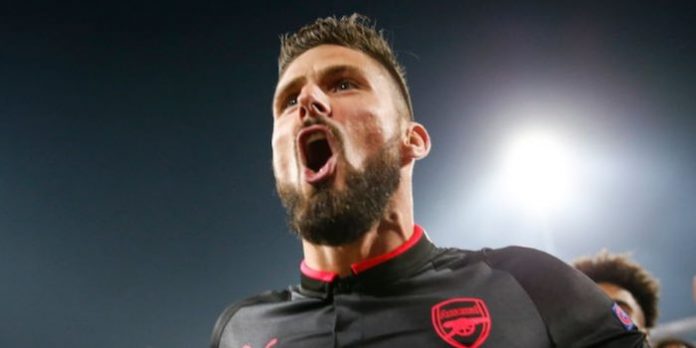 Arsene Wenger says that Olivier Giroud told him the team would score, before the French international popped up with a wonder strike to secure a 1-0 win over Red Star Belgrade.

The Gunners had struggled to fashion too many chances during the game, and it was a dull affair overall. However, the interplay between Giroud, Jack Wilshere and Theo Walcott was enough to break the 10 men down, and afterwards the Arsenal manager revealed that the 31 year old had predicted the goal.

“At some stage he [Giroud] came to the touchline and told me we will score,” he said. “That’s Giroud, he keeps belief when it’s tough.

“That’s why he scores at moments you do not expect him to score.

And what a goal it was too. Watch it here with some fun commentary laughter too.

It brings his goal tally to 101 for the club, and ensured Arsenal’s 100% record in the Europa League remained intact after wins over Cologne and BATE Borisov.

Rate the players in our player ratings here

Of course he knew.
The real OG.

Jack somehow making three players around him disappear into thin air was a delight. Still a special player

Olivier should also score at moments he is expected to score…

SMH you are a bitter fanboy, Geez I guess I’ll just say something stupid like Ozil sucked today lol right???

I’ve said it on here before, Giroud is such a ridiculously good finisher – no one else in this squad would ever even attempt a finish like that.

It’s the mind and imaginative instinct of a (French) striker.

You can’t teach that.

Fair play to Giroud, he was useless all game but that was another wonder goal to his collection.

He had no service all game.

He always brings in the second line.

In this case, the players around him do not know how to use him as much…except Theo and Jack.

Wenger didn’t give this team a chance with the line up. Maitland-Niles on the left, jesus, going forward it’s like we’re playing with 10 men the whole game. Should’ve brought Monreal or Kolasinac on the bench.

Props to Elneny for surviving this game. But you can tell it effect the whole team when you don’t have a solid line up at the back.

Point is, the players bailed the manager out tonight. Despite everything, they stick with each other, protecting one another, and the quality of the front three finally prevail.

How did the players bail out the manager? Wenger should have signed a CM in the summer put he has got the points and a rested 1st team ready for the weekend. I would rather see Monreal and Kolasinac fresh for the premiership.

WTF would you bring Nacho or SK to only have them come off the bench? lol

@rg21 the players bailed him out because the set up of the team is messed up. The system doesn’t suits the players we got, makes matters worst by playing some of them out of their natural positions.

@caligunner for a simple ease of mind to the youngsters and when things go bad we have players to call for. Thankfuly it didn’t go to that.

& do we need 2 left back playing at the same time on the PL anyway? The system is weird.

Uh, actually that’s just good management. Rotating players and all that. Nice to see the squad delivered on expectations. Our B-string should absolutely be able to beat some of these Europa teams, even if it isn’t so easily done as it is said.

Handsome goal. Just like the Bloke who put it away.