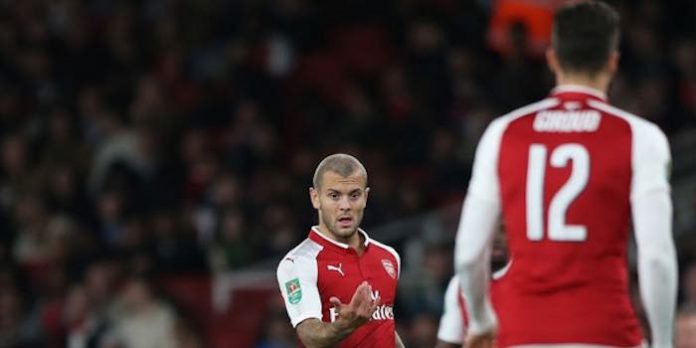 Last night, not for the first time, Jack Wilshere and Olivier Giroud found themselves on the same wavelength to create a wonderful Arsenal goal.

Amazingly, the superb strike in Serbia came four years to the day that the duo got together to do this against Norwich in the Premier League:

Speaking afterwards, Wilshere spoke about their connection, and how it can pay dividends for the team.

“I think he knows how I like to play and I know how he likes to play,” he said.

:He knows that I like to pick it up and drive at the defence and he always gives me an option when I pick the ball up he seems to hold position up well, he’s strong when he holds the ball up and we play off each other well.

“We did that again tonight with Theo and we’re happy, we came here we know the fans came a long way so we’re thankful to them and we wanted to give them something to cheer about after the weekend and we did so we’re happy.”

Although it wasn’t the most scintillating Arsenal performance of all time, the 1-0 win made it three wins from three in the Europa League, and it did come from what was a pretty makeshift side.

Asked afterwards if he felt it had gone some way to answering the criticisms leveled at the team by Watford’s Troy Deeney last week, Jack continued, “Yes I think so, I mean I said yesterday in our press conference I don’t think anyone can question our character.

“We showed that tonight, you know it’s a tough place to come I don’t think they’ve lost here this season, we knew that before the game and we knew that they were going to be up for it.

“It’s one of the noisiest stadiums I’ve played in my career and of course they’re going to be up for it.”

No arguing against the win, but a bigger test of character will come on Sunday at Everton when the players culpable for the defeat at Watford will have to show what they’re made of.

For more on Wilshere, the Europa League and Sunday’s trip to Everton, check out today’s Arsecast

Just keep on showing it, week after week, even when times are tough.

No doubt people will still complain if we lose but at least we won’t be saying that the team are weak and not putting in the effort.

It is difficult to judge whether Jack is Premier League ready yet, and I’m not so sure he will get a game considering he played last night, but surely if he keeps putting in performances like that he has to be strongly in the managers thoughts to at least come off the bench. What I liked most about his performance last night was the fact he took responsibility. He clearly realised his game needed to show maturity, and that’s exactly what his performance displayed. Constantly wanted the ball, dug in, and when we need a moment of magic he stepped… Read more »

Love that jacky boy is back in the fold. Long may it continue

These two goals are seriously amazing.

wilshere has two things I’m certain of … balls and talent. I can only hope the injuries will seize

Nachos in Montreal
Reply to  keneh

*cease…unless you mean that the injuries will seize Sp*rs.In which case I hope so too

In the Premier league that is.

I just want ozil to be dropped then sold

Yep leave for 15M Euros in January with no loyalty bonus. Or enjoy reserve team football and watching the World Cup on tv

Lol you think if he was dropped from the team that JL wouldn’t still use him for the World Cup? smh

Its a pity you don’t appreciate the most creative player in the country. The best international team in the world have no problems playing him

Was great seeing Jack with that drove towards the end of the game.. It really opened up for him.. And he holds that ball so well..

If you like football, you’ll like Jack Wilshere. Many on here wanted him sold, I suppose it’s easy to forget what he can do when he hasn’t played for so long. His route to the first team is somewhat blocked though, and his skillset wouldn’t really help solve our problems at CM/DM in the 343 (i.e. winning the ball back). I think a change of system is long overdue though